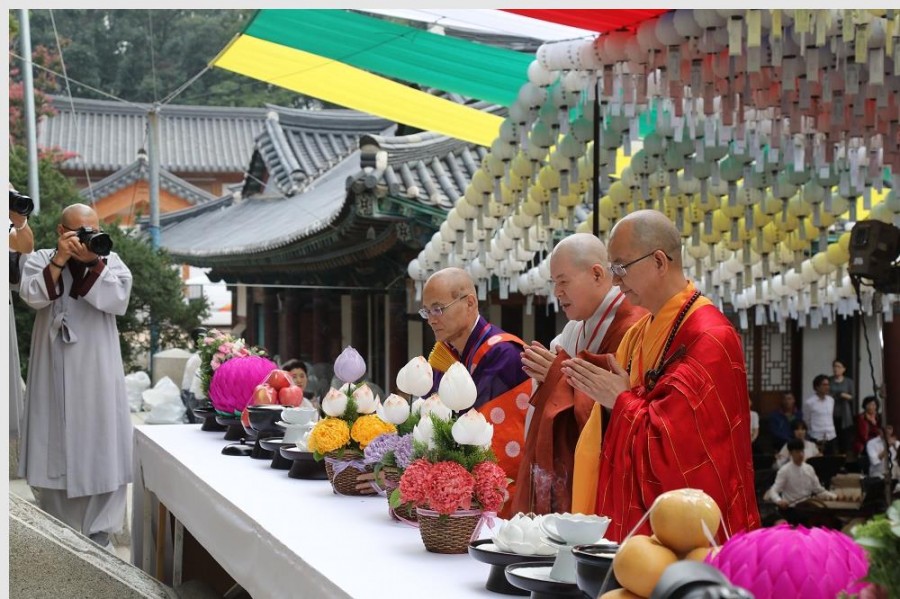 The Dharma Assembly for World Peace on the occasion of the 20th Korea-China-Japan Buddhist Goodwill Conference was held at Bongeunsa, a temple with more than a thousand years of history. On September 7, approximately 300 Buddhist leaders and Conference participants from Korea, China and Japan prayed for world peace, harmony and mutual growth of humanity at the courtyard in front of Daeungjeon (大雄殿 Hall of the Great Hero) of Bongeunsa. The Dharma Assembly attendants reaffirmed their commitment to working hard for sustainable Buddhist cultural exchange and further development of the trilateral Buddhist communities.

Ven. Jaseung, President of the Association of Korean Buddhist Orders and the Jogye Order, asked for steadfast dedication to Dharma propagation for harmony and coexistence of humankind through his message for world peace. He also highlighted the need for gathering wisdom of all Buddhists for peace and prosperity on the Korean peninsula.

The President of the Association said, “Buddhism has been with the peoples of the three countries throughout the long history. The Buddhist values of mercy, equality, co-existence and world peace facilitated forming relations among the three countries, while also significantly contributing to building a stable framework for peace of the past, present and future in Northeast Asia. Today, we are faced with numerous global challenges, including conflicts and wars, environmental change, decrease in population, hunger and etc. Co-existence and harmony are losing their grounds and the current crisis cannot be resolved without recovering universal values of humanity.”

Ven. Jaseung also highlighted, “I ask for your continued support for peace and prosperity to wisely resolve the recent military tension on the Korean peninsula. We unwaveringly resist any activities that undermine peace on the peninsula. We all need to be reminded once again that the path toward peace does not exist in hostility and threats against each other.”

The President of the Association and Jogye Order concluded his speech, “Everything starts from respect and dignity for all living beings, thoughtfulness for family members and neighbors and willingness to do small things right. In order to let these values more widely known and practiced, let us diversify the channels of Dharma propagation customized to the people in the modern world. A number of brilliant minds of our time are paying attention to spiritual culture of Asia, including Buddhist philosophy and values. I sincerely hope that the 20th Trilateral Buddhist Goodwill Conference could be successfully concluded so that it can serve as the momentum for restoration of culture and spirit of Buddhism.”

Ven. Ming sheng, President of the Buddhist Association of China, said, “I pray for world peace and happiness for humanity with the supreme merit of dedicated Buddhist chanting and recitation of sutras by the devoted members of the Buddhist communities of the three countries. It is my sincere hope that all living beings can be merited by taking refuge in the Buddha, Dharma and Sangha. I aspire to live in a peaceful world without war and calamity.”

Ven. Take Kakucho, Chairman of the Japan-Korea International Buddhist Exchange Association, said, “The Buddhists of the three countries sincerely hope for stability in East Asia and world peace. At the 20th Trilateral Buddhist Goodwill Conference, the attendants reaffirm their commitment to realizing peace and working hard for Dharma propagation by further developing exchanges and solidifying unity of mind.”

Ven. Wonmyeong, the abbot of Bongeunsa, said in his welcoming speech, “On behalf of the monastics and lay Buddhists, I am privileged that the Dharma Assembly for World Peace is held at Bongeunsa on Sudosan, which has served as the temple for revival of Korean Buddhism for 1,220 years. It is my sincere hope that today’s Conference could serve as an opportunity to open up the era of co-existence for religious harmony and world peace.”

At the Dharma Assembly, where the participants of the three countries reaffirmed their friendship and sense of united community as Buddhists, Korean, Chinese and Japanese Buddhist ceremonies were solemnly performed. All the attendants at the Assembly sincerely prayed for peace on the Korean peninsula and happiness of human kind at the courtyard in front of the Hall of the Great Hero of Bongeunsa. The delegates of the three countries had their meals following the principles of the Korean formal monastic meal (barugongyang) after the Assembly at Bowoodang.