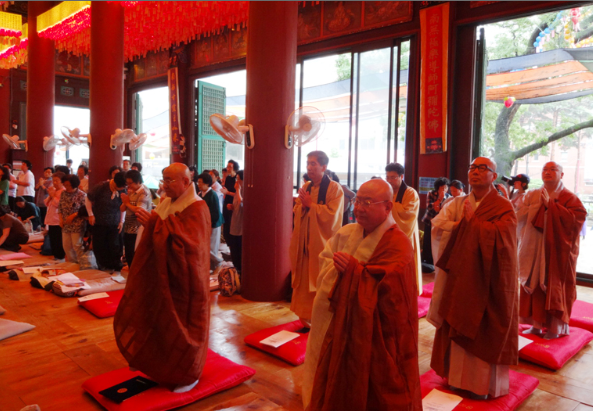 A Dharma assembly for peace and reunification on the Korean peninsula marking the 72nd anniversary of the Republic of Korea’s independence was held amid mounting tensions between the two Koreas following the North’s recent launch of ICBM and confrontations between the U.S. and North Korea leading to even a word of possibility of a war on the peninsula.

The Association of Korean Buddhist Orders and Office for the Promotion of National Unity of the Jogye Order hosted the Dharma assembly with aspiration for peace on the Korean peninsula at the Hall of the Great Hero of Jogyesa at 1 p.m. on August 15. Due to strained inter-Korean relations, unfortunately, simultaneous Dharma assemblies for reunification in the North and the South could not be held. Even though a Buddhists’ letter of aspiration for reunification, which used to be jointly announced in the two Koreas, could not be adopted, approximately 150 attendants at the Dharma assembly continued their prayer for reconciliation, peace and reunification on the Korean peninsula.

Ven. Beopta, the Chairman of the Office for National Unity, asked for relentless commitment to co-existence, mutual growth and cooperation for peace, while warning the danger of military confrontations. He also highlighted through his speech, “The North’s nuclear tests and ICBM launch led to mounting tensions and sense of crisis on the Korean peninsula. The escalating dispute between the U.S. and North Korea is like two cars racing toward each other. It feels that we are unprecedentedly on the brink of a war. Military responses cannot be solutions to resolving conflicts on the peninsula and hostile confrontations only prompt another war and collapse of all. We need to overcome crisis and achieve peace in the spirit of co-existence, mutual growth and cooperation.”

Ven. Mancheong, the President of the Daegak Order and Vice President of the Buddhist Orders Association, prayed for reconciliation, peace and reunification of the Korean peninsula in front of the Buddha statue at the Hall of the Great Hero. The Dharma assembly was highlighted by the attendance of the representatives of inter-Korean relations organizations and leaders of the Buddhist community, including Ven. Beomsang of the Daegak Order, Ven. Deokun of the Jingak Order and Ven. Hyeryang of the Jogye Order Social Affairs Department.