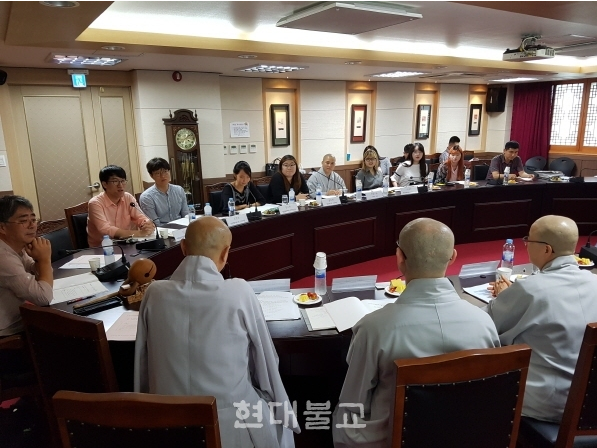 The Headquarters of the Jogye Order’s Affiliated Organizations for Far-sighted Plans collected opinions about solutions to the challenges that young people are faced with in order to set policy directions with the upcoming launch of the Committee for Future Generations. A variety of youth groups appealed for support and interest of the Buddhist communities regarding youth unemployment and housing issues.

The Preparatory Body for the Committee for Future Generations (Chairman Ven. Shimsan) held a meeting with young leaders on July 18 at the Dharma Propagation Hall located at Gyeonji-dong, Seoul, under the theme of “Asking future generations about the role of the Buddhist communities”. The representatives of several youth organizations, including Chairman Kim Heesung of Seoul Youth Policies Network, Mr. Jo Hyunjun, Vice President of Min Snail Union, Activist Kim Soyeon of Life and Peace University, Vice President Song Hyowon of Youth Community Union, Secretary Lee Chae-eun of Korea Buddhist University Federation and Ven. Seonyeop of Gubongam hermitage made presentations on policies, housing and jobs for youth, young people in rural areas and the role of Buddhism for youth.

Kim Heesung pointed out repetitive forms and institutions of youth policies, while paying attention to increasing plans for youth in society in recent years. Mr. Kim said, “Transformation is urgently needed to ensure that institutions and policies can guarantee quality life of young people. Challenges of those in their 20s and early 30s are no longer their own issues, necessitating proactive social solidarity and cooperation. I look forward to continued discussions on related issues among religious groups, including Buddhist communities.”

Mr. Jo highlighted that solving housing problems could serve as a linkage to resolving overall housing issues in society. He said, “Bold paradigm shift toward comprehensive housing and welfare policies including the targets which have been neglected so far and new measures is definitely required. What is also needed is the work to carefully prevent repeated conflicts between landlords and tenants and between older generations and young people.”

Ms. Song Hyowon said, “Public services for young job seekers, unemployed youth and young people who want to secure positions in the labor market but cannot do so need to be more proactively explored.” The Vice President also added, “A safety net should be established so that young people can endure extended period of time required to enter the labor market. One solution is strengthening linkage between social resources and youth through a variety of networks.”

The Preparatory Body for the Committee for Future Generations decided to hold a launching ceremony of the Committee on August 30 at 7 pm at the precinct of Jogyesa. The Buddhists’ charter for future generations will be announced on the launching day, while dinner will be served for youth civic groups over cultural performances.

Meanwhile, the Future Generations Committee will be comprised of a total of 21 members (7 monastics who are serving as Preparatory Body members, 7 lay Buddhists and 7 experts). For lay Buddhist members, members of the Preparatory Body and recommended personnel will join the Committee, while experts will be recommended by the meeting participants and others. The list of the Chairman and members of the Committee will be finalized around mid-August or at the end of August.