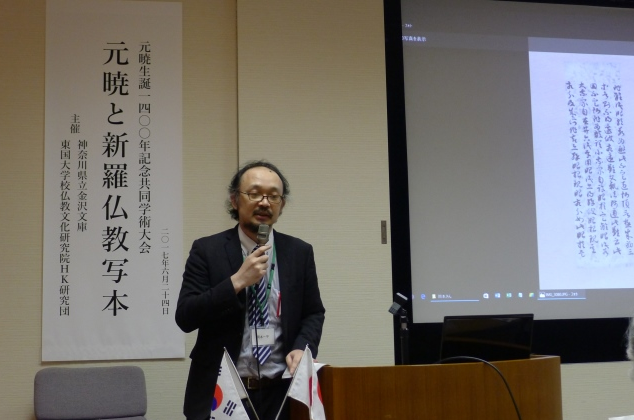 Marking the 1,400th anniversary of the birth of Great Master Wonhyo, the Korea-Japan Joint Symposium was held under the theme of “Wonhyo and Silla Buddhist Manuscripts” on June 24 by the HK Korean Buddhism Research Institute of Dongguk University and Kanazawa Bunko Publishing affiliated to Kanagawa Prefecture in Japan.

Director Kim Jongwook of the Institute, who is leading the HK research projects on Buddhism, said, “We have worked hard to firmly establish the standing of Korean Buddhism in the discourses on East Asian Buddhism while conducting several projects over the last 6 years. This symposium is being held as part of the initiatives to make Korean Buddhism more widely known in the global arena. I hope this event can serve as an opportunity to allow attendants to recognize significance of Buddhism in Korea and Japan respectively.”

Mr. Yuyama Kenichi, Head of Kanazawa Bunko, said, “Some of the manuscripts or woodblock-printed Silla or Goryeo Buddhist books stored at Shomyoji, which is under the management of Kanazawa Bunko, are the only remaining ones or the oldest extant ones. The themes covered at the symposium are mostly on the books and sutras currently owned by Kanazawa Bunko, which makes the event all the more meaningful.”