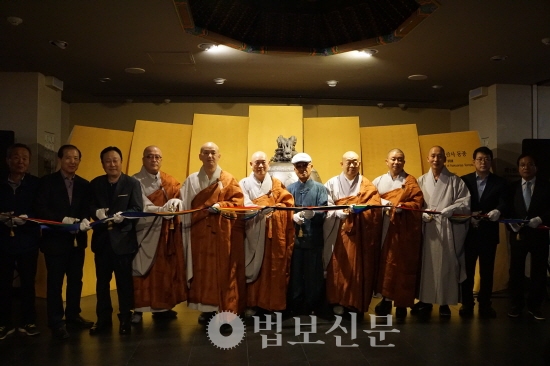 A special exhibition on Korean Dharma bells from the Unified Silla to modern periods has been opened.

The Central Buddhist Museum holds a themed exhibition called “Dharma Bell, the Resonating Sound of Wisdom” from June 21 to August 20, 2017. At the exhibition, twenty outstanding Dharma bells of each period, such as the Small-sized Bronze Bell of Haeinsa and Bronze Bell of Gimryongsa, and twenty-five rubbings of Dharma bells are displayed. It is all the more meaningful that the exhibition showcases both restored bells and reproductions by Mr. Won Kwangsik, Jucheoljang, or bell casting master (National Intangible Cultural Heritage Asset No. 112), who is known to have exceptional skills of casting Dharma bells in Korea.

The exhibition consists of four sub-themes: ‘Unified Silla Period: Transmitting Celestial Sound’, ‘Goryeo Period: Encapsulating the Buddha’s Teachings’, ‘Joseon Period: Giving Ear to All Kinds of Sounds’ and ‘Modern Period: Reflecting Aspiration for Protecting the Nation’. The four chronological sub-themes reflecting distinctive characteristics of each period make the exhibition easier to understand to visitors. Dharma bells cast in the Unified Silla period, known to have the deepest resonance out of all Korean Dharma bells, are adorned with celestial nymphs playing musical instruments while descending on clouds. The illustration of celestial nymphs shows the intention to soothe chaotic secular realm through the sound of the Buddha. Prime examples include the Bronze Bell at Unjuji of Japan and Bell Excavated in Seolimwon Temple Site in Yangyang County. The embellishments of Buddha triad and Buddhist sutras are easily found on Dharma bells of the Goryeo period. Along with the popularization of Buddhism, the number of small-sized Dharma bells increased significantly and a variety of patterns were used to depict essence of the Buddha’s teachings, which the Small-sized Bronze Bell of Haeinsa and Bronze Bell of Naesosa well represent.

Ven. Hyunjo, Director of the Central Buddhist Museum, said, “It is said that the sky and earth were shaken when the Buddha gave his first teaching. It is not different that Korean Dharma bells have long been transmitting spiritual elation to sentient beings with their majestically resonating sound. I hope this exhibition which sheds a new light on Dharma Bells of Korea allows the resonating sound of wisdom to be delivered to many visitors.”