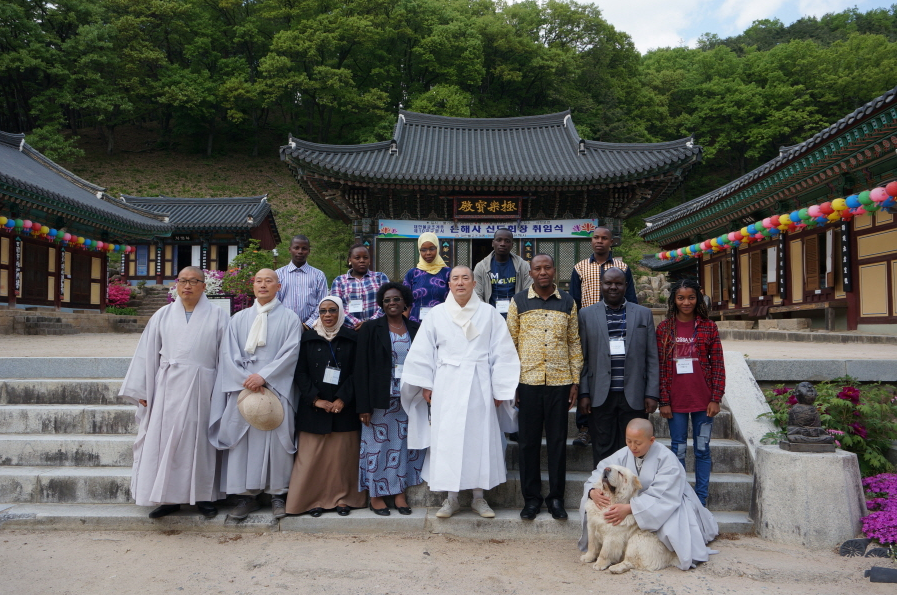 On April 26, the Tanzanian delegates attended the Dharma ceremony on the first day of the fourth month of the lunar calendar at Bongeunsa and Anguk Seon Center in Seoul and Hongbeopsa in Busan, delivering their message of gratitude for the support the temples have offered to Borigaram College.

On the next day, April 27, they joined the Templestay program at Eunhaesa, the Head Temple of the 10th District of the Jogye Order, enjoying a hands-on experience of traditional Korean Buddhist culture, including a Buddhist ceremony, Seon meditation, 108 prostrations and a visit to Baekheungam hermitage.

Ven. Dongwan, the abbot of Eunhaesa, and the Buddhist monks at the temple warmly welcomed the visitors from Tanzania. Ven. Dongwan gave the delegation photographs of Gatbawi, a large Buddha statue on Mount Palgong, and prayer beads as souvenirs. He said, “I hope your time at a traditional mountain monastery in Korea could be a memorable experience in your life. I heard that the students even received the five precepts at the lay Buddhist ordination ceremony yesterday. I was informed that the Buddha’s teachings on dignity and equality prompted you to know more about Buddhism. It is my sincere hope that taking precepts could enhance your understanding of Korean Buddhism and you could contribute to developing friendly ties between our two countries in the future.”

With the giant lanterns adorning the open yard of the Treasure Hall of Supreme Bliss and flowers dotting the temple precinct, the Tanzanian public officials, teachers and students were continually mesmerized by the beauty and serenity of the traditional Korean mountain monastery, which they visited for the first time in their lives. Even during the short breaks, they preferred to keep taking photographs of nature instead of taking a rest.

Ven. Yongju guided the Tanzanian visitors to the Treasure Hall of Supreme Bliss and the Shrine of the Mountain Spirit. The delegates, full of curiosity, bombarded Ven. Yongju with endless questions, such as “Why are there so many Buddhas in Buddhism?”, “What is the meaning of the Buddhist paintings in the Buddha Halls?”, “What do the elephants symbolize?”, “What is the meaning of the five colors used for decorative paintwork?” At the Museum of Eunhaesa, the researcher gave an introduction on the Buddhist Guardian Deities of Daejeonsa, which was recently returned to the temple, and Shortcut to the Rebirth in the Pure Land by Chanting Buddha Mindfulness (Treasure No. 1857) of Eunhaesa, deepening the delegates’ understanding of Korean Buddhism.

After taking a tour around Eunhaesa, Maduhu, 21, the student president of the Borigaram College, said, “It is impressive that the natural environment around the temple is well-organized and that the temple has been maintained even after several generations.” As he studied Korean for a month before this trip, he could easily read Korean texts on banners and shared his hope to study and work in Korea after his graduation.

The participants put the temple etiquette they had learned from Ven. Seungwon into practice by doing a half bow with their palms together when greeting Buddhist monks and entering Buddha halls. While the teachers and students had been exposed to Buddhist culture through Seon gymnastics taught by Ven. Seong-yu at the Borigaram College, public officials, who were Catholics or Muslims, found Buddhism still unfamiliar. Ms. Mponzi, the eldest among the group, showed her open-mindedness, “I am a Catholic, but wanted to experience Korean Buddhism and I am learning a lot from the Templestay program. Getting to know the different cultures of countries around the world is very interesting.”

The second day of the Templestay at Eunhaesa began at 4:00 am. Waking up early to attend the Buddhist ceremony at dawn, the participants headed to the Treasure Hall of Supreme Bliss. The temperature at a mountain temple even in April must have been unusually cold for them, considering that the lowest temperature of Dar es Salaam, where Borigaram College is located, is 18 degrees Celsius. Bundling up in blankets, they attended the ceremony and performed 108 prostrations and Seon meditation amid reflective tranquility. As Ven. Seong-yu had let the students know in Tanzania that the Templestay program included the practice of 108 prostrations, they learned and practiced how to prostrate before their visit to Korea. With pure curiosity and diligence, the students were ready to perform what they had thoroughly prepared, even godurye, the form of the final prostration, and chasu, the posture of folding one’s right hand over one’s left hand at center of the belly.

Members of the Eunhaesa community made thoughtful preparations of food and bedding to ensure a comfortable stay at the temple for the very special guests. Importantly, Baekheungam hermitage, which is opened to the public only twice a year, on the Buddha’s Birthday and All Souls’ Day, welcomed the visitors from Tanzania. The participants relished the beauty of spring on Mount Palgong while hiking a trail called “Sorigil (trail of sound)” with Ven. Beopmun and Ven. Seunghwan. Sitting on a gentle slope, the trail is conducive for pilgrimages, and starts from Eunhaesa, leading to mountain hermitages, including Gigiam, Jungamam and Baekheungam. On their way to Baekheungam, the Buddhist monks and participants conversed amicably and enjoyed the serenity of nature. The Tanzanian delegates’ Templestay concluded by drinking clean water at Baekheungam, known as the place where the purest water flows in the Mount Palgong area, and a tea ceremony with the abbot.

Ven. Seungwon said, “I hope the Tanzanian delegation’s stay at Eunhaesa could be remembered as happy moments in their lives. I pray that the continued development of the Borigaram College and the ties between the Tanzanian delegates and Korean Buddhism will last for a long time.”

From April 29 to 30, students of Borigaram College, wearing traditional Tanzanian costumes, participated in the Lotus Lantern Festival and traditional cultural events. They introduced their school to visitors at the cultural events, while also cooking and distributing chapatti.

Tungu said, “Traditional cultural events are very interesting and fascinating. I hope many Koreans could be interested in and support the Borigaram Agriculture Technical College.” Milmba also said, “It is very impressive to see that people from all around the world came together and enjoyed the Lotus Lantern Parade and traditional cultural events.”

After learning about advanced agricultural technologies at the Korea National College of Agriculture and Fisheries on May 1, the Tanzanian delegates attended the Buddha’s Birthday Dharma Ceremony at Jogyesa on May 3 and returned to Tanzania on May 4.