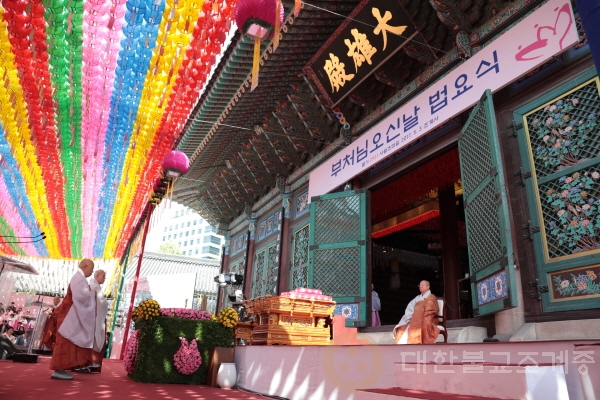 Dharma ceremonies were held at Buddhist temples all over Korea marking the 2017 (Buddhist Era 2561) Buddha’s Birthday. The participants reaffirmed their commitment to making a world without discrimination and leading their lives with sense of responsibility wherever they are. At Jogyesa, Supreme Patriarch Jinje, Acting Head of the Council of Elders Semin, President Jaseung of the Jogye Order and more than 10,000 participants celebrated Buddha’s Birthday together.

Among the invited participants were Mr. Seong-wook Kim, the father of the late Cho-won Kim, a teacher who lost her life during the Sewol ferry disaster, Father Zacchaeus, who is leading the Solidarity for Enactment of the Anti-Discrimination Act, Udaya Rai, the President of the Migrants’ Labor Union, Seung-hyun Lee, a representative of LGBT people in Korea, and Jaechoon Lim, a laid-off worker. On behalf the congregation, they made offerings of flowers to solidify the aspiration for a world without discrimination, making the Dharma ceremony all the more meaningful.

As the ceremony was held six days prior to the presidential election, leading presidential candidates, including Jae-in Moon, Joon-pyo Hong, Cheol-soo Ahn and Sang-jung Shim, attended the event with their palms together following Buddhist etiquette, accompanied by much media attention. Seong-min Yoo, known as a Buddhist, visited Donghwasa in Daegu, while his wife took part in the Ceremony at Jogyesa.

The Dharma ceremony began with the temple purification ceremony, six offerings, striking the Dharma drum which symbolizes eliminating sentient beings’ ignorance, and striking the Dharma bell with a vow of enlightenment. The ceremony also included the three-fold refuge ritual, chanting the Heart Sutra in Korean, bathing the baby Buddha statue, and a Buddhist blessing and offering of candles, incense, flowers and tea. In addition, there was a prayer by Ven. Jihyun, the abbot of Jogyesa, a congratulatory speech by Ven. Jaseung, the president of the Jogye Order, a Dharma speech by the Supreme Patriarch Jinje and a prayer by the president of the Lay Buddhist Association for the Jogye Order. Significantly, the Buddhist blessing was joined by student members of the Young Peoples’ Dharma Assembly of Jogyesa, children raised by grandparents and children from Seunggawon (a social welfare organization), multicultural families and the Jungjin School (an institute for special education).

During his congratulatory speech, Ven. Jaseung said, “Knowing the true meaning of this year’s theme of Buddha’s Birthday, ‘We Can Make a World without Discrimination’, will open up the path toward wisdom and compassion. Everyone is the master of one’s own life with their true self.”

He also highlighted, “The world of the Buddha can be seen in the collars of workers, who sweat for the sake of this world of abundance; the smiles of entrepreneurs, who practice the life of sharing; the hands of farmers, who earnestly harvest the seeds they sow in nature; and the arms of all people, who embrace their suffering neighbors. This is the life for us – we protagonists, treating everyone like Buddha, and removing all prejudices from our family, workplace, and society.”

Ven. Jaseung also added, “We are at a crossroad which requires us to put an end to the history of division and conflicts and to usher in an era of reconciliation and unification. In addition, we need to create a society where there is no pain of isolation and abandonment and to guide all citizens toward an era of harmonious coexistence, without fear of war.” Ven. Jaseung concluded his speech, “Ultimately, with the mindset of Buddha, we can attain peace in the global community, the happiness of our people, and the safety of our country, if we can solve the predicament of our nation - all the conflicts of society and the confrontation of the two Koreas. We can take on a leading role in achieving a world of harmony.”

Supreme Patriarch Jinje delivered his Dharma speech, “Today is a day filled with bliss, as it is a time of celebration for the spiritual culture of humanity. On this day, the birth of Buddha took place through the light of wisdom, in the mundane world of ignorance. For sentient beings, drowning in the sea of suffering, he has declared the true identity of self with great compassion, and has made clear the true nature of all living things in the Dharma realm of the universe. He manifested himself in the form of the living to achieve his great aspiration, even dying in the secular world to demonstrate that all sentient beings are inherently Buddhas. Once they let go of their ignorant attachments, they will realize that there is no life or death to begin with.” Ven. Jinje asked all participants to seek, and seek some more, their true nature before they become independent from their parents, whether they are awake or asleep in their everyday life.

Acting President Kyo-ahn Hwang, in his congratulatory message, which was read on his behalf by Acting Minister of Culture, Sports and Tourism Sookeun Song, highlighted the significant role of the Korean Buddhist community towards the unity of the public going forward in the spirit of harmony and resolving controversies of Buddhism. He also acknowledged the contribution of Korean Buddhism towards the development of spiritual and traditional culture in Korea.

Mr. Kee-Heung Lee, the President of the Lay Buddhist Association for the Jogye Order, read out the letter of aspiration on behalf of the laity, making a vow to lead a harmonious life by resolving conflicts.

Meanwhile, the awards for Buddhist devotees were also presented to encourage the lay Buddhists who have dedicated themselves to Dharma propagation and the further advancement of Buddhism. Ven. Jaseung presented the awards to Mr. Dongseok Ahn, a lawyer, Dr. Geum Nana Geum,, a beauty contest winner-turned-scholar at Harvard University, Mr. Yong-dae Lee, a former professional badminton player and Mr. Sangseok Jeong, a poet.