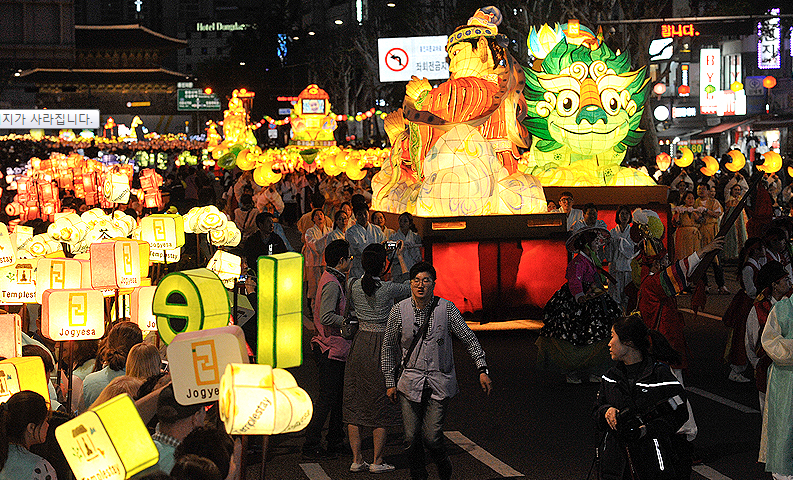 On April 29, 2017 (Buddhist Era 2561), in celebration of Buddha’s Birthday, the Yeon Deung Hoe, also known as the Lotus Lantern Festival, kicked off with great fanfare at Dongguk University Stadium.

This year’s Lotus Lantern Festival had the theme “We Can Make a World without Discrimination.” It was assembled to create a stage full of genuine joy, with all participants together, eliminating stereotypes and discrimination, and encouraging thoughtfulness for others. A Buddhist Cheer Rally marked the opening of the festival and centered on the performance presented by Yeonhuidan, the Lotus Lantern Festival dance group. With increased numbers of participants this year, the Yeon Deung Hoe Preservation Committee arranged more seats to accommodate as many audience members as possible.

Yeonhuidan, composed of children, teenagers and those in their 20s and 30s, caught the attention of audience members with their smiles and cheerful dance; they had practiced earnestly for a year for this performance. Those in the audience were encouraged to join in this year’s performance and responded with joyful applause.

Following the performance of Yeonhuidan, the Dharma Assembly for the Lotus Lantern Festival was held and joined by more than 10,000 participants. The Dharma assembly began with the tradition of bathing the baby Buddha. It continued with the official opening statement, the three-fold refuge, and chanting of the Heart Sutra in Korean. The assembly also included opening remarks by Ven. Jaseung (Chairman of the Celebration Committee for Buddha’s Birthday), chanting the sutra in celebration of the Buddha’s Birthday by Ven. Wonhaeng (Chairman of the Central Council of the Jogye Order), recitation of the aspirational prayer by Ven. Hongpa (Kwanum Order’s Administrative Head), and chanting of the wishes of the Budhist laity by Ven. Choon Kwang (Executive Director of Administrations for the Cheontae Order of Korean Buddhism) and Hoeseong Jeongsa (Head of the Jingak Order).

During his opening remarks, Ven. Jaseung said, “We hold lotus lanterns high hand-in-hand to drive out darkness of the world with the light of our minds. This light ignited up by our pure minds helps us realize where we are and awaken to the truth that we live in harmony with our neighbors.” He also added, “The smiles on our faces light up the brightest lantern for the world. With this lantern in mind, sharing happiness and helping the less privileged around us leads to achievement of utmost merit and encourages us to learn that we are the true masters of our lives. This attitude and practice will solidly guide us to create a society where all citizens can lead rewarding lives and to turn painful inter-Korean confrontation into mutual growth of the two Koreas.”

Ven. Jaseung highlighted, “We are the ones who serve as masters of infinite life and lead the way to happiness for all people, prosperity of the country, and world peace. It is my sincere hope that the world of infinite light can be opened up, as we light up the path of wisdom which lets all living beings know that they are the true masters of their lives and the path of compassion which shares others’ sorrow.”

Ven. Wonhaeng, Chairman of the Central Council of the Jogye Order, reminded the audience of the true meaning of the Buddha’s Birthday by chanting the verses of Buddhacarita, which is about the Buddha’s coming to the world and saving sentient beings from the ocean of pain and suffering.

Ven. Hongpa, Kwanum Order’s Administrative Head, read the aspirational prayer, “Marking the Buddha’s Birthday, we are here with more sincere aspirations than ever before. Technological and materialistic advancements in the world have continued, unintentionally creating ceaseless competition and materialistic desire. As a result, we are in the midst of suffering with confrontations and conflicts, not being able to see our true selves.” On behalf of those in attendance, Ven. Hongpa made a vow to live a life without discrimination by respecting others’ differences and a harmonious life by overcoming jealousy, discord and conflict. He also vowed to communicate with and understand others for a happy and peaceful world.

With the Buddhist declaration of wishes, Ven. Choon Kwang, the Executive Director of Administrations for the Cheontae Order of Korean Buddhism, reaffirmed the commitment to making a peaceful world without discrimination by following the teachings of the Buddha. Ven. Choon Kwang declared, “Buddhists in search of truth and enlightenment can become genuinely happy when they share wisdom and compassion in the sea of equality. Let us keep intact the light of lotus lanterns, which are as bright as the Buddha’s teachings, and make sure that no one is left behind in a world without discrimination by awakening to the truth that all living beings have Buddhahood.”

Condolence messages for the victims of the Sewol ferry disaster were delivered as well. The head of the Jingak Order, Hoeseong Jeongsa, offered his prayer, “I sincerely pray that 304 souls of the sunken ferry disaster could rest in the Pure Land and the bodies of the missing victims can be recovered and returned to their bereaved families.”

Meanwhile, having departed from Dongdaemun, the first group of the lantern parade arrived at Jogyesa around 7 pm. More than 100,000 multicolored giant lanterns and small-sized lanterns from each participating temple and group adorned the skies of Seoul.

While the procession was in its full swing, both Korean and international spectators enthusiastically welcomed those marching by with warm rounds of applause, relishing the festive moments together. The parade participants greeted the audience by waving their hands and raising their lanterns high.

Significantly, at this year’s lantern parade, children and families were seen holding giant lanterns designed in the shape of traditional Korean ornamental pouches, socks, and pagodas. The Yeon Deung Hoe Preservation Committee proudly presented the interesting lanterns held by participants, regardless of gender, age or nationality, to promote a sense of community as well as a commitment to a world without discrimination, in line with the theme of the 2017 Festival.

The newly-introduced “four instruments lanterns” in the shape of a Dharma bell, a Dharma drum and a cloud-shaped gong fascinated spectators. In addition, lanterns in various forms crafted by the members of participating temples, lay Buddhists’ associations, Buddhist groups and institutions were enough to create a picturesque scene of harmony. Some of the significant participants in the parade were international Buddhists with their symbolic lanterns in the form of the flags of their home countries, including the Thai and Taiwanese participants who rejoined the parade after several years. Character-themed lanterns in the shape of Ryan, one of the most popular Kakao Friends characters, were presented for the first time this year. The character-lanterns of Tayo the Little Bus and Larva were also well-received by children and their parents.

The darker the night got, the brighter the light emitted by the lanterns became. The lantern parade was indeed the magnificent Dharma Assembly of harmony and festivity. Every place the lanterns arrived was warmly greeted by viewers with rounds of applause and cheerful encouragement to those marching by. Two thousand international participants fully enjoyed traditional Korean culture by joining the parade. One hundred Yeon Deung Hoe global supporters taught spectators this year’s choreographs for the Lotus Lantern Festival, making the atmosphere of the festival even more cheerful.

Mr. Sehyeong Lee, 45, Seoul, who enjoyed the lantern parade with his wife and daughter, said with genuine enthusiasm, “I just saw the parade by chance while I was at Dongdaemun shopping with my family. It’s been already more than an hour since I started watching the fascinating waves of lanterns. My daughter loved Tayo the Little Bus and Larva-shaped lanterns so much – I will definitely come again to see the parade next year.”

Following the lantern parade, the post-parade celebration took place at the Jonggak intersection, centered on a special stage of performances in celebration of the Buddha’s coming to the world, bringing all spectators together for the festivities.

On the day following the parade, April 30, traditional cultural events were held from 12 pm to 7 pm on the street in front of Jogyesa. This provided visitors with a variety of options for experiencing Korean and international Buddhist traditions, culture at booths for young people, international Buddhist culture, food tasting, charity bazaar and NGOs.