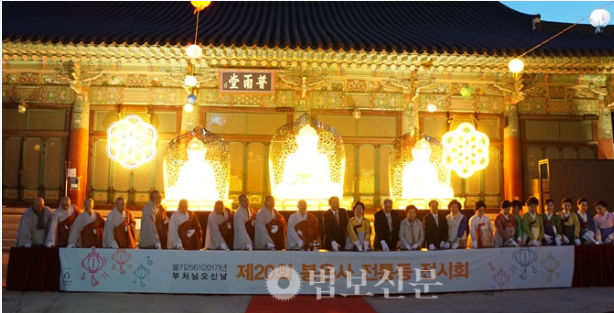 Marking the upcoming Buddha’s Birthday in the Buddhist Era 2561, a variety of multicolored lotus lanterns lit up Bongeunsa. The opening ceremony of the 20th Exhibition of Traditional Lanterns was held at the precinct of Bongeunsa on April 19.

The opening ceremony began with the Bongeunsa choir’s performance. 100 attendees, including the abbot of the temple Ven. Wonmyeong, monks and members of the temple’s lay Buddhists community, lit up lotus lanterns together. Following the opening ceremony, monks and lay Buddhists enjoyed giant lanterns and were reminded of the true meaning of lighting up lotus lanterns. Ven. Wonmyeong said, “The highlight of this year’s exhibition is the lantern in the shape of Wooden Seated Sakyamuni Buddha Triad (Treasure No. 1819) enshrined in the Great Hero Hall of Bongeunsa. I hope all attendees could light up the lantern of their mind and share the joy of the Buddha’s birthday with their neighbors.”

At the temple precinct, 50 giant lanterns depicting traditional Korean Buddhist culture, including the Wooden Seated Sakyamuni Buddha Triad lantern, were displayed. The entrance path from Jinyeomun (Gate of Truth) to Beopwangru (Buddha Residing Pavilion) was decorated with 11,000 multicolored lanterns. During the Buddha’s birthday celebration period, Bongeunsa will be lit up by approximately 20,000 lotus lanterns, allowing visitors to relish true meaning of the teachings of the Buddha.

With the Exhibition of Traditional Lanterns, a wide range of events for the Buddha’s birthday celebration are scheduled. On April 22, the 6th Lay Buddhist Ordination Ceremony for Infants will be held. The Ordination Ceremony has been established as one of the primary family events at Bongeunsa, enabling children aged 10 or younger to become familiar with Buddhism on the occasion of the Buddha’s birthday.

Buddha’s birthday celebration ceremony will be held at the Gangnam Police Station on April 25 and at the Seoul Medical Center on April 28, sharing the Buddha’s teachings and mercy with local residents, civil groups and institutions. Market for mutual growth between local producers and consumers in Seoul will also be held from 26 to 30 April at the temple precinct.

A noteworthy event for international visitors is the “Special Event at Bongeunsa for International Guests”, scheduled in the afternoon on the same day of the giant lantern procession of the Lotus Lantern Festival, which was designated as intangible cultural property. 100 international guests will be provided with the opportunities to have a hands-on experience of traditional Korean music and Buddhist culture. The Special Event showcases broadened scope of the Lotus Lantern Festival as a traditional cultural celebration, going beyond a religious event.