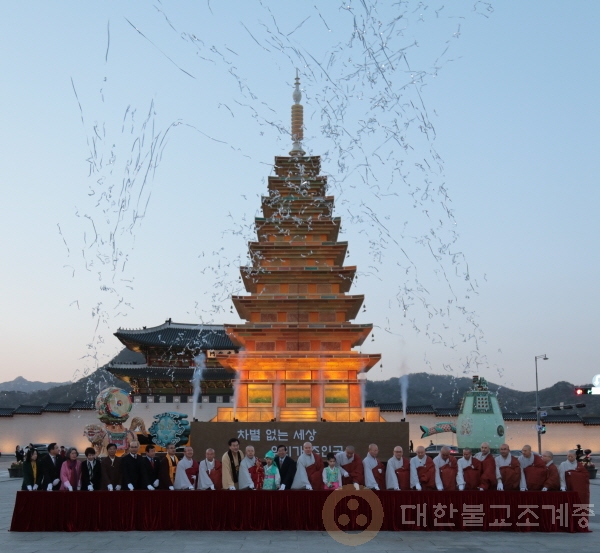 The Yeondeunghoe Preservation Committee held the Lantern Lighting Ceremony for the upcoming Buddha’s Birthday in the Buddhist Era 2561 at Gwanghwamun, Seoul, at 7 pm on April 12. It is noteworthy that this year the ceremony focused on aspiration for harmony among citizens and social integration, in line with the slogan of the Lotus Lantern Festival, “We Can Make a World without Discrimination”.


The ceremony began with a moment of silence to remember the victims of the sunken Sewol ferry. Yellow ribbon-shaped lanterns were lighted at Gwanghwamun, allowing participants to be reminded of the true meaning of the Buddha’s birthday with sincere aspiration for alleviating and healing pain of the world and achieving harmony in society.

Ven. Jaseung said, “It is natural that our life achieves mutual growth as we gather together, rely on each other and feel grateful to others. Let us light up the journey ahead of us with clear mind attained by self-reflection. Please renew your mindset with spiritual practice for peaceful daily life by shaking up anxiety and concerns that we were recently forced to have due to unprecedented political scandal. Right view of our mind and wisdom for harmonious society will let our mind be filled with happiness and tranquil joy.”


Ven. Jaseung also highlighted that we should come together to heal the pain of the Sewol ferry disaster. The President of the Jogye Order said, “I hope that the wave of candles which filled the Square by the public can lead us to the Prajna ship toward the Pure Land with the light of wisdom. I sincerely pray that the pain of all victims is alleviated and a disaster like this will never happen again by being reminded of the dignity of life. I hope we can join forces to make our society even more mature with merits attained from spiritual practice.”


At the end of the ceremony, Buddhist monks and lay Buddhists circumambulated the lantern monument adorned with bright light at Gwanghwamun, while reciting Sakyamuni Buddha’s name.


This year’s lantern monument was inspired by the Stone pagoda of Mireuksa, Iksan, recognized as one of the masterpieces of Korean stone pagodas. The lantern is going to light up Gwanghwamun by May 3, Buddha’s birthday.