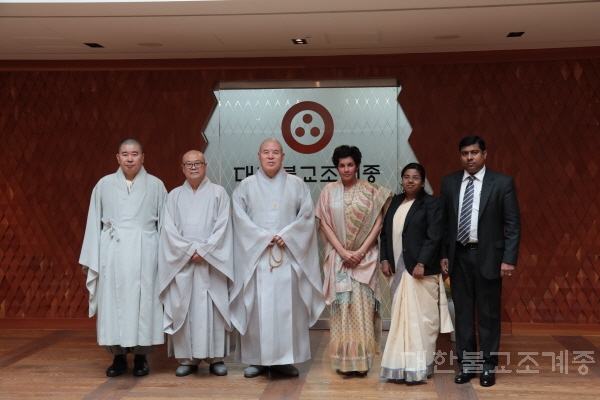 Ven. Jaseung, the President of the Jogye Order, met with Ambassador Manisha Gunasekera on March 20 at the meeting room on the 4th floor of the Center for Korean Buddhist History and Culture. Marking the 40th anniversary of the diplomatic ties establishment between the Republic of Korea and Sri Lanka this year, the Jogye Order of Korean Buddhism and Sri Lankan government agreed to join forces to further strengthen friendly relations between the two countries through Buddhist cultural exchange.

Ambassador Gunasekera said, “It would be a great honor to welcome Ven. Jaseung as a special guest to the 14th United Nations Day of Vesak which is held in Sri Lanka this year,” and forwarded the official invitation from the Minister of Justice and Buddhasasana of Sri Lanka and President of the International Council for the Day of Vesak to the International Celebration of the 14th UN Day of Vesak 2017. Ven. Jaseung said he would positively review the proposal considering the Order’s schedule.

While the Buddha’s Birthday is celebrated on the eighth day of the fourth month in the lunar calendar in Korea, Theravada countries in Southeast Asia, such as Sri Lanka and Myanmar, celebrate the biggest Buddhist holiday on the full moon day of Vesakha, designated at the General Conference of the World Fellowship of Buddhists in 1998. The Sacred Day of Vesak was officially recognized as a day of observance by the United Nations at its 54th General Assembly held in 1999, with the United Nations Headquarters and offices internationally observing the Day of Vesak and holding commemorative events every year.

The Sri Lankan Ambassador added, “I extend my sincere gratitude to you and the Jogye Order for several projects which the Order took initiatives in Sri Lanka. Marking the 40th anniversary of the diplomatic ties establishment between our two countries, I intend to put priority on Korean-Sri Lankan Buddhist relations to further enhance bilateral friendship.”

Cordially inviting the Ambassador to the Inauguration Ceremony of the 14th Supreme Patriarch of the Jogye Order of Korean Buddhism Jinje and Buddha’s Birthday Celebration Ceremony, Ven. Jaseung expressed his commitment to working together with the Sri Lankan Embassy for Buddhism and cultural advancement of the two countries.