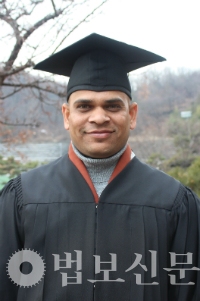 “The best decision in my life was to be a Buddhist monk and I still think so.” Ven. Jajae, the first international valedictorian of the College of Buddhist Studies of Dongguk University, said without hesitation on February 16 when the commencement ceremony was held at Jeonggakwon. Even amid continuous compliments and interview requests, Ven. Jajae didn’t seem to put too much significance to the word, “valedictorian”. Instead, he reaffirmed his commitment to letting teachings of the Buddha more widely known.

He didn’t know much about Korea except for the fact that it is a faraway country until his arrival in August 2011. In addition, Ven. Jajae was an enthusiastic Hindu, strongly influenced by his parents. With ever growing faith in Hinduism, he joined the Gayatri Pariwar, an international Hindu community which has regional centers in 160 countries around the world, after his graduation from the high school. Following the 3-year mantra practice at the community, he devoted himself to propagation of Hinduism for about a year in Delhi.

However, he recognized that he was pushing himself too hard to extremes through Hindu asceticism and began to look around in search of the middle way, while he studied English Education at the Tribhuvan University of Nepal and taught at high schools. One day, he gave a lecture about co-dependence to his students and felt confident that solutions to the questions he had in mind could be found from Buddhism. At that time, Ven. Jajae didn’t even know that there are Buddhist Orders in Nepal. Then, a Korean friend from his yoga class came to his mind. The friend introduced Munbinjeongsa in Gwangju and Ven. Jajae embarked on his journey right away on August 15, 2011.

“As a matter of fact, I didn’t think I would get ordained in the first place. However, becoming a Buddhist monk also meant having a closer look at Buddhism, which I so enthusiastically want to know about, and engaging in spiritual experience thoroughly. Then, everything became clear. I was ordained at Jikjisa in February 2012, after the 6-month training at Hwagyesa,” Ven. Jajae said.

He entered the College of Buddhist Studies of Dongguk University in 2013 after completing Korean courses at the Korean Language Institute of the University. The Jogye Order provided him with financial support, 70% of the tuition, and the rest of the tuition and living costs were covered by Munbinjeongsa and Ven. Beopseon, the abbot of the temple. Ven. Jajae’s school life was all about taking classes and studying at the library and dormitory, however, he cherished every moment of lectures and the time he spent with his classmates. With unparalleled concentration on every class, finally, he came to be honored as the first-ever international valedictorian of the College of Buddhist Studies.

Ven. Jajae plans to study anthropology at the graduate school of Seoul National University from this spring semester, aiming to broaden the scope of Buddhism in society. “What’s important is making sure that society needs Buddhism and Buddhist teachings can make people’s lives happier. To this end, the principle of co-dependence, quintessence of Buddhism, should be more widely known. With the truth of co-dependence being incorporated into our daily lives, Buddhism will naturally part of our society,” Ven. Jajae highlighted his commitment to Dharma propagation.

Though he carried on a challenging life in Korea, now both Nepal and Korea have become one Buddha land where he hope to work hard for further Dharma propagation. That is why Ven. Jajae takes an approach to Korean Buddhists as one of the disciples of the Buddha, not as a foreigner from Nepal. Sharing his vision for Dharma propagation through ideal life as a practitioner with glittering eyes, Ven. Jajae is about to start his new journey.