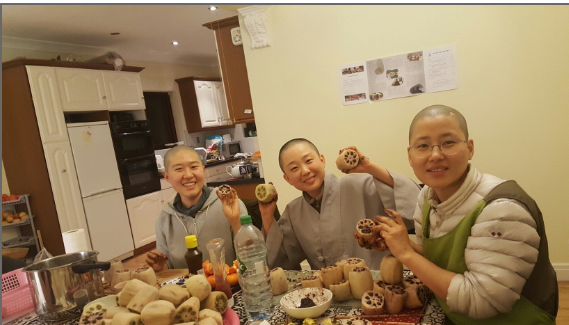 Three Korean Buddhist nuns embarked on a journey for Dharma propagation in a faraway country. Ven. Jayoon and Ven. Beopjeon, graduates of the International School of Buddhist Studies, and Ven. Jongseong, who earned her Master’s degree majoring in Indian philosophy at Dongguk University, recently opened the Lotusmind Temple in London. The first Dharma assembly at the temple will be provided from February 12.

International participants in Templestay programs of Korea who frequently asked about Korean Buddhist temples in overseas countries prompted then-Templestay Dharma instructor Ven. Jayoon to decide to work on Dharma propagation at the heart of the U.K. While traveling Europe as a backpacker two years ago, Ven. Jongseong saw many westerners who had huge interest in Buddhism but felt regrettable because much of their interest was limited to Tibetan or Theravada Buddhism. Doing her Master’s degree at Kingston University as a scholarship recipient of the Jogye Order, Ven. Beopjeon made up her mind to work on both study and Dharma propagation as she was often stopped by foreigners curious about Buddhism walking on the street.

Coming together with solid commitment to letting the world know more about Korean Buddhism, the three Bhikkhunis rented a house in London and named it as the Lotusmind Temple. 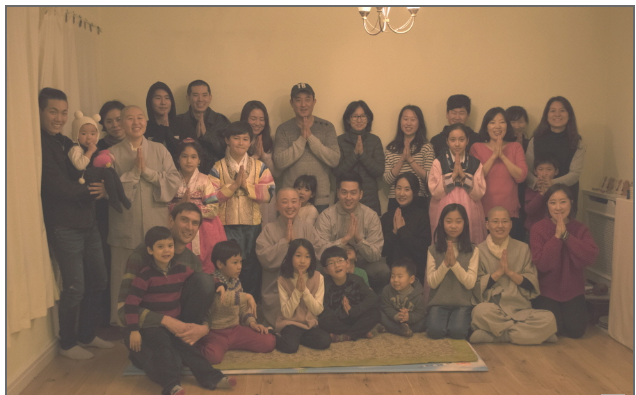 Most of visitors to the temple are Koreans, however, people with a variety of nationalities, too, frequent the temple where diverse programs are offered. Ven. Jayoon teaches 108 prostrations and Korean temple food, while Ven. Jongseong provides yoga and tea ceremony classes. Ven. Beopjeon is in charge of Buddhist arts, meditation and Dharma classes for children. Marking Seollal, Lunar New Year, the Buddhist nuns and visitors immersed themselves in a festive and family-like atmosphere of the Korean holiday by making Korean dumplings with children in Hanbok, traditional Korean dress.

Even with their high ambition, however, it is not easy to run a temple in London, a city with notoriously high cost of living. Candlesticks, incense burners, Buddhist altars and cushions for prostrations, easily found around Jogyesa in Korea, are not affordable at all in the U.K. Despite the unfavorable circumstances, the Bhikkhunis did not give up their aspiration for Dharma propagation. They made cushions for 108 prostrations with recycled Styrofoam, an incense burner with clay and a Buddhist altar with MDF panels on their own. You cannot hear their struggling stories without tears ̶ they had to carry wood panels and chunks of clay on a cold rainy day by bus.

Living in London during wintertime without ondol, Korean underfloor heating system, is all about fighting cold. Worried about high gas and electricity bills, the three Buddhist nuns don’t use the heater that much and constantly cough. However, they feel encouraged and driven thanks to their fellow monastics who sent windbreak tents and lay Buddhists of the temple who make donations.

Opening a temple in London was an indeed audacious attempt, however, further assistance is highly needed for sustainable operation of the Lotusmind. The Buddhist nuns might have to move to a smaller place in two months due to high rent. On top of that, Ven. Beopjeon is still a student, while Ven. Jayoon and Ven. Jongseong have to go back and forth between Seoul and London due to difficult processes in obtaining religious worker visas. However, they refuse to leave with the unyielding dedication to enhancing Londoners’ understanding about Korean Buddhism.

The three Buddhist nuns expressed their ambition, “more and more Europeans are showing interest in Buddhism through philosophy and meditation, however, still there lacks in-depth understanding about Korean Buddhism. We will do our best to let more Europeans know about Korean Buddhism with a variety of fascinating cultural heritage and potentials gradually like the delicate scent of lotus flowers”.

For more information about the Lotusmind Temple, please visit the following website or blog and send an email.