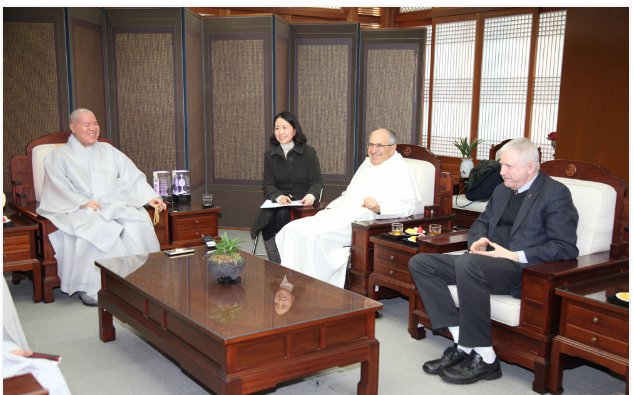 č, O.P., the Dean of the Faculty of Theology and Rev. Michael Puss of the Pontifical University of Saint Thomas Aquinas, also known as the Angelicum, Professor Lee Jaesook of the Pontifical Gregorian University met with Ven. Jaseung, the President of the Jogye Order of Korean Buddhism, and discussed interreligious understanding and peace.

Ven. Jaseung said, “it is highly meaningful that Dongguk University founded in 1906 and the Angelicum which has more than 800 year-long history took their first step for academic exchange. With interreligious conflicts being global conundrum, interfaith dialogues between Buddhist and Catholic communities like today could be regarded as an effort that can contribute to the world peace. It is my sincere hope that your understanding about Korean Buddhism could be further enhanced through Templestay during your visit”.

Agreeing with Ven. Jaseung, Rev. P. Stipe Jurič, O.P. said, “academic exchange between our two universities holds significance not only as interreligious communication but also as cultural exchange between the two countries. I look forward to seeing this partnership serve as an opportunity to strengthen mutual understanding between the Korean Buddhist and Catholic communities and the East and the West”. Recalling graceful feelings when he received a miniature Korean temple bell on the occasion of his visit to Dongguk University 10 years ago, Rev. Michael Puss expressed his hope, “a unified voice of the religious communities will be able to offer wise solutions to a wide range of global issues”.

The delegates from the Angelicum will attend the signing ceremony of the MOU on interfaith communication and exchange at the Lotus Hall of the main building of the Jogye Order-affiliated Dongguk University on February 7. Founded in 1222, the Pontifical University of Saint Thomas Aquinas is an academy that has nurtured leaders in the Catholic communities, including Pope Saint John Paul II, and has approximately 1,200 students from all over the world as of now. The MOU is expected to enable lectures on interreligious dialogues to be offered and faculty members and researchers of the Dongguk Buddhist University and the Faculty of Theology of the Angelicum to actively engage in mutual academic exchange.

A special lecture on Asian religions for Buddhist monks of the Seoklimhoe Association and professors of the faculty of Buddhist studies of Dongguk University will also be given by Rev. Michael Puss. He studied Pali and Sanskrit in Sri Lanka and earned his doctoral degree with a dissertation on the Lotus Sutra and Catholic theology, and now teaches at the Angelicum, while continuing his research on comparative religion.

The delegates from Rome will visit the Dongguk University campus in Gyeongju, Bulguksa and Seokguram after joining the Templestay program at Haeinsa from February 8 to 9.