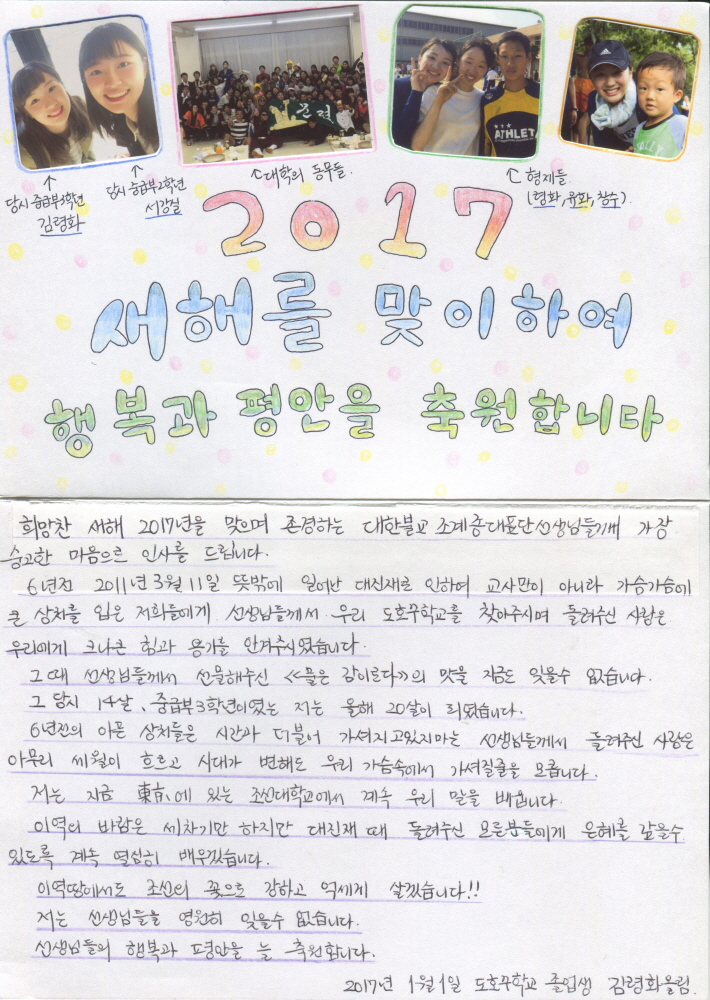 A Handwritten Thank You Letter to the Jogye Order from Japan

Kim Ryunghwa, one of the survivors of the 2011 Tohoku earthquake and tsunami, sent a handwritten letter to the Jogye Order. In her letter, she wrote, “your support brought us strength and courage when we were devastated due to the unprecedented earthquake six years ago. Marking the New Year, I extend my sincere gratitude with the most sacred heart to the delegates of the Jogye Order”. <?xml:namespace prefix = o />

She also wrote, “I am 20 years old now but still remember the taste of the bottled water named ‘the water is nectar’ graciously provided by the Order when I was 14 and the support that the delegates of the Jogye Order showered upon us is unforgettable even after all those years. I am learning Korean at Korea University in Tokyo to return the favor one day”.

Ven. Jeongmun, Director of the Department of Social Affairs of the Jogye Order, welcomed the heartfelt letter from Japan, reaffirming the Order’s commitment to providing aid to the most needed.

Tohoku Korean Primary and Junior High School, located in the suburban area of Sendai City, Japan, is an ethnic Korean school operated by the General Association of Korean Residents (Chongryun) in Japan. It was on the brink of collapse due to the 8.0 magnitude earthquake in March 2011, however, could not receive aid from the governments of Japan and the Republic of Korea and Korean consulates, because it was not an officially authorized school and run by the Chongryun. The Jogye Order visited the school and donated JPY 4 million, while also offering 20,000 bottles of water after the earthquake.