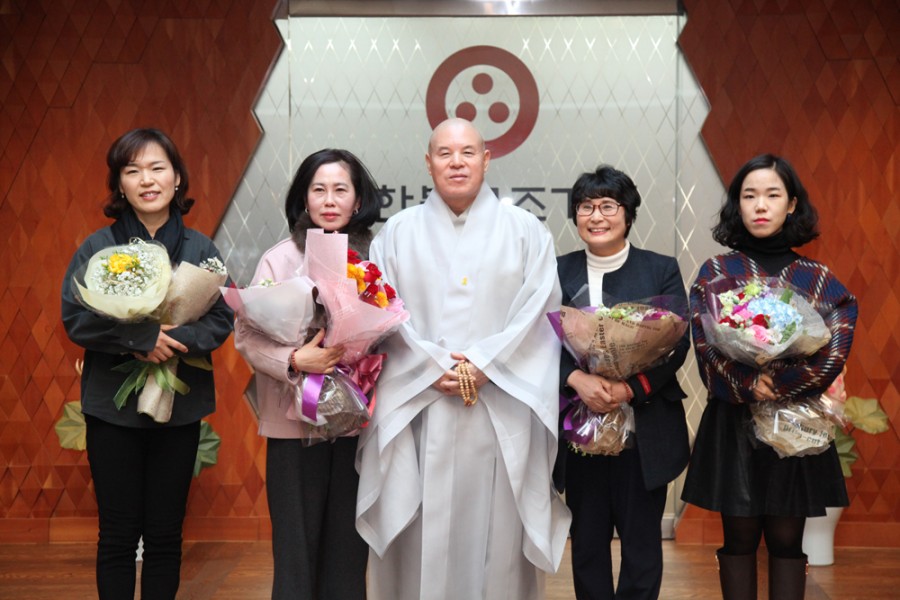 The awards ceremony of the 2017 Buddhist Newspaper’s Annual Literary Competition, well-known for its long history and traditions, was held at the meeting room of the Center for Korean Buddhist History and Culture on January 23. Marking the 31st anniversary this year, the competition has served as a birthplace of Korean Buddhist literature and produced up and coming writers, offering higher prize money than many similar competitions.

Ven. Jaseung, the President of the Jogye Order of Korean Buddhism and publisher of the Buddhist Newspaper, bestowed the awards and prize money (KRW 5 million for the novella winner and KRW 3 million for the others) on this year’s winners of each genre, Lee Seonjae (novella), Jeon Eunsook (children’s story), Kim Seongshin (contemporary/ traditional poem) and Kim Kiyoung (review).

The awardees expressed their gratitude and shared their future plans at the ceremony. “I was very fortunate to win this competition and it is such a privilege that I meet with the President of the Jogye Order”, said Lee Seonjae. Jeon Eunsook shared her future goal, “I want to keep writing stories that can be helpful for children, of course including my kids, in the future”. “I am enjoying the second round of my life thanks to the winning of the competition, so I want to return the favor by producing good works”, Kim Seongshin said. Kim Kiyoung attributed her success to the fact that she strived to identify herself with protagonists of Buddhist works.

Delivering his congratulatory remarks, Ven. Jaseung said, “I wholeheartedly congratulate all of you on receiving the awards of the writing competition hosted by the Buddhist Newspaper, which has contributed to the promotion of Buddhist literature. I would like to ask all of you to continuously work hard to provide us with inspiring works in the future as well”.

The judging committee, participated by the poet Go Eun, novelist Han Seung-won and professor Bang Minho of Seoul National University, selected The Rotating Sutra-case (poem) by Kim Seongshin, Under the Mountain Cherry Blossom Tree (novella) by Lee Seonjae and The Gift from My Grandfather (children’s story) by Jeon Eunsook as winning entries. Kim Kiyoung had the honor of being the first winner of the review genre since 2012, with her entry titled The Star of the Desert – On Dunhuang’s Love by Yoon Humyeong.

The awards ceremony was highlighted by the attendance of Ven. Jeong-hyun, the Director of the Department of Cultural Affairs of the Jogye Order, Editor-in-chief Park Kiryun and Managing editor Kim Hayoung of the Buddhist Newspaper and the family members of the winners.