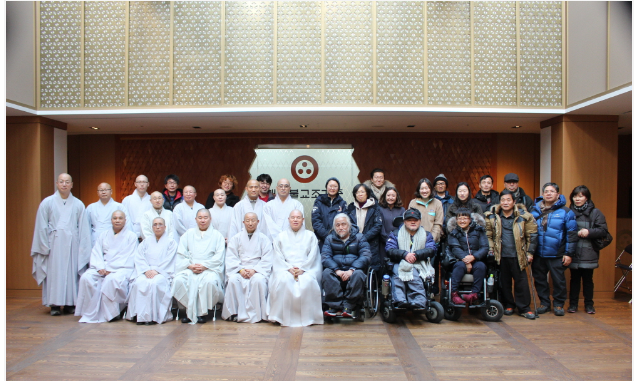 “Let Us Create a World without Poverty Together”

Declaring its commitment to realizing an equal world without discrimination, the Jogye Order of Korean Buddhism kicked off the New Year by embracing the underprivileged.

The “Headquarters of the Jogye Order’s Affiliated Organizations for Far-sighted Plans” held the signing ceremony of the “One Temple One Activist Organization Donation Partnership for Poverty Alleviation” at the Center for Korean Buddhist History and Culture on January 16. Under this partnership, 22 temples, Buddhist organizations and monks, including Geumjeongsa in Gimpo and Dreaminus, the Jogye Order’s fundraising organization, will make a monthly donation worth KRW 10,000 to KRW 100,000 to 14 non-profit organizations helping the disabled and homeless until November 2018.

This is in line with the Jogye Order’s continuous effort to help the vulnerable suffering from poverty and discrimination. The Resolution for Introspection and Reform Committee, now affiliated to the newly established Far-sighted Plans Headquarters, has been at the forefront of facilitating donation to activist organizations by pairing up 12 temples with 12 nonprofits since the Great Equal Assembly for Poverty Alleviation participated by ordinary citizens in September 2014. Under the Committee’s donation scheme, 12 organizations for the socially vulnerable groups, including the Nodeul Night School for the Disabled and Korean People’s Solidarity against Poverty, received monthly donation worth KRW 100,000.

Ven. Ilgam, the Secretary General of the Far-sighted Plans Headquarters, said, “the Jogye Order intends to lay the groundwork for poverty alleviation by prompting members of the Buddhist communities to take part in donation with continued interest in helping the vulnerable. This second round of donation partnership project was made possible thanks to the commitment of the temples which participated in the previous charity program”.

Park Kyung-seok, president and founder of the Solidarity Against Disability Discrimination which has received donation by Dreaminus since 2014, expressed his deep gratitude to Ven. Jaseung, the President of the Jogye Order. Mr. Park said, “it is very encouraging to see that monks lend a hand to organizations like ours in a challenging situation where quite a number of activist organizations were forced to be shut down due to financial distress. More than anything, I am truly grateful to the donors for not only providing us with financial support on a regular basis, but also allowing us to feel that there is still hope in society with these generous monks dedicated to helping us”.

Ven. Jaseung delivered words of encouragement to all participants, underscoring the Order’s commitment to making continuous effort for an equal and fair society without discrimination through donation and a variety of means.