Ven. Jaseung, President, paid his respect to the deceased
Han Yang-won,
chairman of the Association for Korean Native Religion 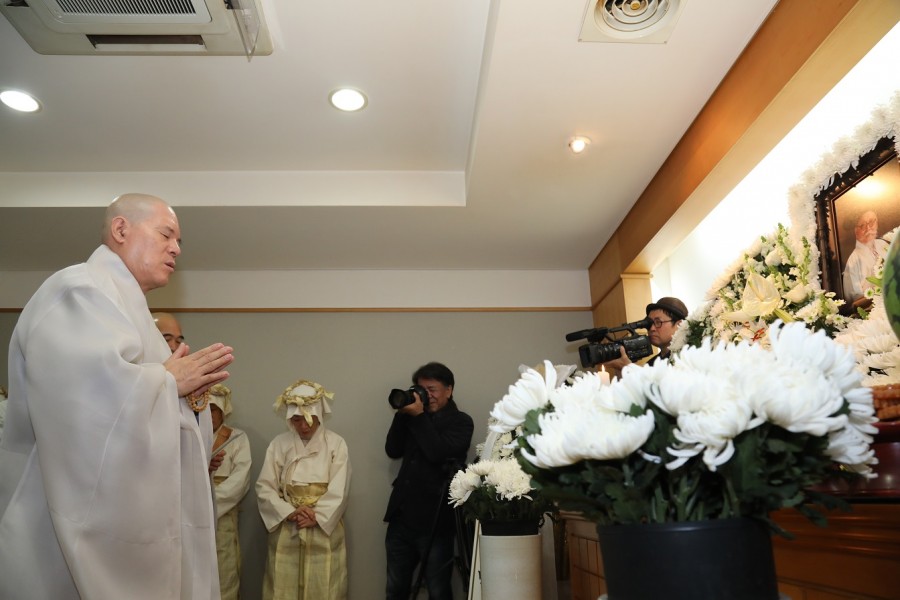 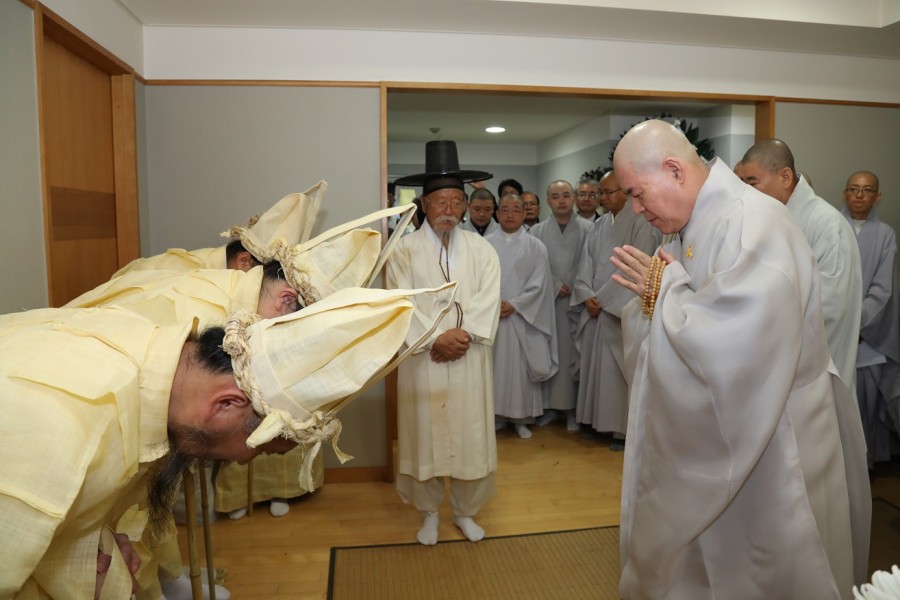 Ven. Jaseung, President of Jogye Order, paid his respect to the deceased Han Yang-won, chairman of the Association for Korean Native Religion, on 13th November at his funeral home in Suncheonhyang University Hospital, Seoul.

Han Yang-won passed away on 11th November 2016 at the age of 94. The Association for Korean Native Religion was established in 1991 by 33 orders of Korean native religions such as Won Buddhism, Cheondogyo, Daejonggyo, and Gyaengjung-yudo, etc., in order to keep the national traditions and spirit, raise public awareness, and retrieve the status of native religions in the current modern society. Han Yang-won was the leader of this Association and has led it for the past 30 years. He had said when he was asked about the motivation to establish this organization, “It was the Korean native religions which were in the forefront of independence movement during the Japanese colonial regime. It was Cheondogyo which initiated 1919 March first Independent movement, and it was Daejonggyo which made the biggest contribution to the Provisional Government of Korea in Shanghai, China. It was the native religions which established 11 schools in North Manchuria, to foster and train the Korean national army for independence. But because of these resistance movements, Japanese army in Korea had utterly despised us as false or pseudo-religion and this false notion is still lingering nationwide unfortunately as the vestiage of Japanese imperialism in Korea. When we tried to build a shrine for Dangun, the legendary founding father of Korea, in Sajikdan Park (Altar to the State Deities), we could not due to the fierce objection from some Christian groups. This incident made the leaders of native religions all united and felt the necessity to form a group."

Han had always worn gat (Korean traditional hat made of bamboo and horsehair) on the head and hanbok (Korean traditional clothes) throughout his entire life. Thus he looked a bit particular and outdated, nevertheless he was always dignified, confident, humorous, and attentive more than anyone else. He had the sense of balance, free spirit and liberal mind in thinking. This made him to be much respected in the meetings of religious leaders, to lead the meeting, and to be liked by many former Korean presidents, who got advice from him.

Ven. Jaseung made his speech in his funeral home, “We deeply respect your devotion and moral influence as a religious leader. Your life example will shine as light of wisdom to us and to the later generations. Your call to recover upright moral character for the bright  society based on wisdom and to act now together, not just wait for tomorrow to come, is such a precious teaching that we all should keep in mind. Your life-long endeavors to keep the national spirit and to lead the country to prosperous future through reunification by bringing altogether and harmonizing old and new, tradition and modern will now be at repose in a peaceful and blissful place. We are all deeply indebted by you and remember you long.”

Han Yangwon also served as the co-representative of Korean Conference of Religions for Peace, Chairman of Koreaness Awakening Movement Union and Chairman of Korea Advanced Association for Traditional Culture in Seo-Dang, to list a few.