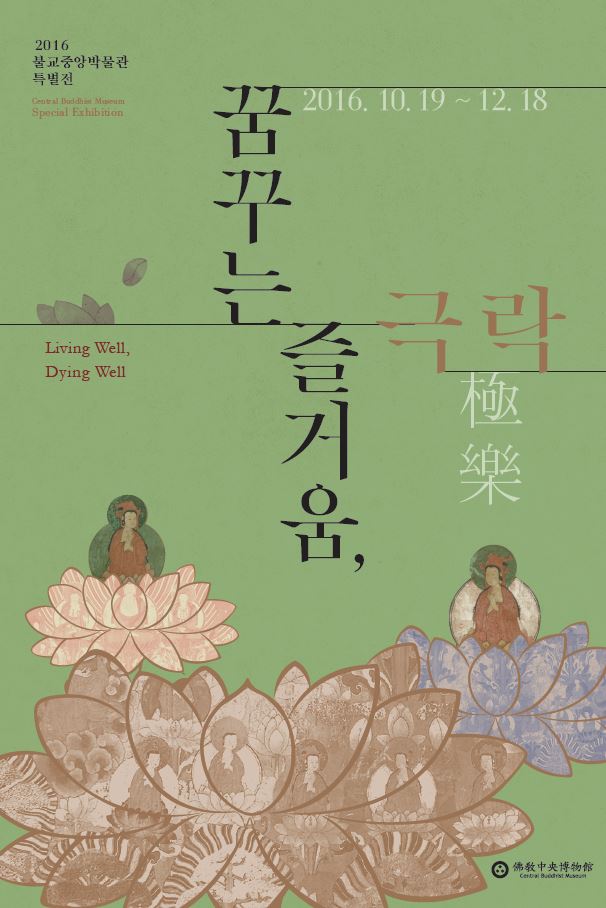 ‘The World of Utmost Joy Without Suffering, Pure Land’

The Central Buddhist Museum (Director, Ven. Hyunjo) holds the 2016 exhibition titled, ‘The World of Utmost Joy Without Suffering, Pure Land’ under the theme of the Amitabha Buddha and the Pure Land from Tuesday, 18 October to Sunday 18 December for two months. The exhibition hopes to console the distress and anxiety of the general public and deliver a message of hope by exhibiting various forms of Amitabha Buddha, also known as the Buddha of Infinite Life, who guides us to lead a happy life and receive a death happily.

With the development of the Pure Land Buddhism that focuses on Amitabha Buddha, the Korean Buddhist arts were developed in a way to produce various forms of the Amitabha Buddha and the Pure Land. In this exhibition, around 100 Buddhist holy relics will be on display under the following five different subjects including one of the National Treasures, Wooden Seated Amitabha Buddha and Excavated Relics enshrined in the Main Hall of Paradise in Heukseoksa Temple in Yeongju City, and the Portable Shrine of Guilt-bronze Buddhas and Gilt-bronze Seven Buddhas Excavated from the Seven-story Stone Pagoda of Simgoksa Temple in Iksan City.

Theme (1) Amitabha Buddha, who resides in the Ultimate Bliss of Pure Land

The Amitabha Buddha is who resides in the Western Paradise and saves sentient beings there by giving the discourse on Dharma to them. The word, “Amitabha” is the transliteration of the Sanskrit words, “Amitābha,” and “Amitāyus,” and he is also known as “the Buddha of Infinite Life” and “the Buddha of Infinite Light.” This means that the Buddha removes all the obstacles by shining the infinite light to all corners of the world and that the life of those in the Pure Land is infinite. It can also be understood that the Amitabha Buddha is the infinite Buddha beyond time and space. The main sutras of the Pure Land Buddhism are "Amitabha Sutra," "Infinite Life Sutra," and "Amitayurdhayana Sutra." Based on these teachings, the faith has developed along the time in a unique way possessing a bit of difference per century and thereby produced various forms of holy relics on Amitabha Buddhas throughout the Korean history. 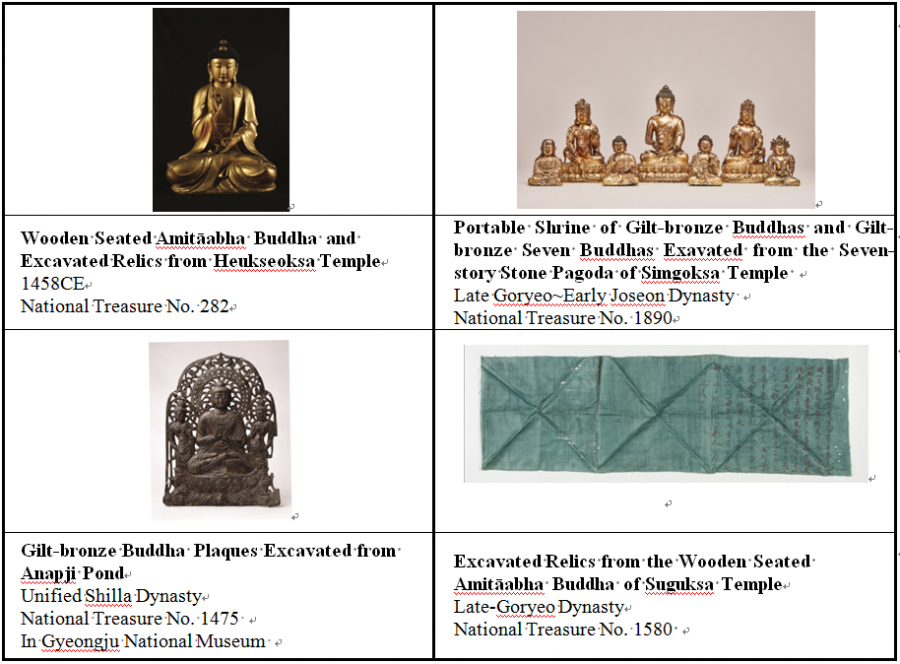 Theme (2)
The World of Utmost Joy Without Suffering, Pure Land

The Pure Land is also called as the Ultimate Bliss of Pure Land, the Land of Comfort, the Land of Peace, and the Pure Land in the West. These names refer that it is the world of true happiness and comfort without a single physical and psychological suffering or distress. While a good number of sutras describe the scene of the Pure Land, the Amitabha Sutra, the main text, has the most detailed description on this world. According to it, the Land is found after passing the 10 billion Buddha Lands westwards and it is where everyone enjoys the ultimate happiness without knowing suffering. The Amitabha Buddha blesses you to have a long life and to invite you to his Pure Land of Bliss after death. As it satisfies the most basic human aspiration, the faith on the Amitabha Buddha has been passed down from the Unified Shilla Period till today and so far produced a great deal of Buddhist arts on this theme. 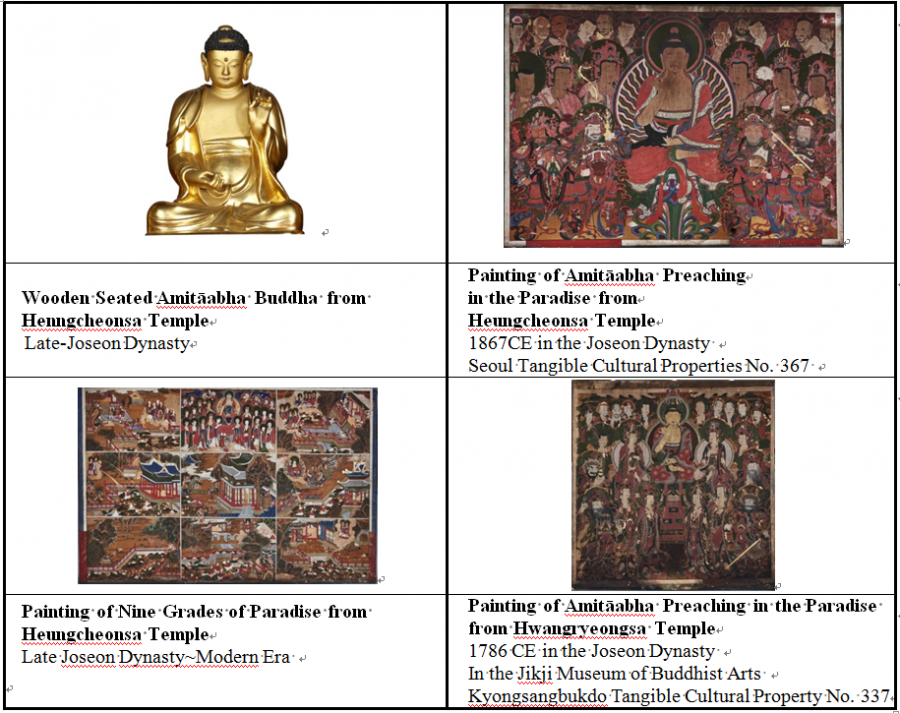 Theme (3) The Nine Grades of the Pure Land

The late-Joseon’s painting of the Nine Grades of the Pure Land depicted the Triad-Amitabha Buddhas, nine stages of ponds and blooming lotus flowers in such a beautiful way. This splendid, graceful and gorgeous painting on the Pure Land reached the general public very easily. 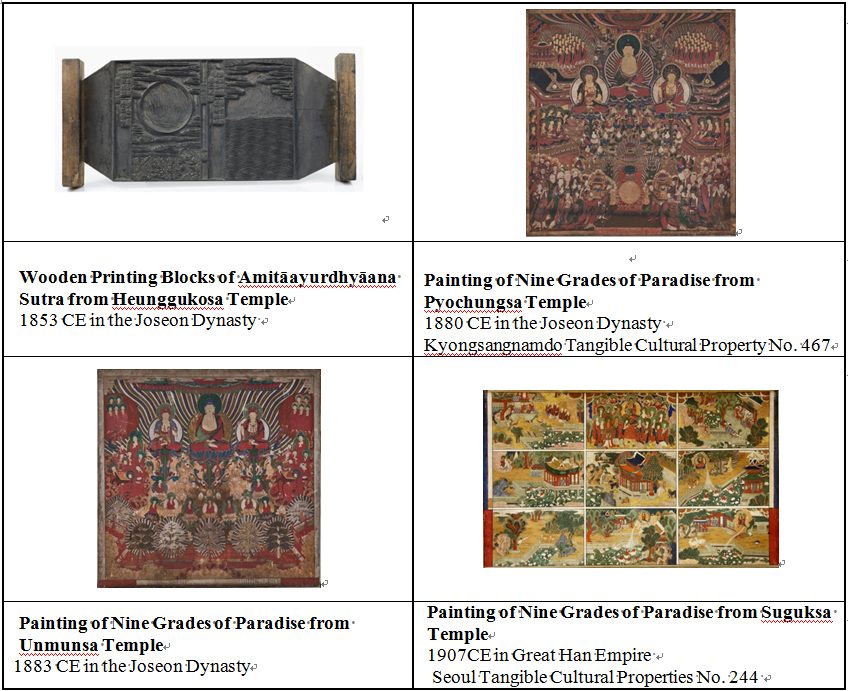 Theme (4), Aspiration for the Blissful Rebirth in the Pure Land

Historically, the biggest wish of people is the comfort in this life and the peace in the afterlife. The fear and dreadfulness towards the death and the afterlife was manifested into the dear wish for the blissful rebirth in the Pure Land. People made a donation to build and establish Buddhist treasures like temple, relics, sutras, and paintings, etc., in order to accumulate the merits and to make a wish. Their wishes are handed down until today in the message written on Buddhist paintings and the majority of them are related to the rebirth in the Pure Land. It is taught that if one can repeatedly recite the phrase, “Namo Amitabha Buddha (I take refuge in the Amitabha Buddha),” one can get away from the reality full of hardship and frustration and be reborn blissfully in the Pure Land after death. Therefore, chanting practice, which is reciting the Amitabha Buddha through words and thoughts continuously, was main practice of the Pure Land Buddhism in Korea. From the Shilla Dynasty, chanting practice in Dharma ceremonies was widely practiced, and during the Joseon Dynasty, a Chanting Hall was separately built in temples. 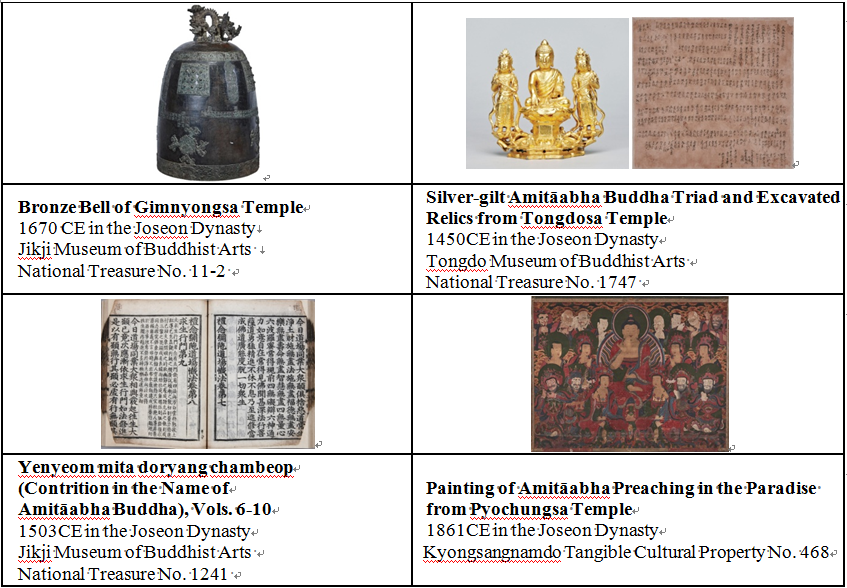 Theme (5) Leading to the Path to the Pure Land

It is the teaching that if one conducts good deeds and thereby accumulates the merits, and focuses on chanting practice, at the last gasp, one can be guided to the Pure Land by the Amitabha Buddha. One then takes a boat led by dragons to reach the Pure Land. It is well depicted in the Buddhist painting, “16 observation practices that let you reach to the Pure Land” and there is another painting, “Dragon Boat of Prajna (Wisdom)” or “Led by Dragon Boat” that depicted only this part of taking a boat led by dragons. The paintings of dragon boats are particularly found inside and outside walls of the temples built during the late-Joseon Dynasty. In the Buddhist painting called “Gamno (translation: nectar, meaning that the Buddha’s teaching is as precious and life-saving as the heavenly nectar of immortality),” one is led to the Pure Land after the death and welcomed by the Avalokiteshvara Bodhisattva, Ksitigarbha Bodhisattva and a few more. 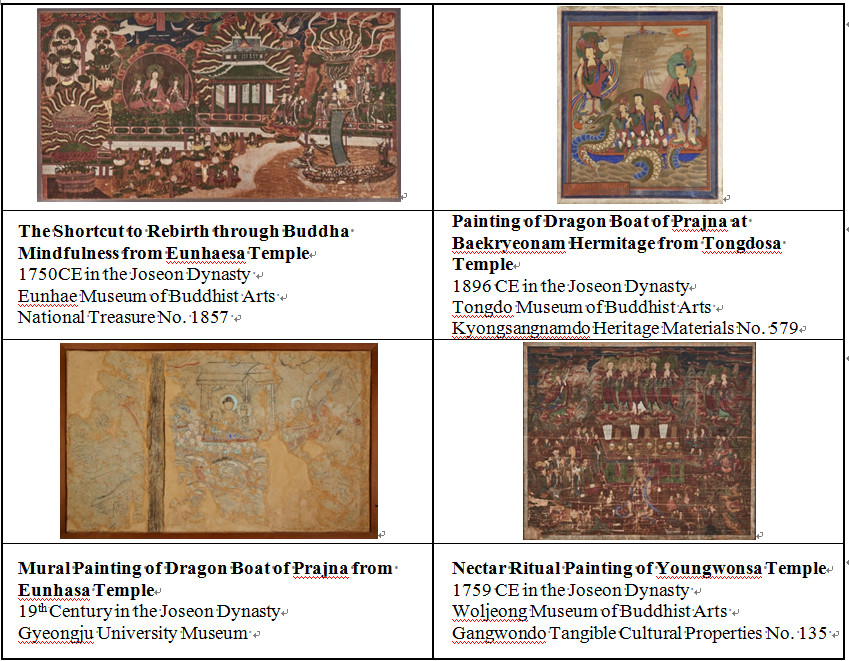