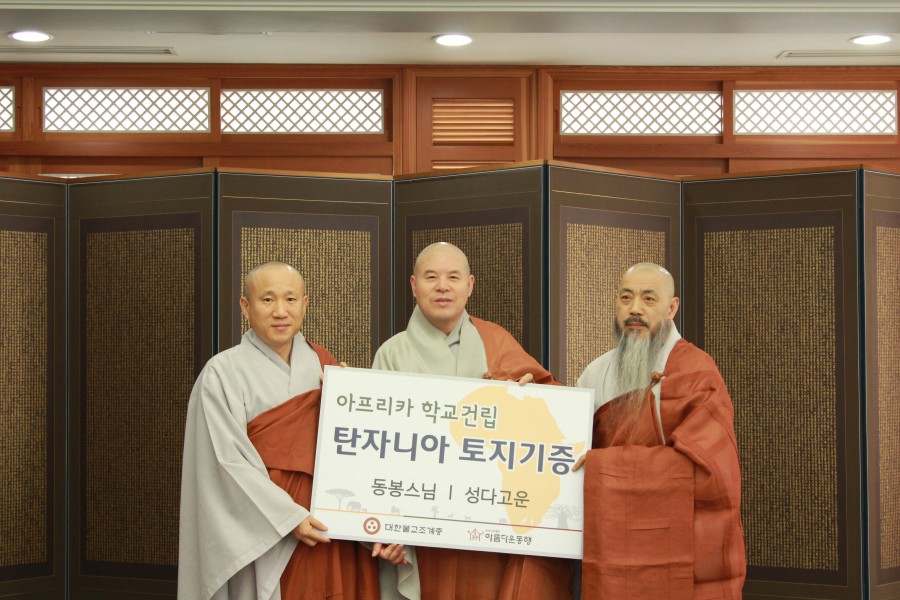 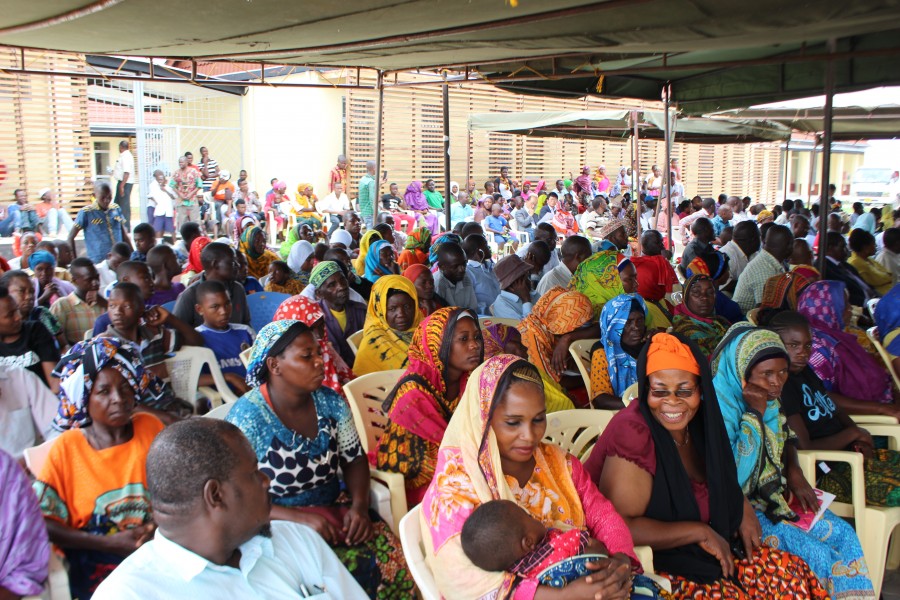 Karibu! (Welcome!) The Buddha who visited Tanzania for the first time

"The Day when Borigaram Agriculture Technical College Opened Up”

Mwasonga Village, located remotely from Dar es Salaam, the largest city of Tanzania, taking 3 hours by car. (It takes about 3 hours to arrive there by car from the city.)

When the delegates of the Jogye Order of Korean Buddhism arrived, the local villagers greeted them with the word, “Karibu!” meaning Welcome!

It’s a historical event for Tanzania as well as the village itself that a group of Buddhist monks paid a visit to this place whose population belongs to Muslim and Catholicism for the most part. The delegates flew for about 20 hours from the other side of the Earth, Seoul, to reach Mwasonga village to attend the opening ceremony of the Borigaram Agricultural Technical College that the Jogye Order has supported its establishment. The faces of the students, teachers and local villagers who attended the ceremony were full of joy, happiness and thrill for the future.

Thus, these foreign strangers could be a lot welcomed by the villagers, who recited “borigaram, borigaram” throughout the ceremony not to forget the new name. Malowi, a villager, said with a big smile, “I understand what borigaram means, although I do not know Buddhism. Doesn’t it mean that one could change one’s life if one acquires wisdom? It would also mean that Tanzania could become a developed country one day just like Korea if we people study hard, despite our unfortunate 50 years under the colonial regime in the past.”

Those who have been the most eager for the opening of the school were the students. Aurelia Mundi, a 18 year old girl, who came from the central Dar es Salaam, will study in this school. She said, “I have been looking forward to studying in this quiet and peaceful college, but which has the state-of-art facilities and equipment for students! My dream is to develop my capability enough to operate a small farm even if it’s a small size and to acquire the certificate that enables me to get a job in the government sector.” She added, “I became very interested in Buddhist monks, Buddhism and Korea, even if I have a different faith. I really hope to visit Korea sometime in the future.”

Ven. Jaseung, the President of the Jogye Order, also made a visit to the college and met the students. He wore Buddhist beads to each student one by one and congratulated on their acceptance. He addressed, “I hope the Borigaram Technical Agricultural College will serve as the bridge that connects between Tanzania and Korea. The completion of the College was made possible thanks to the many generous Korean Buddhists.” He spoke to Korean Buddhists, “Please continue to support the Jogye Order and the Dreaminus so as to operate the College sustainably under our own power.”

Ven. Wonhaeng, the President of Central Sangha University, one of the Jogye Order’s delegates, said during the meeting with the vice-minister of Agriculture and Forestry, “If there is any Tanzanian student who would like to become a bhikkhu or bhikkuni, I’d like to support him or her to study in the Central Sangha University in Korea for four years and to help become an educated leader of the society who could contribute in the development of Tanzanian society.”

Ven. Jungnyeom, President of the abbots of all District Head Temples, also said, “It’s the pride of the Nation, Buddhism and Korean Buddhists to have established a College under the spirit of Buddhism in Africa. I will pray for the success and happiness of the students and for the Buddha’s compassion to be spread throughout the world.”

Mr. Seongda Goun, the donor of the land for the School together with Ven. Dongbong, also attended in the opening ceremony and expressed his thrill to see the completion of the college. “10 years have passed since I first visited Africa. Without the dedication of the President of the Jogye Order towards the overseas Dharma dissemination, without the support of the Korean Buddhists across the country, the completion of the College would have not been possible.”

Ven. Kyoungwon, the abbot of Gwangjesa Temple in Daejeon and the donor of the Triad-Buddha and holy sariras to the College which enshrined them in the auditorium, said, “Nothing could be better than this College of today. I am very thrilled and happy.” He made three bows to the audience.

The Borigaram Agricultural Technical College marked a new era in the history of Jogye Order’s Dharma disseminating efforts to overseas countries. In the past, the efforts were mostly made by individual Buddhist monks in overseas countries. At the organizational level, the efforts were limited only in the exchange with the Buddhist countries. But nowadays, it has expanded to the efforts of emergency relief activities to disaster-stricken areas and to humanitarian work to less-developed countries regardless of religion or background differences.

On this joyful and significant day, Tanzanian government and Korean Embassy to Tanzania promised to give full support to the operation of the College, while the Jogye Order’s delegates pledged on “One Temple Supports One Tanzania Student” campaign.

Mr. Song Eumyoung, the Ambassador to Tanzania, who spared no efforts to support the establishment of the school since its beginning, as there had been so many twists and turns during the process, spoke, “There is an African proverb, ‘If you want to go quickly, go alone. But if you want to go far, go with others.’ Without the bottomless efforts of Korean Buddhist society, we would not be able to enjoy the today’s success altogether. On this wonderful day when Buddhism visited Africa for the first time, I wish the Borigaram Agricultural Technical College tremendous success so as to develop as one of the world’s leading colleges in the future.”

The first principal of the College is Mr. Joseph Ndunguru (aged 73) said, “Education is the hope of Tanzania. This college is the valuable seed of compassion sown for the future of Tanzania, not to mention Mwasonga village and Dar es Salaam.”

He is originally from Malawi, one of the poorest countries in Africa. Agreed with the operating philosophy of Dreaminus that would like to give a fair opportunity to all Tanzanian students regardless of regions they live in, he accepted the post as the headmaster. He expressed his will and determination that he would run the school fairly, giving equal chances to students, based on the Buddhist teachings of compassion and equality.

He said, “The students were in the beginning a bit wondered and doubtful as they have no idea what Buddhism is about. But after learning the school philosophy contained in the name, borigaram, (bori refers to the Buddha’s teaching and garam means the place where it is spread), that the learning opportunity is given to everyone equally without any discrimination, they were thrilled and hopeful. I think they understood the Buddha’s teaching that everyone is the master of his or her own life and that one can realize what s/he wants when one strives hard enough.”

He also added, “I hope that the today’s zeal and aspiration of the students here could lead to the productive economic activities including employment, so that they could return as alumni who come back and help the juniors in this College and in other parts of the world that needs the helping hands more desperately. Keeping in mind the Korean Buddhists’ generous support, care and unsparing efforts until today, I will do my very best as the headmaster who has the ultimate responsibility of the College in running the school well.”

On the way to the College, the Jogye Order’s delegates visited the Muchamba primary school and donated about 60 chairs and desks to the school. Dreaminus has provided the nutritional meals to the children in this school.