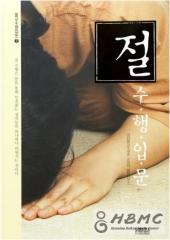 ▲ prerequisites of prostration cultivation
In order for the prostration to be established as a definite cultivation method, the practitioners of it should accept the Buddhist theories of Middle Path and Dependent Origination in advance. It’s because we are likely to fall into a mere physical exercise without having correct insights into the Buddha’s teachings.
Besides, as is the case with Ganhwaseon or other practices, how to perform prostration should also be taught, but not be taught by oneself. If, by any chance, one think that in doing a prostration practice the more, the better, it is completely misleading.

▲ What is the relation between Ganhwaseon and prostration practice?
There are two kinds of views on this matter. The one is to consider the prostration itself as an independent practice, and the other as a supplementary means of Ganhwaseon practice. Those who present the latter view also recognize it is easily accessible to the public and it can also make pratitioners strengthen their forbearance and Samadhi removing their karmas through contrition. But prostration itself does not guarantee the awakening of Buddha’s nature and wisdom. Therefore, it is desirable to do prostration practice at first, and then to investigate Hwadu along with it.