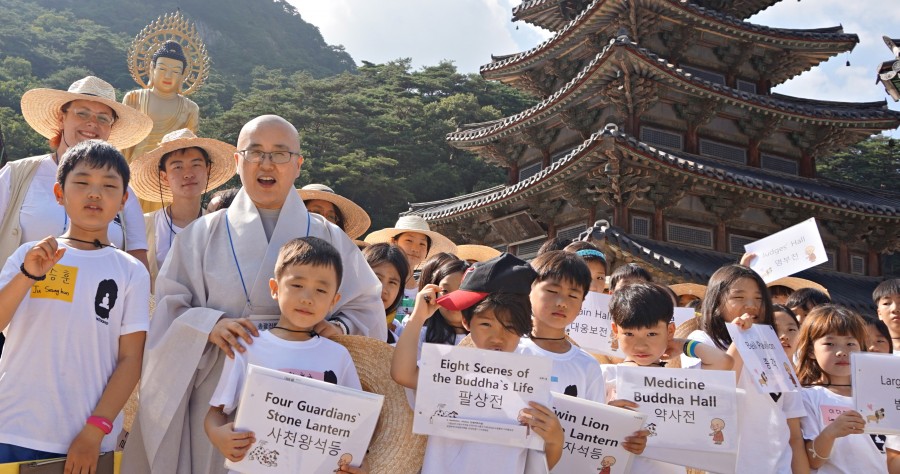 Happy Summer for Kids with the Buddha-Dharma:

The Vairocana International Meditation Center (Head monk, Ven. Jawoo) held an English Dharma Camp for Kids in Beopjusa Temple on Mt. Sokrisan this past August 4th. The center, located in Hongjae-dong, Seoul, runs the English Dharma school for kids on Saturdays and has held the English Dharma camp for kids every summer in mountain temples since its opening in 2006.

About 80 young children, including elementary and middle school students, arrived in front of Beopjusa Temple, where they were initially reminded of the temple etiquette and manners that they should keep during the camp period. The theme was “Let’s smile together,” through which Ven. Jawoo would like them to keep smiling based on the understanding that smiling makes oneself, one’s family, friends, and the whole world happier and brighter. At the opening ceremony, the students took the pledge, “I will learn Buddhist teachings, play together well with my friends, and make my time in camp fruitful.” They then moved to the temple grounds of Beopjusa where they were introduced to the temple in English. The children learned about the Beopjusa’s Eight Scenes of the Buddha’s Life, which is National Treasure No. 55, the Four Guardians’ Stone Lantern, the Main Buddha Hall, the Judge’s Hall, the Medicine Buddha Hall, and the Bell Pavilion, etc., all in English. The students were divided by age and formed teams respectively. The team names were Energy, Patience, Meditation, Wisdom, and Morality, which come from the Six Paramitas (Perfections).

Eunseo Chang, aged 13, said, “It was so great to learn English in such a beautiful mountain temple. Thanks to this English Dharma camp, this will remain in my heart as the happiest summer vacation of my school years.” The students also had time to picture their futures and learned to share happiness with their friends through meditation practice. The camp lasted for four days, until August 7th.

It’s the 10th anniversary for the Vairocana International Meditation Center and it has enjoyed an increasing number of lay Buddhists participating in the Saturday English Dharma School for Kids and the Sunday Meditation Class. Ven. Jawoo said, “The Center is also a warm refuge for foreign residents and immigrants living in Korea who face difficulties due to language and cultural differences. We at this center will continue to strive hard to realize our initial great vow of laying the foundation for the globalization of Korean Buddhism.”