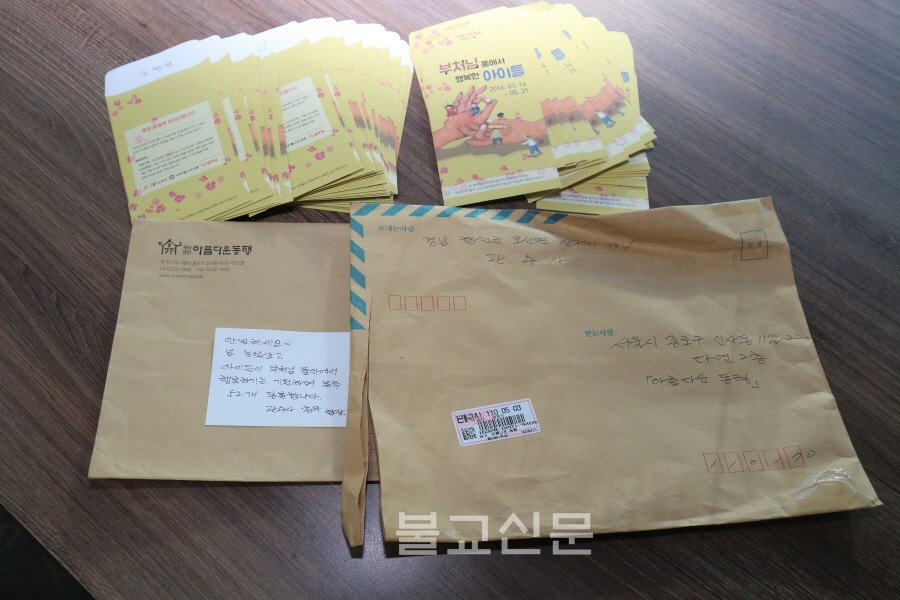 Dreaminus, the Jogye Order’s philanthropic foundation, conducted the fundraising campaign titled “For Happy Children in the Buddha’s Arms” nationwide for children living in underprivileged circumstances in Korea and other countries in celebration of the Buddha’s Birthday. The campaign ended on June 30 successfully thanks to the sincere participation of the temples and Buddhists all across the country. The total was $56,000.

Under the aim to make this world where children can grow without poverty, hunger but with dream and hope, this has been practiced annually around the Buddha's Birthday since last year 2015. This year, it is the 2nd round.

During the campaign period, many donation envelops came with stories. Songrimsa Temple in Yangsan sent 99 envelops that they collected. Gwansoosa Temple in Hapcheon sent 52 envelops along with the message that reads, "We wish for the happiness of children in the Buddha's arm!" Janggyeongsa Temple in Yongjin paid the visit to the office of Dreaminus and gave the donation that the teenagers and university members of the temple raised by making the wish tree and promoted to the temple members on the very Buddha's Birthday. Ven. Hyeta, the Buddhist monk of the Janggyeongsa, said, "There are many active young Buddhists in many local temples. I believe the experience of doing something for others has made these young Buddhists grow mature. Helping others of the same age must have been a meaningful and memorable work for them.

The fund of $56,000 will be used to provide scholarship, living expenses and cultural outdoor events to children in low-income, single-parents, or parentless families, to list a few. Those who enter the school on February 2017 will be given the school bags with some stationaries as a celebration of school entrance. In Tanzania, it costs only $0.1 per children to have one proper meal. Dreaminus will support children there by providing nutritional meals, improving their studying environment and providing books to them. With the public support across the country, Dreaminus can help the less privileged children both in Korea and Tanzania to grow healthy, hope and dream for their future.