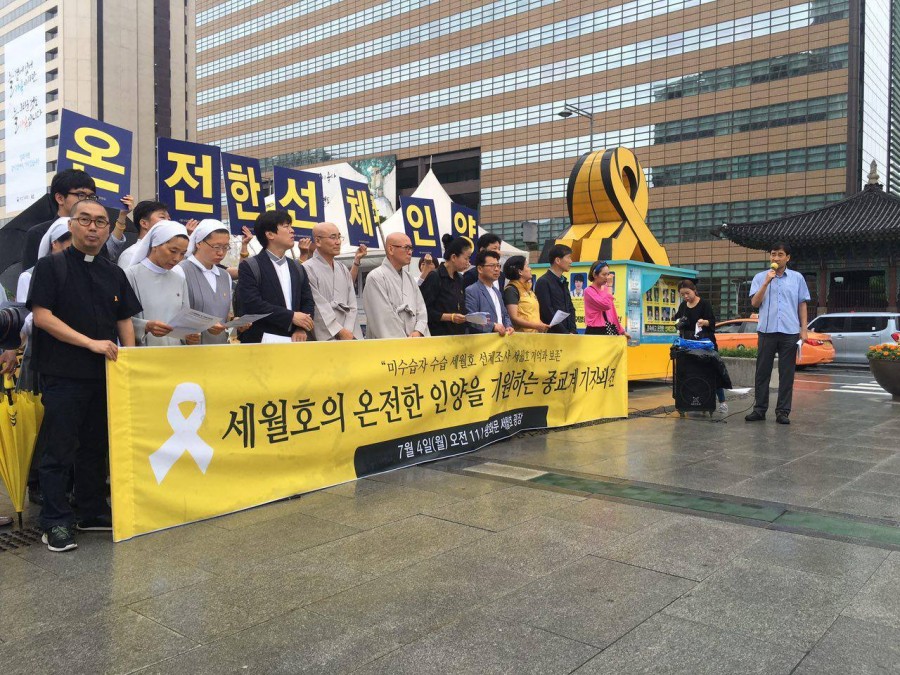 30,000 Bowings To Pray for the Successful Rescuing Operation of Sewol Ferry

In the morning of July 4th, pan-religious communities including the Social Affairs and Labor Relations Committee of the Jogye Order made the petition for Sewol Ferry public held at the press conference in Gwanghwamun Square, Seoul.
The petition was made due to the repeated failure of the government’s rescuing operation of Sewol Ferry. The government promised to start it on May and finish it by July, but the operation itself was delayed for three times. Salvage of the sunken ferry is something we must succeed in order to find those 9 missing people and to investigate and reveal the truth. Thus, all the religious communities in Korea has decided to conduct prayer services in each of their own way for the quick and successful rescuing operation of the Sewol ferry without any further damage.
The Social Affairs and Labor Relations in the Jogye Order held the 30,000 bowing ceremony by relaying 108 prostrations of individual participants from July 8 to 11 for 4 days in Gwanghwamun Square. Additionally, there was a grand public candlelight vigil for the successful Sewol ferry rescuing operation at this same place at 7:00pm on Saturday, July 9. The following is the letter of petition and appeal announced at the press conference. 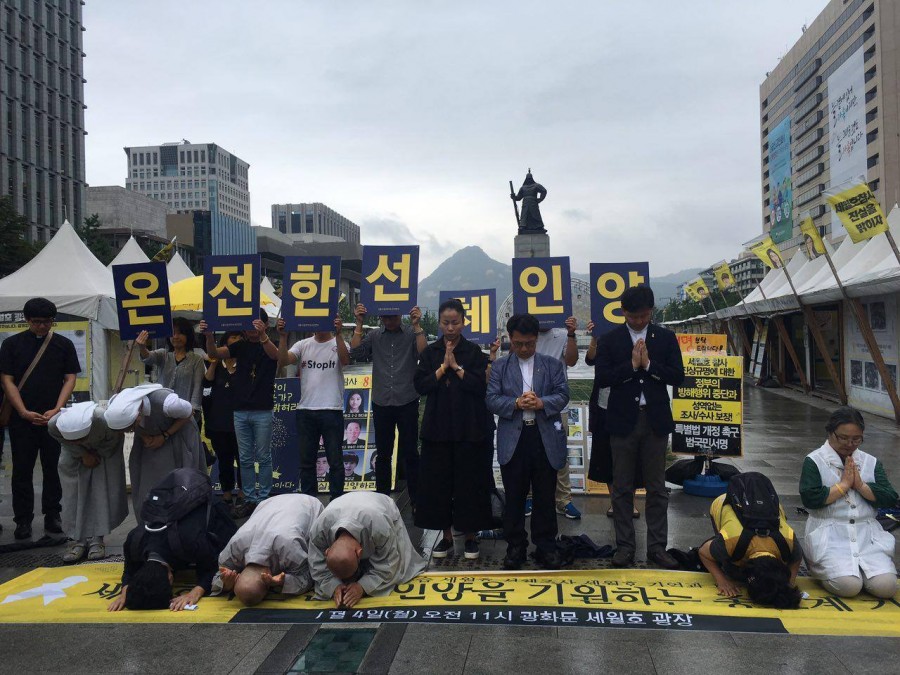 We pray for the safe and successful rescuing operation of the Sewol Ferry.
Lifting up the bow section of the ferry is scheduled on this coming July 11. According to the government’s plan, the ferry should have been already raised on the surface of the water. However, this lifting operation has been stopped and delayed three times since May 2016, the original operation date initially scheduled. During this process, the part of the ferry got damaged. Thus, we strongly demand that there should be no further delay and the operation on July 11 should succeed no matter what.
Go Changseok, Gwon Jaegeun, Gwon Hyeokgyu, Nam Hyuncheol, Park Youngin, Yang Seungjin, Lee Youngsook, Cho Eunhwa, and Heo Dayun..
These are the dear 9 names of those who could not yet come back to us. We cannot imagine how desperate and how eager the bereaved family members are right now and how cruel the time can be for them whenever they are informed of delays in operation. We stand together with them most earnestly and most whole-heartedly here and offer prostrations to pray together for the quick and successful salvage of the ferry.
This earnest wish for the quick and safe lifting without breaking the parts is not limited only to the family members. It belongs to all of the people in Korea. It is such a grave task of the nation. In the ferry, there are the traces of those we lost and the evidences that can reveal the true causes of the sinking. And, the ferry itself is the national heritage that we should preserve for future lessons. The doorstep that leads us to the restoration of trust that we currently have lost in the society is the successful salvage of the Sewol ferry without delays and without any further failures.
However, what we have witnessed has been causing doubt towards the government. It has been the government that avoided the salvage of the ferry by instigating the opposing public sentiment from Nov, 2014 when the searching operation ended. It’s been already quite a while since the technical examination and preparation was finished but the government made the announcement all of sudden that they would carry out the salvage project and take credit to themselves for it on the first anniversary of the disaster. But even afterwards, the government continued to exclude the bereaved family members from all the discussion including planning and selecting the salvage companies and exclude the Special Investigation Commission on 4/16 Sewol Ferry Disaster from investigation of the hull.
The first lifting operation scheduled on May was delayed due to the poor plan and preparation and the second operation on June failed under the excuse of heaving sea only to damage the hull. The ferry that was coming up was sunken again to the seabed and those who watched the process were deeply broken-hearted. We cannot help but being doubtful about whether or not the government has a will to lift up the ferry and whether they are only trying to find any excuses or problems not to make it successful.
We will offer the most sincere and earnest pray that we can do to never let the lifting fail again. This operation should not be a drill or practice. The government should make assurance doubly sure during the entire process of the salvage project, allowing not a single mistake or error any more, and make the operation process completely transparent and open to the public, promising the best operation that it can do.
Thus, here we appeal to the public. Please bring all your hearts here for the salvage project to be operated in a successful manner. Please keep watching the government so that it won’t only go through the motion of lifting up the ferry and then stop in the middle again. Please join in the prayer in order to call for all the power and energy of the whole universe so that the sunken ferry could successfully go up to the surface of the earth on July 11.