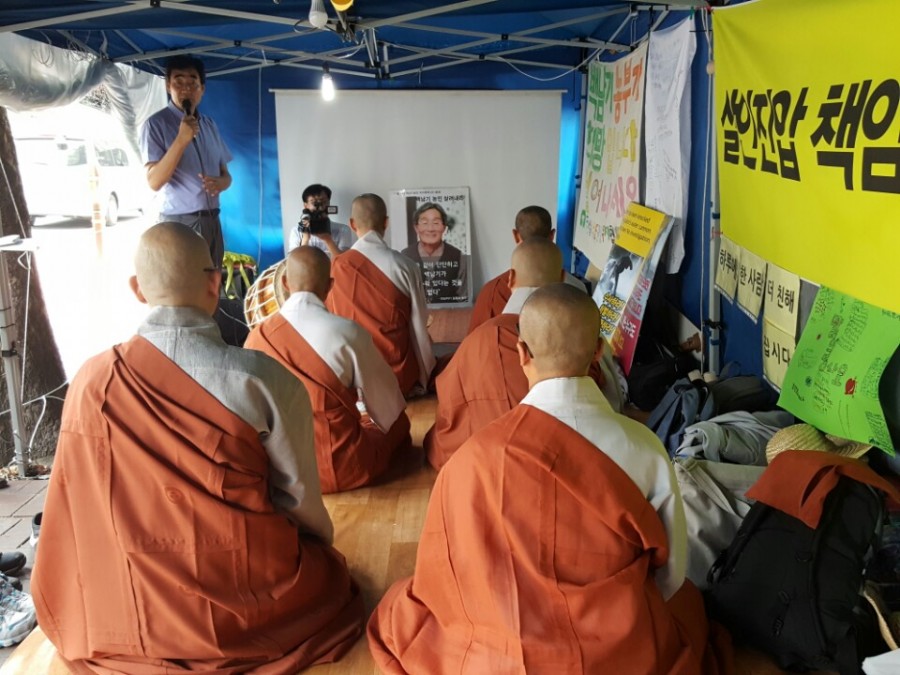 Dharma Ceremony to pray for recovery of the farmer, Baek Namgi

There was a grand public indignation rally on Nov 14, 2015, to redress the current government labor policies, the contorted Korean official history textbook, the retarded truth ascertainment of the Sewol ferry accident, the farmers’ issues and increasing poverty nationwide.

Workers, farmers, students, citizens and the poor took part in this rally. While the police repressed the protesters, the farmer Baek Namgi was collapsed by the water canon of the police targeting him preciously. The policemen fired the water of power directly to this 70-year-old farmer and continued to do so even when he fell down on the ground to his face and chest. The water continued to burst upon another citizen who ran to save him. It was without doubt the excessive abuse of the public power and a cruel violence committed by the government. He received the brain surgery at the Seoul National University Hospital but still is in the state of coma in an intensive care unit until today.

However, while 6 months have passed since then, no government officials and no policemen has made any formal apology, taken any responsibility for this grave injury, and no inspection has been made although the farmers’ association filed a complaint with prosecutors accusing the police of attempted murder.

The Social Affairs and Labor Relations Committee conducted the Dharma ceremony to pray for Baek’s recovery at the temporary shelter of the Farmer Baek Namgi Action Committee placed at the Seoul National University Hospital. The protest demands the official apology of the government, the truth ascertainment on the excessive oppression of the police, and measures to prevent any further abuse of state power.

▷ What made the farmer Baek come to Seoul?
The Park administration promised the compensation of rice price to farmers in the presidential election pledge, but after being elected, it announced the completely free rice market to the public without any consultation or agreement from the farmers. It promised the fixed price of $21 for the rice of 80kg before the election, but the price has dropped to $15 as a result. That is why farmers had to come up to Seoul and took part in the rally. 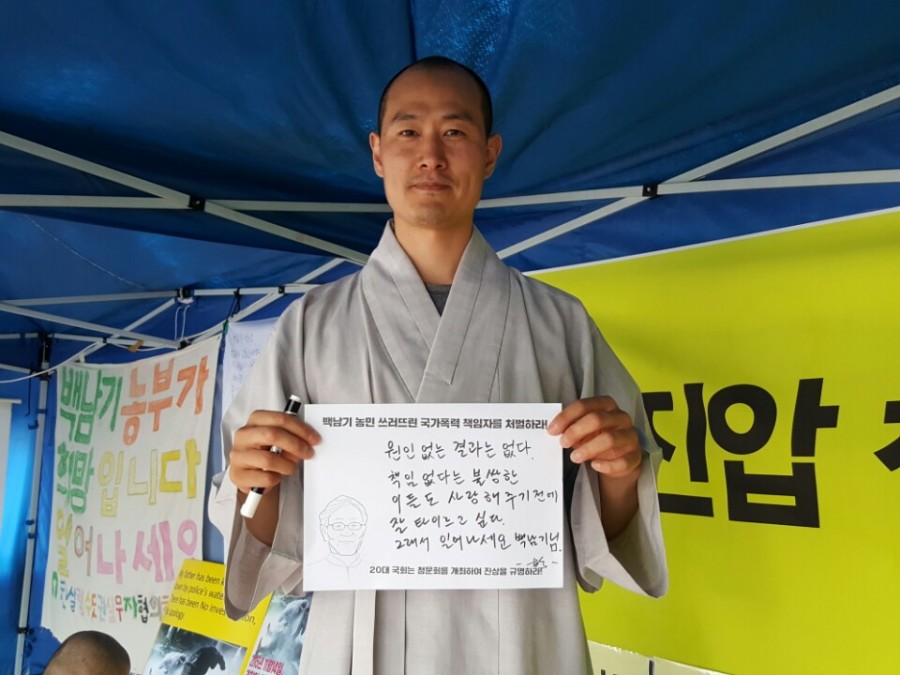 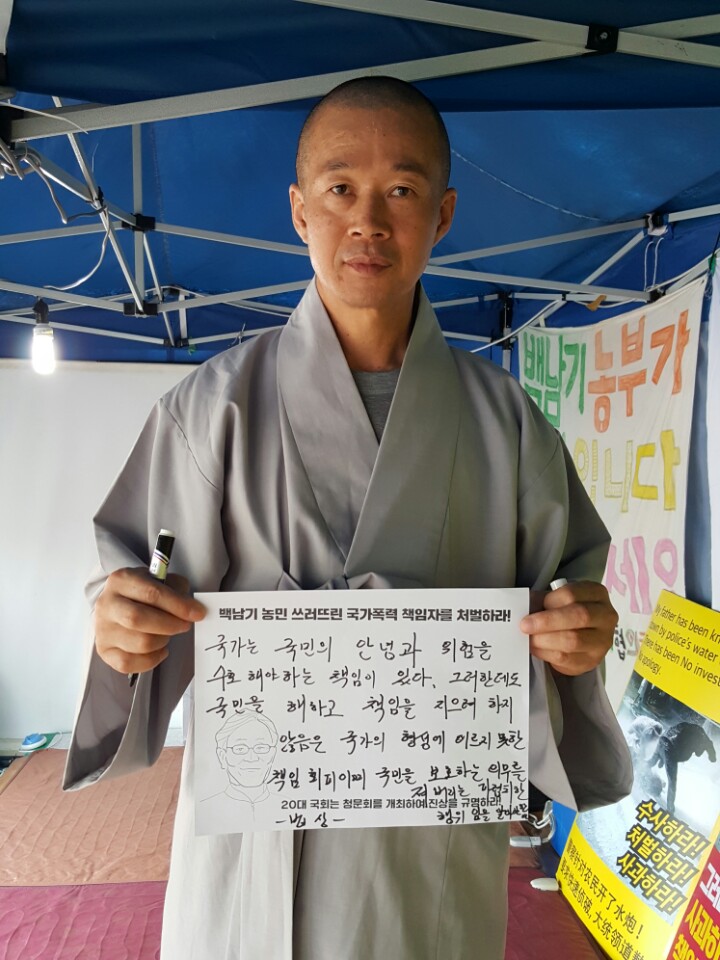 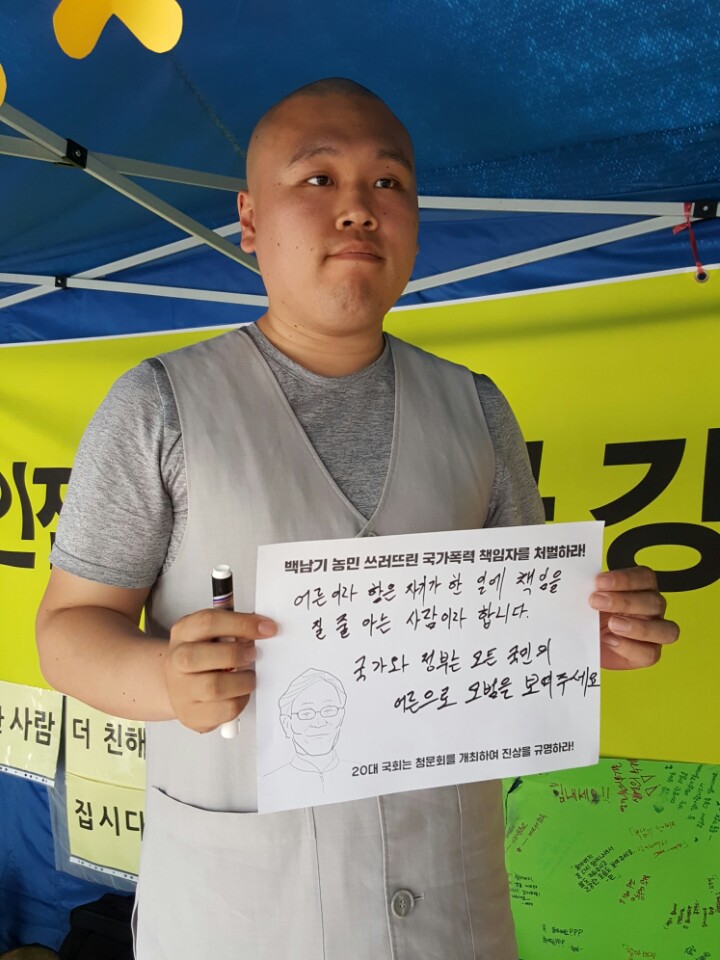 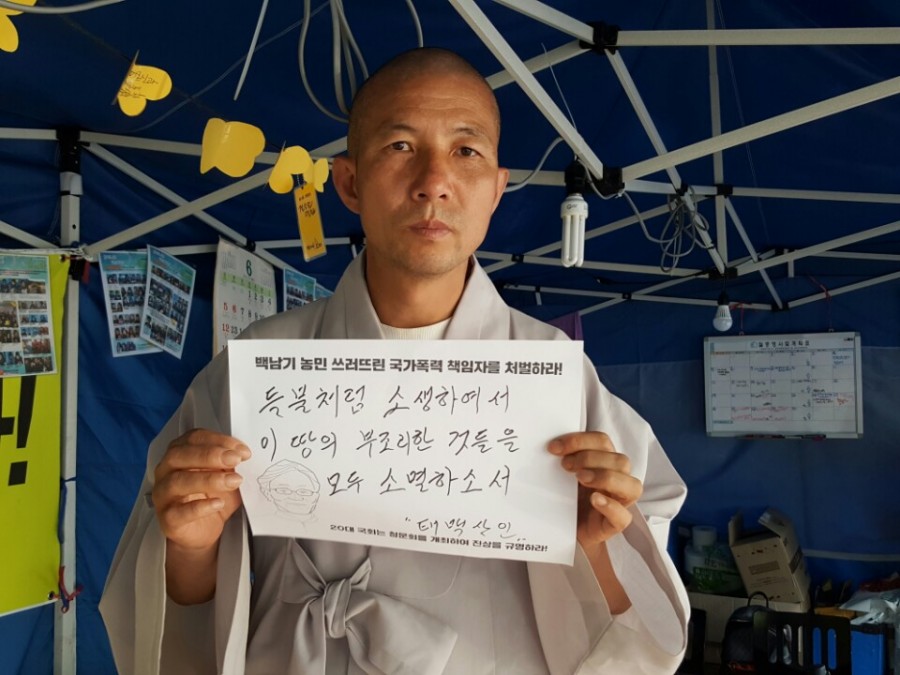 1.   Ven. Gogeum
“There is no result without cause. I would like to give a good talking to those poor who insist innocent and non-guilty. Please wake up, Mr. Baek!”

2.   Ven. Beopsang
“The state has the responsibility to keep and protect the well-being and safety of the people. Thus, harming the people and trying not to take responsibility for it is the intentional elusion and shameless behavior of the government discarding its duties."

3.   Ven. Yooeom
"Being an adult is who takes responbility for what he or she did. Please be a living model of a true adult to the public by taking the full responsibility."

4.   Ven. Hyemoon
"May you arise and wake up again and extinguish all the social irregularities and irrationalities on this land."