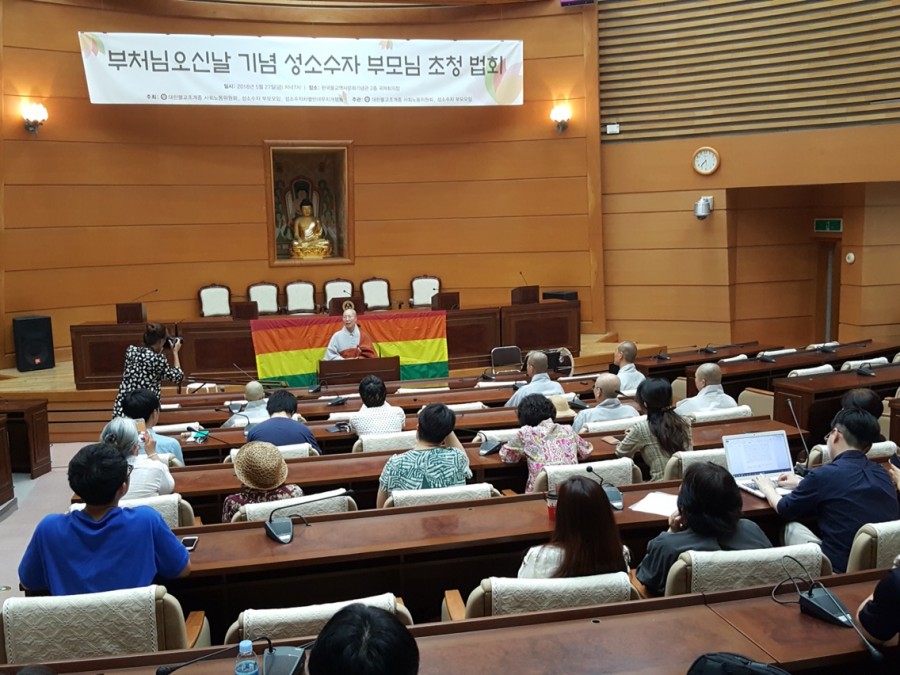 The Social Affairs and Labor Relations Committee held the Dharma Ceremony for the Sexual Minorities (LGBTI) and their Parents on the Buddha's Birthday at 7:00pm on May 27, on the 2nd floor of the Memorial Hall of Korean Buddhist Culture and History. The ceremony was held in order to provide them with support, consolation and encouragement of the Buddhist community based on the Buddha's teachings.

Ven. Docheol, the vice-chairman said, "Last year, we invited the LGBTI people here. But in this year, we invite the parents, too. It is because we would like to console the parents' minds who must have been suffering as much, to remind you that you are not alone, and to reconfirm that being a sexual minority is not something to feel guilty or faulty. We are here to be with you."

A mother, as the representative of the LGBTI, came out and thanked for this kind of opportunity to the Buddhist community. She said that she used to suffer a lot because she felt it was all her fault. But now she understands her child and accepts him as he is, and all what she wants is that he stays healthy, happy and confident as a member of the society. She ended by saying that the children's right to be happy is nothing different from our rights to be happy. Her speech touched the hearts of all the attendants.

Ven. Hyorok, one of the committee members, first met these people at the last year's Dharma ceremony of the Buddha's Birthday and upon this opportunity, she has offered them a regular Dharma meeting since then until today. She referred to the Vinaya where one can find how the Buddha treated those sexual minorities at his time. If the Buddha found a change in, for example, a bikkhu's sexual orientation, he transferred him to the bhikkhuni sangha and vice versa. Likewise, Vinaya has many details on homosexual bhikkhus and bhikkhunis in Sangha. They were expelled when they showed their love towards each other.

However, the Buddha did not make it an issue for those lay Buddhists. The only precept that the Buddha gave them was, “Avoid sexual misconduct." Sexual misconduct means cheating or sexual intercourse with a minor, etc., but does not include homosexuality at all. She emphasized that there is no Buddhist ground that sexual minority should be discriminated in the society only because of their sexual orientations.

She ended his talk by saying, "The Queer Cultural Festival is just around the corner. There must be many who interrupt or harass the festival. However, I ask you not to be the same people by being angry or resentful. Please keep a compassionate heart and treat them with this mind. This is the very way to take good care of yourself without doubt."