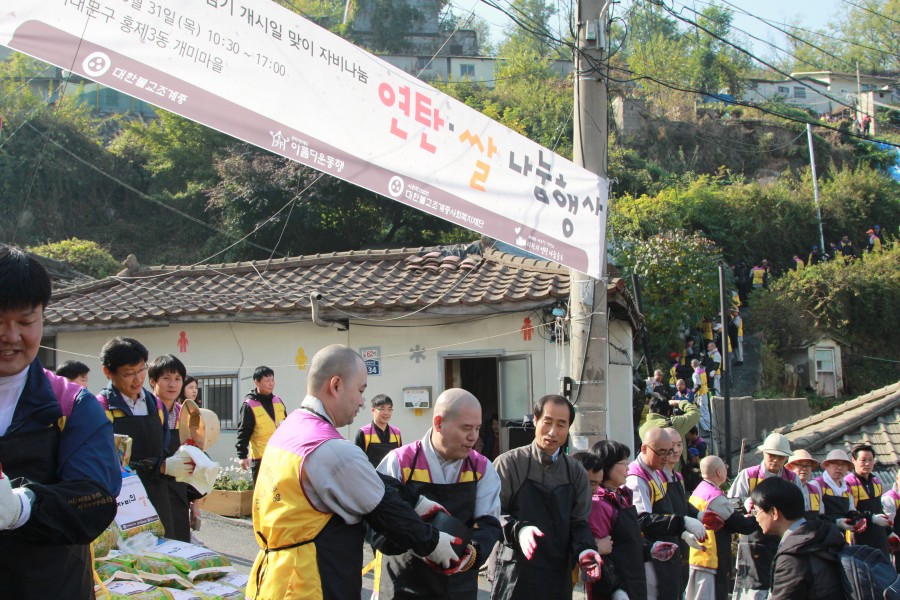 Most Ven. Jaseung, the 34rd president of the Jogye Order, as well as over 200 Jogye Order headquarters employees and other affiliated organizations, delivered charcoal briquettes and rice to impoverished villagers in Gaemi Maeul (“Ant Village”), one of the poorest areas of Seoul.
Ven. Jaseung made a sincere plea prior to the work’s commencement. He stated, “We similarly donated these coal briquettes here in Korea two years back. Although this task is difficult and demanding I’d like to sincerely ask you to put your best foot forward with this volunteer work. Maintain appropriate amounts of effort and care for your bodies to prevent any unexpected injuries or accidents.” The other members of the Sangha who joined in personally carrying briquettes and rice were Ven. Jiwon, president of the Bureau of Dharma Propagation; Ven. Jonghun, Director of the Department of General Affairs; Ven. Bohwa, Director of the Department of Social Affairs, as well as many others.
A total of 24,000 briquettes and 6,000 kg of rice was distributed to 80 poverty-level families and impoverished senior citizens living alone, along with 290 low-income families and senior centers.
One of the elderly recipients stated, “I am very grateful that the monastics took time out of their busy schedules to come to our neighborhood once again. In fact, a great amount of interest and effort has also been shown by Okcheon-am hermitage. I have been taking the vision supplements I recently received – I don’t know how I can ever thank you enough!”

“The ‘Ant Village’ is one of the last low-income villages in Seoul, often referred to by many Koreans as ‘Moon Village.’ After the Korean War, people who lost their homes gathered and pitched up tents where the ‘Ant Village’ currently stands. The name ‘Ant Village’ was given due to the relentless efforts of the residents who begin their work before dawn and continue well past sunset, resembling an ant colony.
The Jogye Order president Ven. Jaseung instigated volunteer programs in 2010 and 2011 in Baeksa village in the Nowon district and Gaemi village in the Hongjae district of Seoul. Moreover, the president has been taking part in compassionate visitation and sharing events each month in various social support facilities.
This special compassionate donation program was initiated with the aim of sharing with underprivileged and marginalized communities in need, with participation by various officials including the Head Seodaemungu
Ven. Jaseung stated, “Although there were obstacles and difficulties during the time of my service as the 33rd president, thanks to the support I received, including that from the president from the Bureau of Education, the president of Dharma Propagation, members of the Sangha, and the Jogye Order employees, we were able to resolve the issues successfully. I am sure that the term I serve as the 34th president of the Jogye Order will hold even more important responsibilities and duties. Let us come together to support and encourage each another and make it successful!”
Ven. Jaseung also added, “The employees of the Headquarters of the Jogye Order must work hard to support the needs of district temples. Moreover, they help to ensure that elderly Sangha members do not have to worry about retirement. With a joyful heart I will do my utmost to make this 34th presidency the best term ever.”