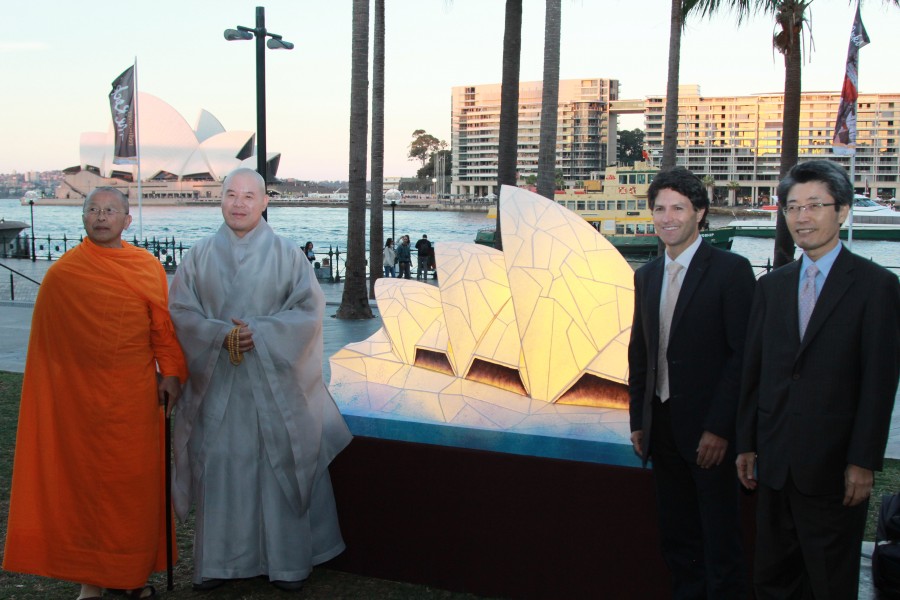 (Photo) On August 28, 2013, a lantern lighting ceremony was held at the event plaza in front of the Museum of Contemporary Art (MCA) in Sydney, Australia. The Sydney Opera House, representing Australia, was seen over the One Pillar Gate, representing Korean Buddhism.
This event, known as ‘Korean Buddhism: 1,700 Years of Wisdom,’ was jointly organized by the Jogye Order of Korean Buddhism (Venerable Jaseung, the president), the Cultural Corps of Korean Buddhism, and the Korean Consulate General in Sydney. It was sponsored by the Korean Ministries of Culture, Sports and Tourism, and Foreign Affairs, and took place in Sydney, Australia this past August. The Korean delegation, which included Ven. Jaseung, the president of the Jogye Order, and Ven. Jiwon, the executive director of Dharma propagation, visited Sydney and stayed there from August 23-30. This event was created as part of the project, “Globalization of Korean Buddhism”, the core task of the 33rd Administration, which aims to promote the excellence of Korean Buddhism and Korean traditional culture worldwide. It was begun in New York and Paris in 2010. 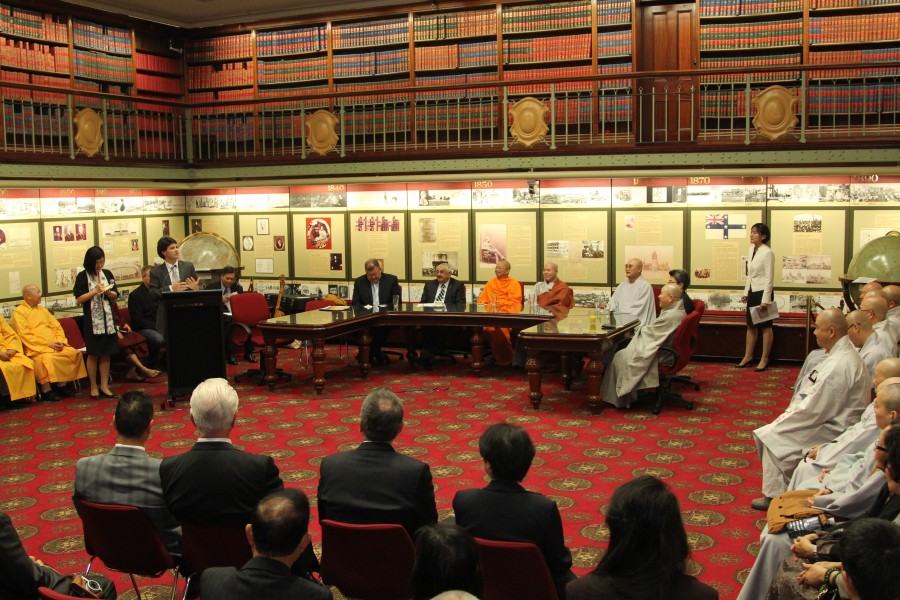 Compared to previous years’ programs, this event in Sydney came closer to the general public by utilizing various cultural activities. The Korean Buddhist culture experience hall prepared at the MCA Square, which opened from August 24-28, drew about twenty thousand people who participated in many different kinds of Korean Buddhist and cultural activities. The activities included making paper lanterns, coloring dancheong (Korean traditional multi-colored paintwork on wooden buildings), making Buddhist beads, making woodblock printings of Buddhist sutras, and so on. Korean traditional paper lanterns and paper-mache dolls were also exhibited at the square. Since the MCA has a large transient population who use this part of Sydney as a place of rest, it is estimated that the total number of visitors to the event could even have been hundred thousand people, taking everyone into account. 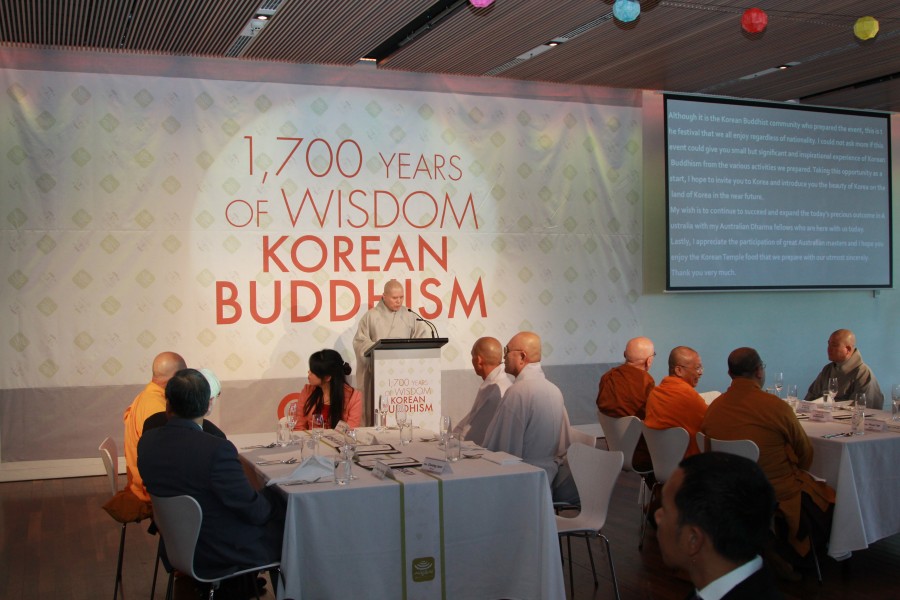 Whereas previous events held in New York and Paris invited only leading members of society, such as politicians and business leaders, for an introduction to Korean temple food and traditional culture, this event was prepared in collaboration with the Buddhist Federation of Australia (BFA). While the delegation had lunch with the BFA, attended the reception of the National Assembly and had the official dinner banquet with the members of parliament, they not only became associated with the local monks who came from Thailand and Vietnam, but united Australian Buddhist community with the Australian politicians and conveyed the stature of Korean Buddhism to them.
Another new aspect was the involvement of a local Korean temple, Jeongbop-sa, in the event preparation from the very beginning. This was the first time the Jogye Order of Korean Buddhism had attempted this, and it was intended to build the capacity of the local temple to continuously promote Korean Buddhism even after the event ended. The monks and the lay members of Jongbop-sa was involved in preparing and running the activities, thereby contributing to the event’s successful completion.
Venerable Jaseung said on the final day, "We became close to local Australians through this event’s various cultural activities." He added, "I deeply realized once again the importance of diverse programs in which ordinary people can enjoy participating. That is the key to the worldwide promotion of the Korean Buddhist culture and traditions."