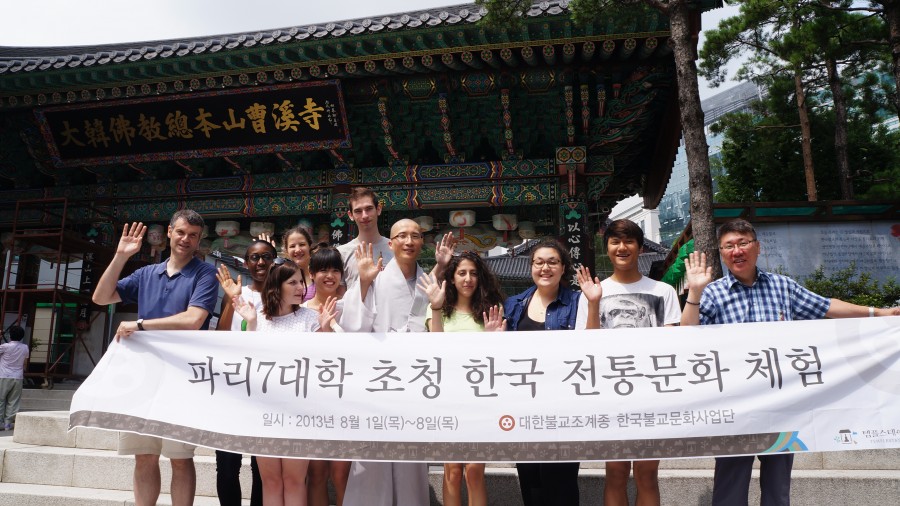 A group of students from the Korean Studies Department at the University of Paris 7, France, recently visited Korea and toured several representative Korean temples, ancient palaces, and other cultural sites throughout the country. The group experienced both traditional Korean and Buddhist cultural sites with this opportunity. The students visited Most Venerable Jaseung, the President of the Jogye Order of Korean buddhism, and expressed their gratitude for him having invited them to Korea.
The group consisted of eight students and one professor, Mr. Yanik. The group’s visit to Korea was arranged through the invitation of the Cultural Corps of Korean Buddhism. Their tour in Korea was for eight days, from September 1-8. This was the fulfillment of the promise that Venerable Jaseung made in 2011 when he visited Paris, France.
Beginning with their participation in the Templestay program on September 2, the group completed the program by visiting Bulguk-sa temple and Seokguram Grotto on September 4th, experiencing Seon meditation at Beomeo-sa temple on the 5th, and finally visiting Haein-sa temple and its Tripitaka Koreana on September 6th.
At Jijokam of Haein-sa temple, they had a conversation over tea with Venerable Hyangjeok, the chairman of the Central Council of the Jogye Order, who related the story of the foundation and history of Jijok-am hermitage. He also shared his understanding of the cultural differences between the West and Asia, along with the characteristics of Korean Buddhism. Ms. Nawel, one of the students, said, “I love the atmosphere of Haein-sa – It is quiet and fresh, and it gives you a feeling of beauty and brightness.” She added, “It was such a wonderful experience for me to actually see the Tripitaka Koreana that I had previously only heard of.” Venerable Hyewon, the abbot of Gilsansa who accompanied the group throughout the tour said, “They had already had a basic foundation in Korean culture, so if this kind of group were to regularly visit Korea, they would make an important contribution to the cultural exchange between our two countries.”
At the end of the tour, the group again visited the Venerable Jaseung with whom they previously had a pleasant talk. Professor Yanik thanked him by saying, “From this invaluable opportunity of experiencing Korea, my students have realized that Buddhism is the foundation of Korean culture.” Ms. Nellie shared her thoughts about this tour, “I am grateful for the many venerable Buddhist monks who shared their great wisdom with us.”
Venerable Jaseung promised that he would continue to invite groups of students from the Korean Studies Department at the University of Paris 7– if Professor Yanik sends the students’ feedback reports on their visit to Korea once they return.
The students at the University of Paris 7, France gained hands-on experience of Templestay and Ganhwa Seon meditation by visiting temples such as Donghwasa, Haeinsa, Bulguksa, and Beomeosa during their one-week stay in Korea.