On June 22, the Supreme Court finally ruled in favor of changing a transsexual’s gender description in the family registry. With the decision, transgender individuals in Korea ranging from 5,000 to 30,000 came to be socially recognized. But adverse response is to rise as well. Religious communities against the court ruling are raising their opposite voices. While the majority welcomed the ruling saying it "accommodated the right to pursue happiness, giving hopes to social minority.", some religious communities like Christianity or Catholicism demonstrated their oppositions to it. Then, what is the Buddhist community’s opinion? 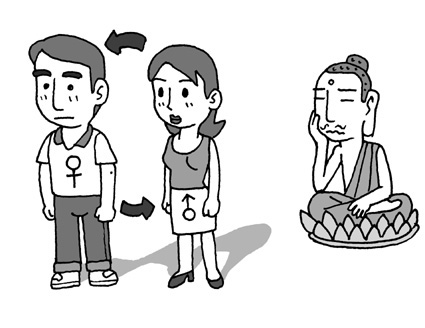 Mugwan Sunim, director of Traditional Vinaya Seminary of Haeinsa Temple, showed positive opinions on the transsexuals joining the Buddhist priesthood. He said, "There is a precept banning the bisexual who has both male and female genitals at the same time from receiving Monastic Full Precepts. Such a ban is to prevent from losing purity not only of the individual concerned but other practitioners as well. But with regard to transsexuals, they have already been fixed into a certain sex, so their receiving priesthood provides no problem." and added, "There is no concrete evidence of sex transformation at Buddha’s times, but viewing from today’s standard, our Buddhist community should also respect their rights."

Prof. Peter Harvey in ’An Introduction to Buddhist Ethics: Foundation, Values and Issues(Cambridge University Press, 2000)’ explained that according to early Buddhist sutras human’s gender could be changed during the transmigration, yet such a change could occur even during a certain life and he also argued that even transgendered males and females, but not bisexuals owning both sexes, could attain Enlightenment. According to his explanation only bisexuals, but not transsexuals, were prohibited because bisexuals might delude both males and females.

But the Buddhist Community doesn’t unconditionally accept transsexuals. Jihyeon Sunim, director of traditional Vinaya Seminary of Songgwangsa Temple, said, "In terms of human rights, we welcome the court decision but as for receiving Monastic Full Precepts there is a difficult problem. There are some factors that are inconsistent with early sutra’s rule to join the Buddhist priesthood, and receiving the priesthood means taking charge of Sangha community and taking the lead of inferior monks’ cultivation, setting a model in every respect. Considering the above-mentioned, transsexuals cannot be granted Monastic Full Precepts." Prof. Kim Seong Cheol at Dongguk Univ. said, "Sex change is caused by the sexual desire of individuals. So, homosexuals and transsexuals can also be considered to have strong gender desires. Discrimination of transsexuals is not a good thing at all in our society but the idea of sex transformation doesn’t match the teachings of Buddhism."

Once the change of gender description in the family registry is allowed, social confusion seems inevitable. Cheolwoo Sunim, director of traditional Vinaya Seminary of Pagyesa Temple said, "It is a matter of precepts whether the transsexuals who changed both biological and social sex should be allowed to join the Sangha community, so this controversial issue needs more thorough discussion."