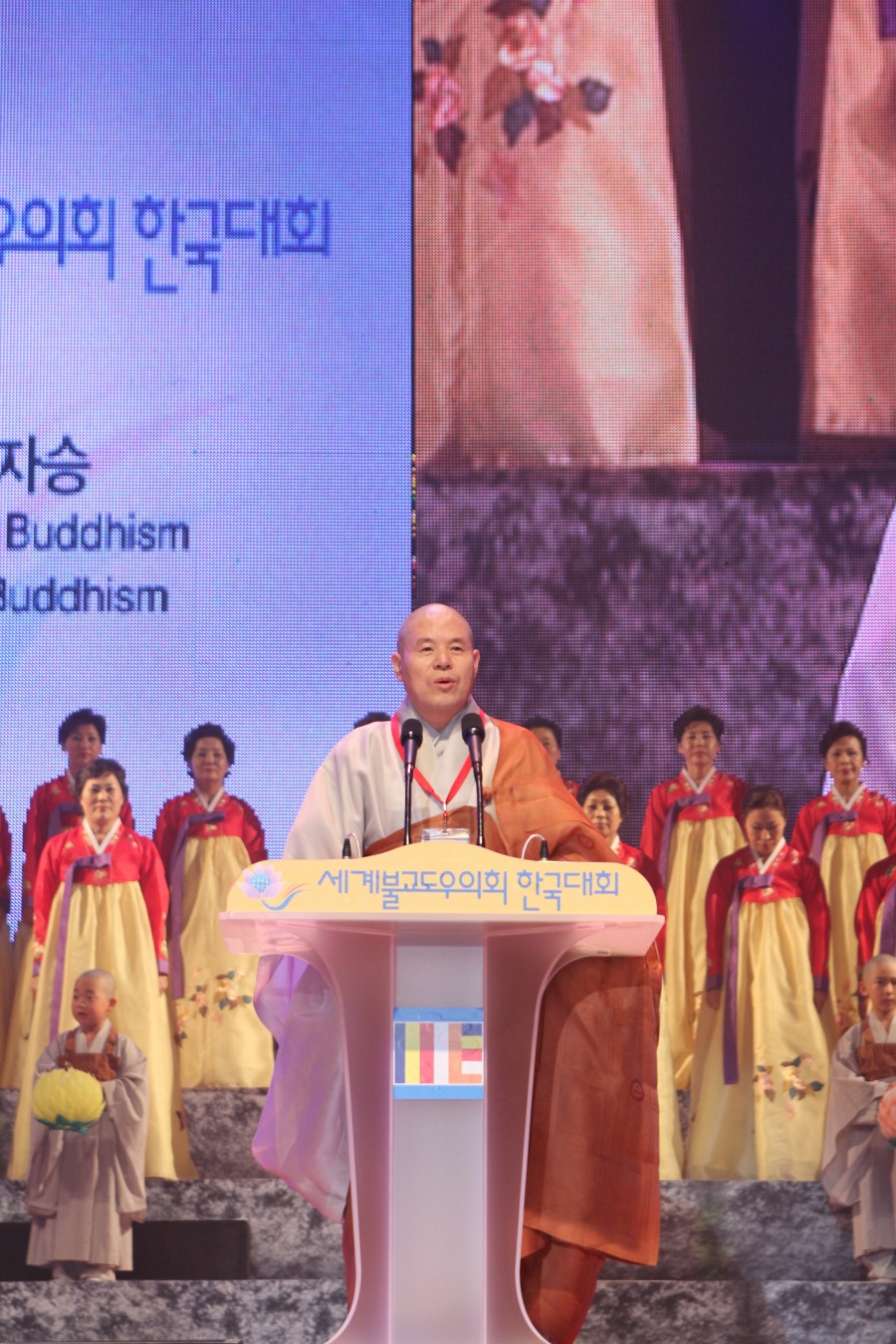 <Pic. 2   President of Jogye Order of Korean Buddhism during the opening ceremony> 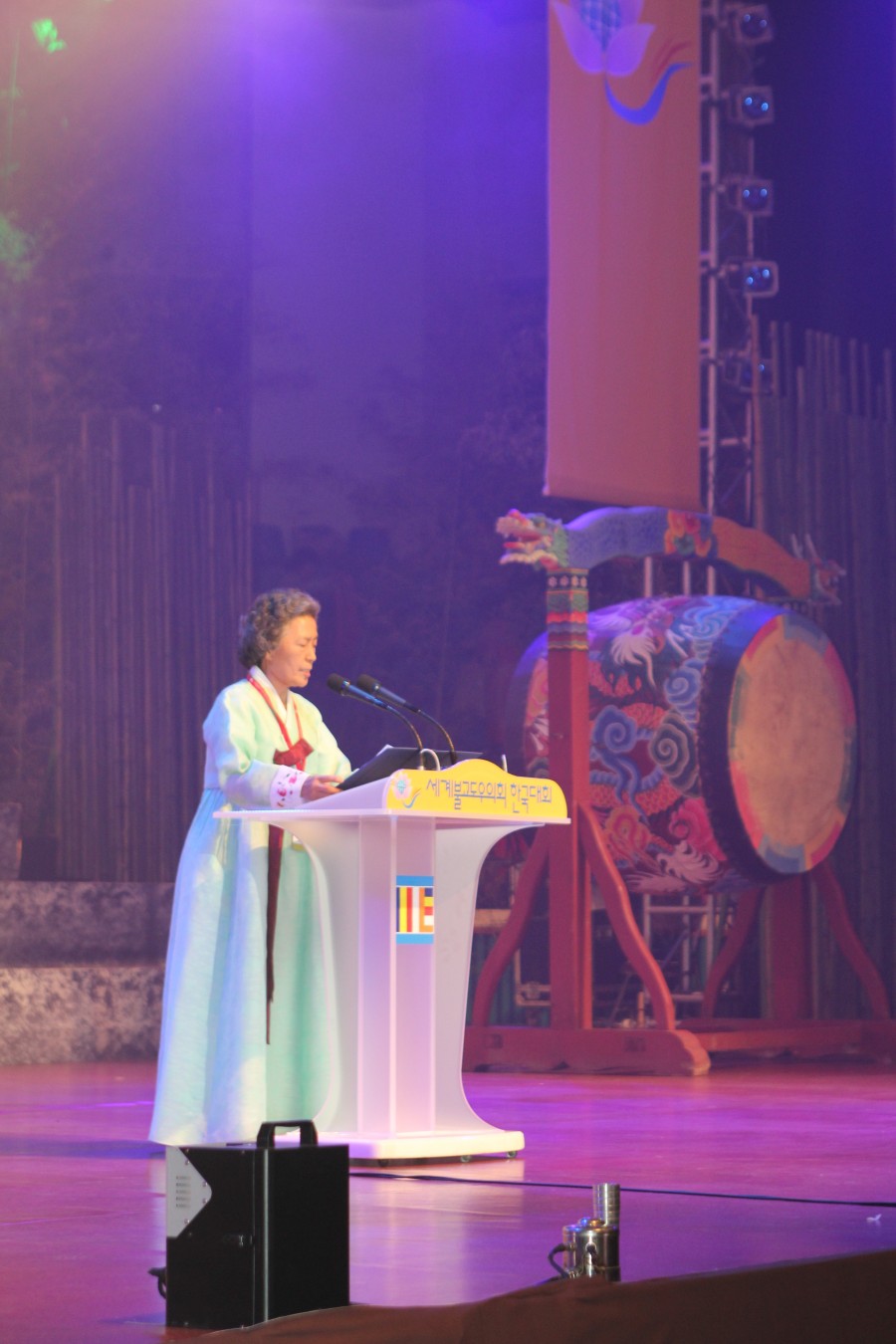 <Pic. 3  Presiden of Lay Buddhist Organization of Korean Buddhism at the Opening Ceremony>

Dr. Eui Jeong Kim, the President of the Lay Buddhist Association of the Jogye Order also welcomed the participants with the following words. “The WFB General Conference provides an opportunity for the world Buddhist leaders to work together and have informative exchanges to strengthen fellowship among Buddhists. The main objective of the Conference is to bring together the hearts of the world Buddhists and to help Buddhist teachings come alive. I hope the discussion which will take place during the Conference will help direct people to the correct path and lead all sentient beings to happiness.” Honorable Phan Wanamethee, the president of WFB added, “I wish this Conference will be the one which contributes to the world peace in the 21st Century and finds an alternative to the problem of the world’s environmental decline.”
During the Academic and Business forum of the Conference, many erudite scholars from around the globe gathered for earnest discussions on the topic of the “Interconnection of East and West and the Environment.” Ven. Karma Lekshe Tsomo, the professor at San Diego University and president of the International Association of Buddhist Women, Brian Daizen Victoria, a professor at Antioch University in Ohio, well known for his book <Zen at War> in Korea, and Paul David Numrich, a professor at the Theological Consortium of Greater Columbus in Ohio, presented their papers on Buddhist philosophy, Buddhism and violence, and the social role of Buddhism respectively. The speakers cast light upon the Buddhist thoughts of the times, in collaboration to find solutions to the world’s problems and help enhance the influence of Buddhism in the world. Eun Su Cho, a professor of the Department of Philosophy at Seoul National University, Pankaj Mohan, a professor of the Academy of Korean Studies at the University of Sidney in Australia, and Woo Sung Huh, a professor of philosophy at Kyung Hee University were the commentators for the Forum. Ven. Jinwol opened the forum with Ven. Dammaratana, the honorary president of the French Buddhist Association and the vice president of the WFB, introducing the presentations.
The World Fellowship of Buddhist Youths (WFBY) Academic forum held on the 11th of June was conducted under the topic of “the Contemplation on a Practical Orientation of the Environment and Life.” Ven. Do Beop, the Chairman of Harmonious Debate of the Jogye Order, Christie Chang, the president of the International Association of Buddhist Women, and Min Yong Lee, director of the Institute of Korean Buddhism presented their papers. The video of the traditional practice environment of the Buddhism in Korea was presented by Jong In Kim.
Beompae Concerto, the Korean Intangible Cultural Property #50, was played at the Grand Ball Room of the Ocean Resort on the 13th of June. Other cultural performances enjoyed by the participants were the Butterfly Dance, Traditional Buddhist performances, and the Children’s Choir performances. The 1000 years of Tripitaka Koreana music performance at the Heungguk Stadium allowed for a better understanding of the valuable Korean cultural heritage to the world. The spectacular musical “Songs of the Karma” on the 14th and 15th also received great applause from the audience, as the story line, music, and special effects pleasantly surprised all those in attendance at the Conference.
Building upon the momentum of the Conference, the Jogye Order of Korean Buddhism and the Lay Buddhist Association of Jogye Order also fostered friendly relations with overseas scholars. With its 17,000 years of Korean Buddhist history, the Conference allowed for presentations of the tradition and culture of Korean Buddhism to the world Buddhists. The WFB Conference in Yeoju was a chance to share with the world the Korean Buddhist cultural treasures, including the templestay programs, temple food, and the Lotus Lantern Festival. It is with great hope that the success may be carried over to the World Religious Leaders Conference, also hosted by the Jogye Order of Korean Budhism in 2013.
The Following Yeosu Declaration of The World Fellowship of Buddhists was read to mark the closing of the 26th WFB Conference.
Declaration of The 26th World Fellowship of Buddhists
We, the participants of the 26th General Conference of the World Fellowship of Buddhists held from June 11 - 16 B.E. 2555 (2012) in Yeosu, Republic of Korea, with the theme of "Buddhist Ecological and Environmental Thought and Practices for the 21st century", having explored the issues concerning Buddhism and the world, have unanimously resolved the following :
10.To improve Buddhist youth development and leadership programs to strengthen their capabilities to become promising future leaders in different parts of the world. 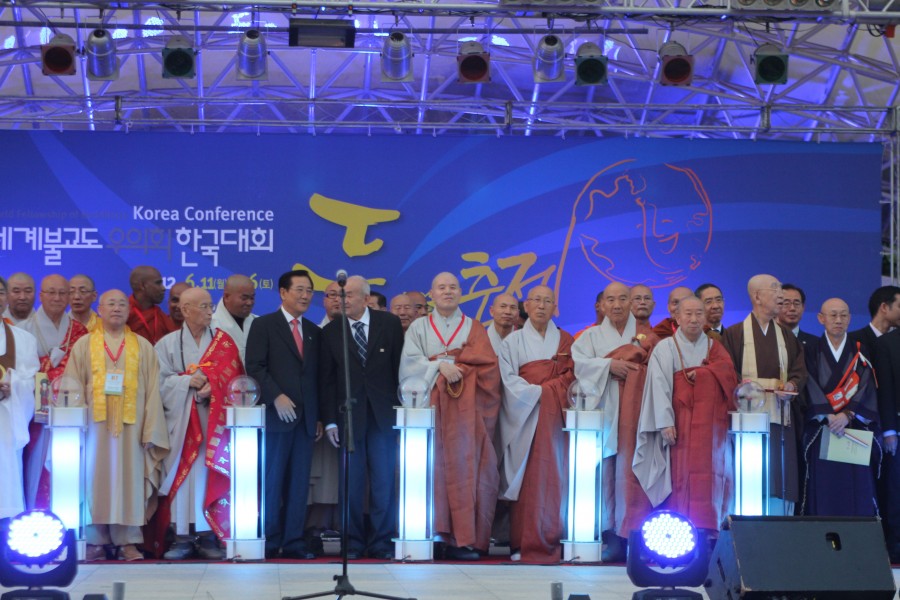 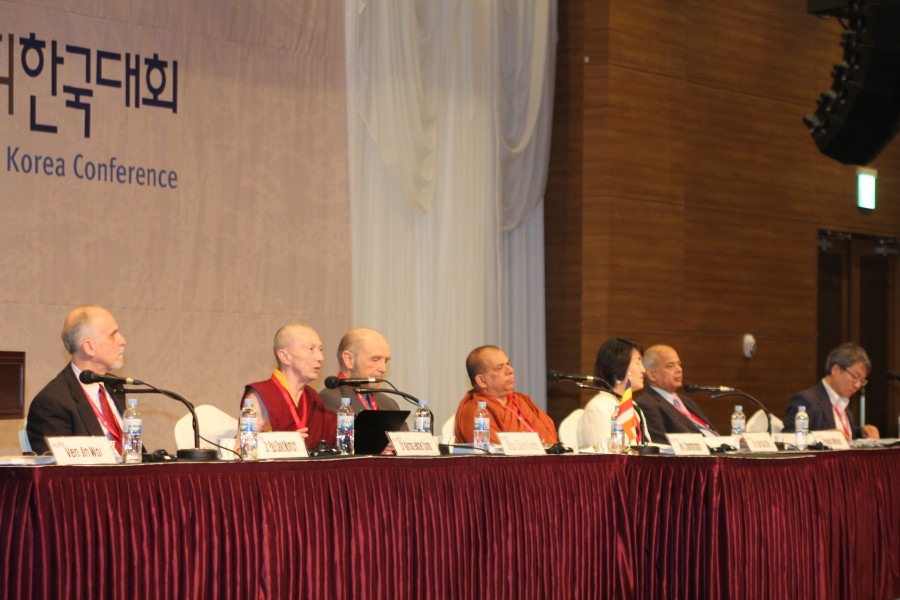 <Pic. 5 WFB Academic Forum. Some of the most world renown buddhist academic scholars
gathered together in Yeosu>