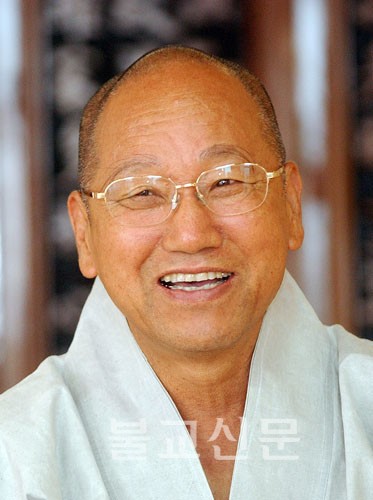 On December 14th, The Council of Elders had an election at the Center for Korean Buddhist History and Culture for the selection of the new spiritual leader. The Great Patriarch Jinje-beopwon, a member of Council of Elders was appointed as the 13th Supreme Patriarch unanimously. This election was attended by Ven. Jongsan (Head of Council of Elders) along with 20 other members from the Council, The Most Ven. Jaseung (President of Jogye Order), The Most Ven. Boseon (The Head of Central Council), and The Most Ven. Beopdeung (Executive Director of Precepts Council). The supreme patriarch’s term will begin on March 26th, 2012 for the next five years.

Followed by the election, ceremony to announce the new patriarch to the Buddha, along with incense offering and the three prostrations ritual took place at the main Buddha Hall of the Jogye-sa Temple to show respect to the Buddha. In addition, Ven. Jaseung and the members from the Central Directorate of Religious Affairs celebrated the event in the congratulatory ceremony. The new Patriarch then returned to Donghwa-sa Temple, the Head Temple for the 9th District of the Jogye Order where he currently resides.

The Supreme Patriarch Jinje stated in his acceptance speech, “I am very grateful that great masters from the Council of Elders have chosen me as the leader to represent the Jogye Order” and added, “I will follow the definitive opinions from the Council of Elders to create peaceful future of Jogye Order. I will try my utmost best to propagate Ganhwa Seon (Traditional Korean Buddhist Meditation) to the world, which can be considered as the essence of oriental spiritual culture.

The Great Patriarch Jinje was born on 1934 in Gyeongnam Province. He received his novice precept on 1953 in Haein-sa Temple under Ven. Seokwu and received his full ordination under Ven. Hyewun, also in Haein-sa Temple. He also received numerous Dharma lineages from great Seon masters of Korea, such as Ven. Hyanggok, Gyengheo, Hyewol, Wunbong, and Hyanggok. On 1971and 1999,        he established Haewun monastery in Busan City Haewundae and Geumcheon-sa monastery in Gyeongju City respectively, to propagate Buddhism in the region and establish Seon lineage.

He became the member of Council of Elders in 2003, and on 2004 received the great Patriarch Dharma status from the Jogye Order, which is the highest status in Jogye Order after the Supreme Patriarch.

Some of the Dharma books published by the Great Patriarch include, <Laugher of Stone Statues><100 Questions and Answers of Seon Buddhism> < Godamnokwol> published in Korean and <Open the Mind, See the Light> published in English.