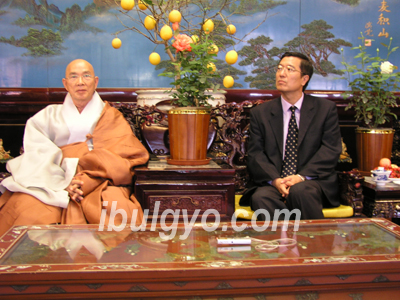 On June 11, Ven. Doyoung Sunim and other Sunims of Bureau of Missionary Activities participated in the Joint Ordination Ceremony for the Chinese-Korean Buddhists at Guangjisi Temple. Approximately 100 Korean Buddhists from all areas of China including Shanghai, Nanking, and Quanzhou, etc. attended the ordination ceremony. 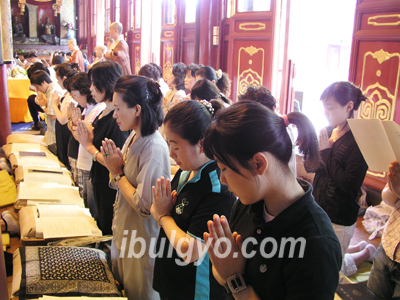 The testimonial Dharma teacher, Ven. Doyoung Sunim, said to the Korean Buddhists, “Please practice Mahayana Bodhisattva’s Way and increase your faith in Buddhism.” He added: “Taking this opportunity as a momentum, Korean Buddhism and Chinese Buddhism should strengthen their ties and do more diligence in order to establish the world Buddhism.” In this Ordination ceremony, Ven. Doyoung Sunim appointed Jinmyoung Sunim to the post of Leading Dharma Teacher of Manwolsa, the basic center of Korean Buddhist Association in Beijing.

Following the ceremony in the afternoon, the members of Bureau of Missionary Activities held a social gathering meeting (2:30-5:30 PM) with the main theme, “The current situations and future direction of Korean Buddhist Association in China.” The participants achieved the following consensus: We should understand the special characteristics of each area. Not only female lay Buddhists but also male lay Buddhists should actively organize the Buddhists. Particularly, the Beijing Korean Buddhist Association should make exemplary activity cases.