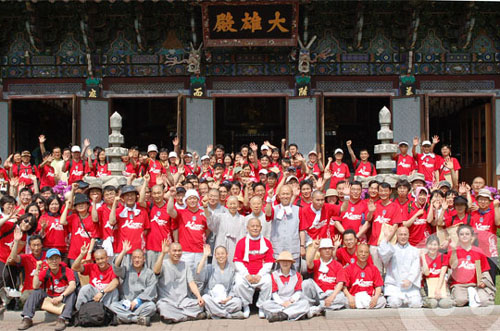 Sunims of the Jogye Order of Korean Buddhism became "Red Devils" for a day casting off their grey robe. They, in red T-shirts, assembed at the gate of the Buk-han Mountain trail at 10:00 hrs on June 9, 2006, four days before the Korea vs. Togo game. At first other mountain climbers mistook Sunims for the World Cup suporters. But they were surprised to find them to be none other than Sunims in "Red-Devil" uniform.

Some of the Sunims from the Department of Discipline wore sunglasses and turban made of towel. It all made the people around very happy. They were all uniform in their look: the same hair dress, that is, shaven head, the same grey trousers, the same white rubber shoes instead of the hiking shoes. Most of them were the staff members of the Jogye Order.

The occasion was to pray for the success of the Korean World Cup soccer team. The placard read: "The World Cup Game for Friendship and Harmony." All 150 participants, including lay staff members, wore red T-shirts, even Jikwan Sunim, the Executive Director of the Administration of the Jogye Order.

Before starting the climbing, Ven. Jikwan Sunim gave an address saying, "The spirit of the World Cup Game is the harmony and mutual understanding of the whole world." Then he went on to say that as all the lives in the mountain live in harmony, let us pray for the unity of the people of the world by eliminating inequality and conflict.
After the address, Seonmuk Sunim, the Director of the Planning Department, led the cheering song of "O, sure victory of Korea!" followed by all the participants with the waving hands in the air. At 10:30 hrs they all started climbing. After passing the ticket office, they reached at the Keumseonsa Temple, then passing the Samo Rock, they took the trail along the Yongbong ridge and finally reached at the Jinkwansa Temple, the final destination of the day. Lunch was waiting for the group of more than two hundred. The visitors of the temple were very happy to see Sunims in strange attires and were busy taking pictures.