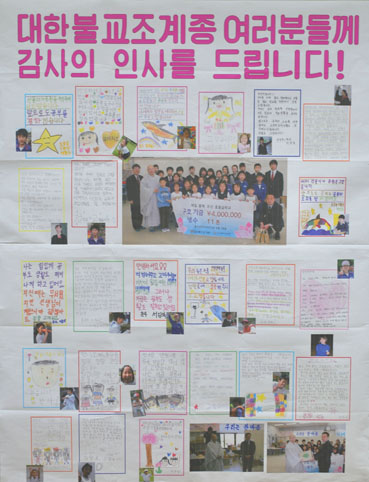 Local students from Japan sent back warm thank you letters in response to Jogye Order’s compassionate support work for the earthquake victims, making it a subtle headline of this month.
A warm letter of thank you was received on 20th of last month from the principal and students of North Eastern Korean School, located in Sendai City, Miyagi, Japan.
In response to the earthquake in North Eastern Japan, the Jogye Order of Korean Buddhism sent an emergency volunteer support group to identify the needs of the victims and subsequently raised the relief funds for the earthquake victims. As a result, the representatives from the Jogye Order visited the North Eastern Korean School on April 28th and delivered 400 Yen (~$50,000) with 11 tons of mineral water named as “A Scent of Mountain and Sweetness of Water.”
The North Eastern Korean School is part of the Jochonghyeon, pro-North Korean residents living in Japan, made up of students with Korean ancestry. The school suffered enormous damage due to the earthquake. However, the school does not receive any support from the government of Japan nor from South Korea.
The letter from the school expresses their grateful heart, shown due to the interest and support by the Jogye order. The letter forwarded by Mr. Yoon Jong Cheol (Principal, North Eastern Korean School) to Ven. Jaseung (President, Jogye Order of Korean Buddhism) states, “The hopes and dreams of our school exist because of the historic visit made by the Jogye Order and the grateful helping hands provided by our ancestral nation,” and added, “We are forever grateful for the support received from Koreans and the bright path Jogye Order is creating for our school.”
In addition, 26 students from the elementary and middle school sent a bright hand-written poster to show their gratitude to the Jogye Order. The short  letter from the students synonymously states, “We are very grateful for the encouragement received from the Jogye Order,” and added, “We will focus on our studies.”
The representative from the Jogye Order responded, “We will continue to show our interest and support, so the school will recover swiftly.” and said, “Our affirmative support will continue so that it will reduce discriminations from Japan and the learning environments of the Korean schools will improve in Japan.”
Meanwhile, the Ven. Jaseung will lead the Jogye Order delegation’s visit to Japan, which will take place between July 7 and 9. During this visit a memorial service for the victims of the earthquake will be performed to pray for the sprits will pass on to a better realm. The team will revisit North Eastern Korean School on the 8th to deliver additional funds (for restoration work) and to comfort the faculty members and students.