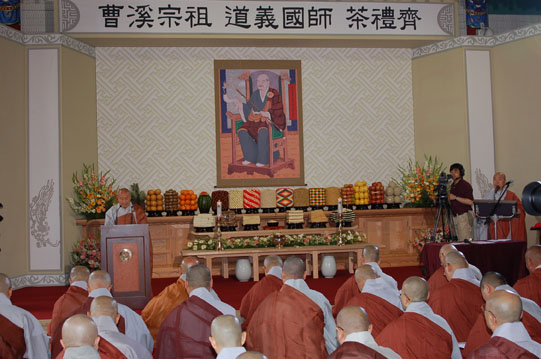 This year sees the third of its ceremony.

’Memorial Ceremony for Seon Master Doui, founder of the Jogye Order’ was carried out at the dharma hall of the Jogyesa Temple on Sunday the 28th May at 10am. In the Service, members of the Council of Elders, including the Most Ven. Hyejeong, the Most Ven. Hwalan and the Most Ven. Dongchun, and President Jikwan and also 5 hundred of the four-fold assembly took part.

The memorial service, presided over by Jeongman Sunim, director of financial affairs Dept. of the Administrative Headquarters and conducted by Semin Sunim, Beopju Sunim and Myeonggwan Sunim, started with Buddha-giving Service carrying out the six dharma offering, the Great Dharani chanting, Imploring the Triads of Buddhas and Bodhisattvas (Geobul), Sadalani(Four matras for the safety of offerings presented to Buddhas), and praying.

Beopdeung Sunim, Chairman of the Central Council, after reading Seon Master Doui’s lifetime records, said, "We cannot but credit the founder of the Jogye Order, Doui Master with the fact that today’s Korean Buddhism has become the basis of the Patriarch Seon and the Jogye Order has been passed on constantly until today, inheriting the authentic lineage of the Order. So I pray, through this memorial service remembering his lifetime contribution, a great momentum will arise in return for all the Buddhists’ wishes to restore the Korean Buddhism."

His excellence Beopjeon, the Jogye Order’s Supreme Patriarch granted Dharma words, on behalf of whom the Most Ven. Hyejeong, chairman of the Order’s committee of law affairs read his message as follows;

Clouds cleared away, one thousand mountains are green
Flowers blossom, all the woods smell sweet
Buddha lies in your own mind
Yet people seeking him outside
Though cherishing a great treasure
Spending away lifetime not realizing it

President, Jikwan Sunim said at the ceremony, "The National preceptor contributed to our Order and our nation’s spiritual history so much that our followers should succeed to his noble idea and make it into a tree deep-rooted in human being and a spring without running out." and continued to deliver his memorial intent, "Today we followers, with our hands pressed in prayer, offering clean teas with our sincere devotion, and cherishing your memory of pious acts, eagerly wish your compassionate protection and providence for our Order’s future."

The memorial service in honor of the National Preceptor Doui, after the Buddha-giving Service, followed the procedure of introducing his lifetime records by Beopdeung Sunim, chairman of Central Council, paying a tribute to his memory by President Jikwan Sunim, granting Dharma words by the Most Ven. Boseong, Vice-chairperson of Elders Council, and Tea ceremony for founder of the Order, Imploring the Triads of Buddhas and Bodhisattvas(Geobul), invocation of the spirit, Mantra for imploring Buddhas to sit down and attend this ceremony, Chant for offering tea, flower offering, Additional Sadalani, Four Vows.