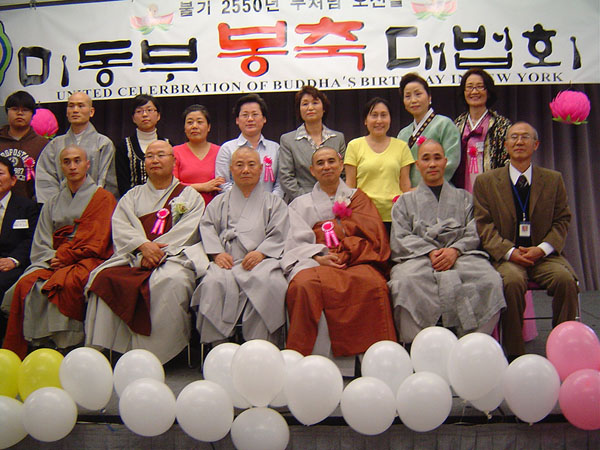 The Sangha Association of Korean American Sangha in East Coast (President Dobum Sunim from Munsusa Temple at Wakefield, MA) held its annual meeting to celebrate the birthday of Sakyamuni Buddha at Queens College in New York on May 21.

Korean Sunims representing 22 eastern American temples and about 800 lay Buddhists from the states of Massachusetts, New York and Pennsylvania attended the celebration ceremony. This year’s celebration was unique because the entire meeting was planned, organized, implemented and controlled by the Preparation Committee whose members were the lay Buddhist representatives living in eastern USA.

The meeting began with celebration music performed by the choruses of Bulkwang Seon Center and Hanmauum Seon Center, and folk music sung by Myongok Lee. Ven. Gikwang Sunim (Wongaksa Temple in New York, NY) initiated the Buddhist ceremonial services: Sounding the Buddhist bell, offering incense, followed by recitation of the name of Sakyamuni Buddha and Heart sutra.
The main assembly for worship started with the Three Refugees. The President, Rev. Dobum Sunim emphasized the law of cause and effect in Samsāra by giving the real examples of assassination of former American Presidents, Abraham Lincoln and John Kennedy, and other involved people. He urged Korean American Buddhists to understand the law of cause and effect with respect to other cultures in America while Korean Buddhists respect the life of sentient beings and practice six Paramitas daily. He said: “When we change our thoughts, we can change the world.” See the attached offering remarks of Dobum Sunim.
Ambassador Bongju Moon (Korean Consulate General of Republic of Korea in New York), President Gyeongro Lee (Korean Elderly Association in New York) and Chairman Jongseong Park (The Event Preparation Committee) offered their celebration speeches. The highlight of the event was the dharma talk by the invited dharma teacher, The Most Venerable Hyechang Sunim, the former abbot of Jikji Sa Temple.

He said to the assembled Buddhists that we try to cling to the Buddha instead of performing our daily practice and diligence. He reminded the assembly that the Buddha insisted on one vehicle Buddhism and the equality of humanity without discriminating people based on the classes and castes of society. He maintained that the traditional cultures of Buddhism should be preserved even in the modern society and that Buddhism is one of alternatives in solving our suffering in this world. He said that happiness can not be found outside us and can be found only inside us. He believes that the Buddha gave the dharma talks on Four Noble Truths, Noble eightfold Path and Three Studies for the happiness of human beings. The Buddha clearly demonstrated Nirvana in this life by abandoning the causes of suffering: greed, hatred and ignorance. The Most Venerable Hyechang Sunim mixed his dharma talks with the popular songs of Korean pop singers and interesting jokes about marriage. He said to the audience, “people get married due to the lack of judgment power, get divorced due to the lack of patience, and re-marry due to the lack of memory power.” The four-fold assembly burst into laughter and gave enthusiastic applauses. According to the teachings of Patriarchs, it is easy for us to attain the supreme enlightenment if one can empty the discriminating mind of love and hatred. Once we have empty mind, then we can have a balanced life (not biased life), which in turn gives us happy life.

The President Dobum Sunim offered the praising remarks that this years’ event was a quite success due to the great efforts of Preparation Committee. He gave the appreciation plaque to its chairman, Jongseong Park, at the end of ceremony.