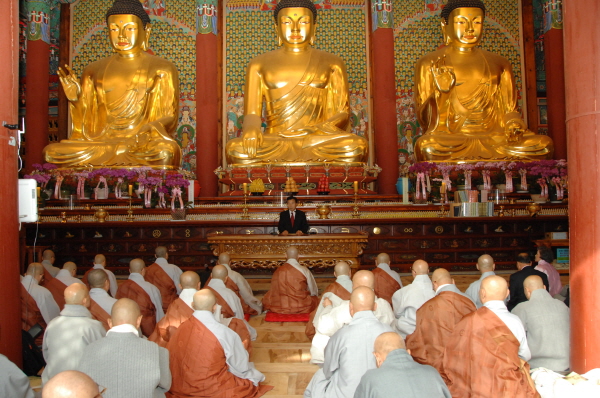 October 27 marks the 30-year anniversary of the government’s illegal actions against the Buddhist community. Now, the Buddhist community demands the truth to be revealed, the restoration of honor for the victims, and compensation for victims. To commemorate the 30-year anniversary, there was a dharma service and a meeting of the victims at Jogyesa Temple on October 27.
During the service, Ven. Jaseung said, “The October 27 incident is an example of the government using illegal violence against the Buddhist community ignoring laws that protect freedom, prohibition against discrimination, and the separation of state and religion; and which destroys the government structure.” He continued, “Regarding this incident, the truth must be revealed, the honor of the victims must be restored, and compensation for the victims must be paid. In addition, the law, which was forfeited, must be restored to its original standing.” 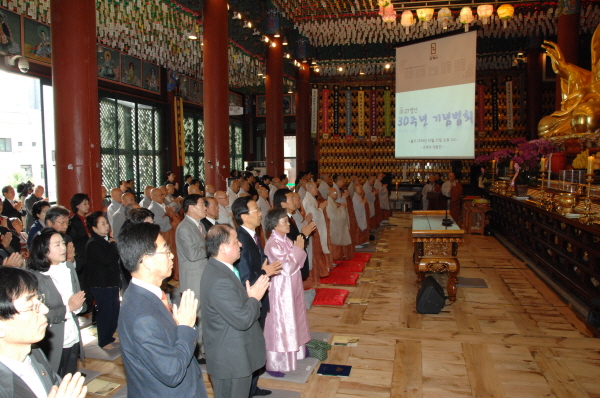 Ven. Jaseung continued, “The government must acknowledge past mistakes, repent, and apologize and make efforts for such incidents to never occur again. This will form the basis for national unity.”
Ven. Beopta representing the victims said, “The new governmental military power, wanting to usurp the power of the people, stormed Korean temples, first in the early morning of October 27 and then again on October 30. The dharma halls were trampled on by soldier boots.” He continued, “The government must repent sincerely, and the Jogye Order must make efforts to prepare a place to educate the posterity on historical facts, heal the hurt of the victims, and restore the honor of the victims. 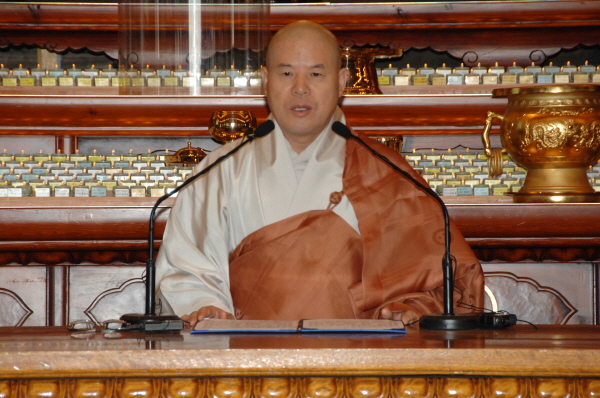 Representative Son Hak-gyu from the Democratic Party expressed his sympathy and said that the government will do their best to support the requests of the Buddhist community from both parties.
Mr. Son said, “We express our sincere condolences to the monastics and the Buddhist community for the defamation and hardships incurred due to the illegal governmental actions. As a politician, I feel very sorry for the defamation and hardships incurred by a religious group, regardless of time and perpetrator. I feel the great responsibility of the government. We will do our best to restore the honor of the victims and prepare policies for laws to be passed in this regard.”
The Director of the Committee for the Restoration of Honor for Victims of the Oct. 27 Incident, Ven. Yeongdam said, “Our committee understands the gravity of our role in planning the restoration of honor for the victims. We will do our best to compensate medical costs for the monastic victims and construction of the History Education Center.” Ven. Yeongdam added that the committee will pursue the three requests of revealing the truth, restoration of honor, and compensation for victims.
In the meeting with the victims, Ven. Yeongdam said, “The truth must be revealed in exactness and the restoration of honor must be carried out. There is no restoration of honor without compensation.”
The dharma service was attended by the head of the Jogye Order Ven. Jaseung, member of the council of elders Ven. Myeongseon, Doseonsa Temple Presiding Director Ven. Hyeseong, Director of the Bureau of Education Ven. Hyeoneung, Director of the Bureau of Dharma Propagation Ven. Hyechong, Dongguk University head of the seminary Ven. Beopta, President of Jogye Order Laity Association Kim Eui-jeong as well as high-ranking government officials.
What is the October 27 Incident?
New Military Government Search Temples and Takes Away Monks and Nuns
On October 27, 1980, the Korean Government illegally searched Buddhist temples and forcibly hauled away monks and nuns. This is the first time the Buddhist community was singly sought out and oppressed in modern Korean history. The government, which has newly seized power, as a “purification movement” searched 5731 temples and took away 1929 Buddhists to be interrogated. After the incident, there were distorted and exaggerated reports, and various false rumors circulated to cause immense damage to the Buddhist community. By these severe actions of the government, the human rights of numerous monks and nuns were violated, which led to a dramatic decrease in the number of Buddhist faithful as well as the Buddhist community losing social authority. Accordingly, the October 27 Incident is an abuse of government authority, which was a violation of religious freedom and human rights.