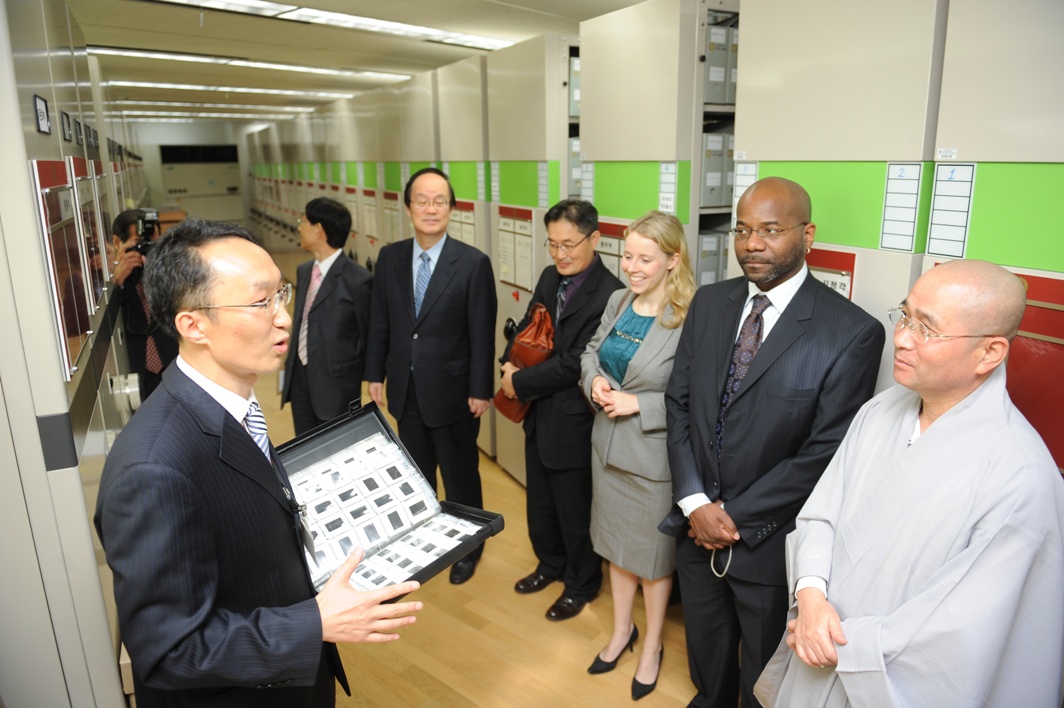 World archival experts visited the Jogye Order Archives at the administration building on October 15. Professor Anne Jillian from UCLA’s Archival Studies Department, Helen Sweneton, researcher from Englands’ HSCB Bank Archives, Peter Blum, director of the Heidelberg Archives, and other specialists visited to tour the Jogye Order Archives. They also had lunch at Baru (Jogye Order restaurant) followed by a PowerPoint presentation on the Jogye Order Archives.
The Jogye Order Archives began organizing records in 2000 to store Korean Buddhist and Jogye Order records using modern archival methods. The archives officially opened its doors in 2004 and now have plans to expand the archives to include firstly the 24 district head temples and eventually all of the more than 2500 Jogye Order temples. The Jogye Order archives use modern equipment to store and organize its records and artifacts such as the temperature maintainer, which keeps the storage rooms always at a moderate temperature and dry. The archives also employ professional archivists to organize and manage the system. Professor Jillian commented how impressive the archives were, especially for a religious organization.
Korea has historically kept very good records in a traditional manner such as the 84,000 wood panels of the Buddhist canon at Haeinsa Temple, which is one of several Korean record artifacts that are UNESCO designated world cultural artifacts. However, modern record keeping is relatively new and the Jogye Order is on the forefront of the new archival systems. Korea has now rapidly adopted the modern archival methods in the fields of government, commerce, private sectors, and religion. The Jogye Order has a sound beginning in this field and plans to expand and improve the archival system to preserve Korean Buddhist culture and Jogye Order history.
These world archival experts are in Korea for a two-day conference on Archival Studies at Hankuk University of Foreign Studies.