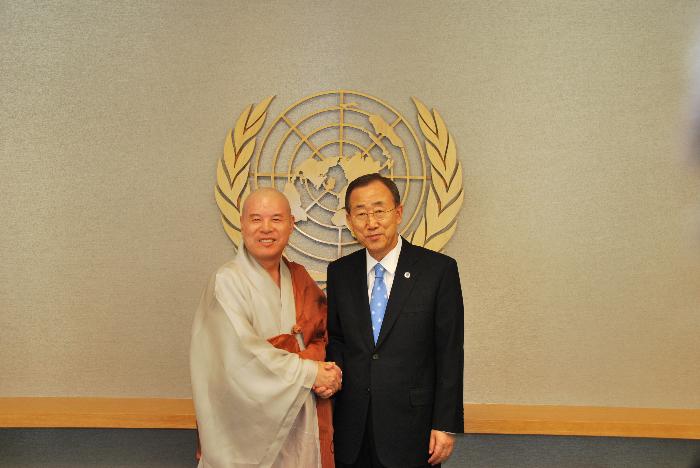 Jogye Order President Ven. Jaseung visited UN Secretary General Ban Ki-mun at the UN headquarters in New York to discuss world peace. Secretary Ban said, “I’m happy that you have come to to plan good works in relation to Korean Buddhism. I’m grateful for the great contribution to world peace and unity by the Korean Buddhist community.” Ven. Jaseung said to the Secretary General, “I was happy and proud to hear of your efforts in international relief and world peace. The Jogye Order has great interest in these two fields.” Ven. Jaseung also requested the UN’s continued consideration in these pursuits.

Secretary Ban also discussed his connection to Buddhism in the meeting, which lasted over 30 minutes. He said his mother prays constantly and he himself went to Beopjusa Temple to study for his examination. 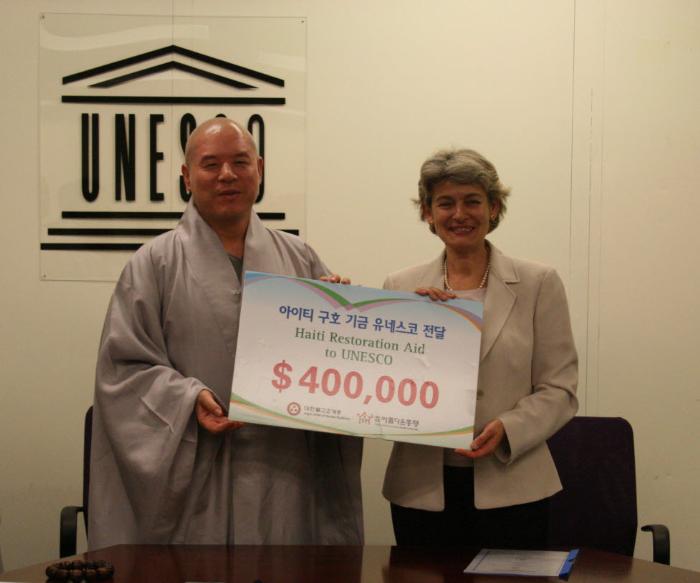 Ven. Jaseung also visited UNESCO Director General Irina Bokova at UNESCO in Manhattan, New York on September 20 to hold an agreement ceremony of an accord on protecting children in impoverished nations. The Jogye Order and UNESCO agreed to continue cooperation in the promotion of world peace and the cultural development of impoverished nations. The details will be followed up by the UNESCO Korea Committee and the Jogye Order Department of Social Affairs. On this day, Ven. Jaseung presented UNESCO a donation of $400,000 USD for relief aid in .

Ven. Jaseung said, “We had various approaches to help such as building a school, but we made the donation to UNESCO because we thought it was a more effective use of the money. Irina Bokova said, “Giving directly this donation to UNESCO is a sign of the trust you have in UNESCO. We will use this money for the children with humble and diligent service. We will also let the government know of this contribution. I’m very grateful for this symbol of philanthropy.”

A dharma service was held at Flushing, New York with over 1000 in attendance on September 19. This was sponsored by the Korean American Sangha Association and the New York Korean Temples Association. 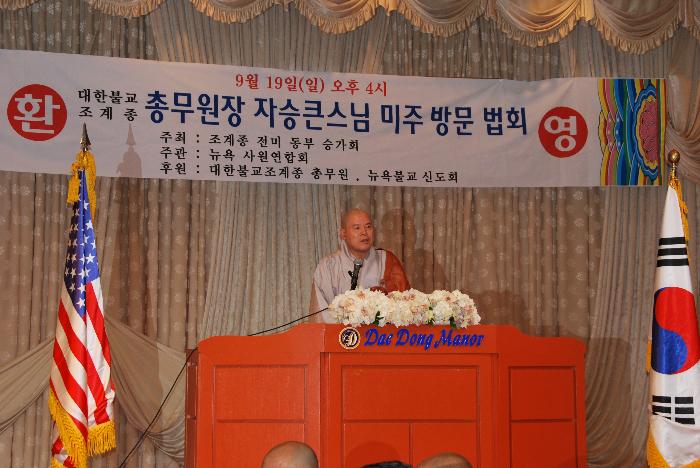 Ven. Jaseung said in his dharma talk, “Buddhism is a faith and teaching to tame the mind. More powerful than a Roman soldier’s sword is the faith of Koreans. A Buddhist is one who believes, follows, and carries out the Buddha’s teachings.” Ven. Jaseung also gave out gifts during the service. There were over 20 ovations during the service.

Ven. Jaseung visited Columbia University for a meeting with professors and students from the department of East Asian Studies on September 20. Ven. Jaseung also toured the campus.

The professors said that they will do their best to assist in promulgating Korean Buddhism within American society and academia. They also wished for American students go to and study at the Jogye Order.