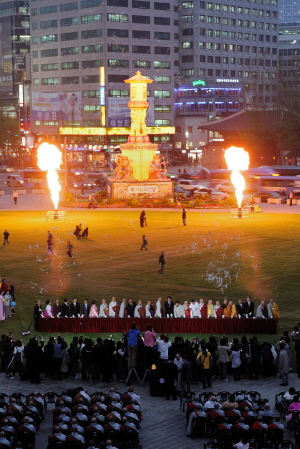 The annual Lamp Lighting Ceremony was held at Seoul Plaza on April 3. This year’s grand lantern is a replica of the twin-lion stone lamp at Beopjusa Temple . This ceremony ushers in the season of the Lotus Lantern Festival, which celebrates the birth of the Buddha. The lanterns are lit in hope that the light of wisdom and compassion will dispel the darkness of ignorance and suffering. These lamps are also an offering to the Buddha for the benefit of all beings.

Ven. Jaseung, who is the head of the Festival Planning Committee said, “We will do our best to contribute to the Korean people’s peace and happiness as we prepare for the Buddha’s Birthday celebrations. In commemoration of Buddha’s birth on May 21, for the sake of suffering beings, we will try to emulate the life of Buddha who gave his entire life for the sake of others.” He also said, “We will do our best to create a world of mutual understanding and cooperation, which transcends the walls of conflicts based on class, ideology, and area—to help our neighbors in need of our compassionate hand.” He added, “We Buddhist must do all we can for the peaceful unification (of the ) and the decrease of conflict and confrontation between the North and South.” 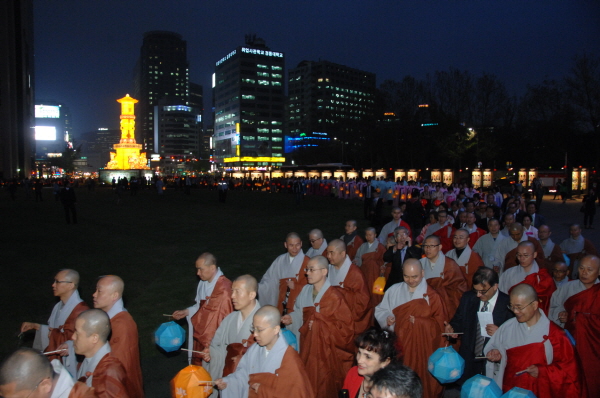 This grand lantern is 17 meters tall (pedestal two meters long) and made with hanji (traditional Korean paper). The beauty and craftsmanship of this lantern indicate the advanced development of lantern making artisanship. This lamp will be lit until May 21. At the base, there are the Four Guardian Kings also made in the traditional lantern style. 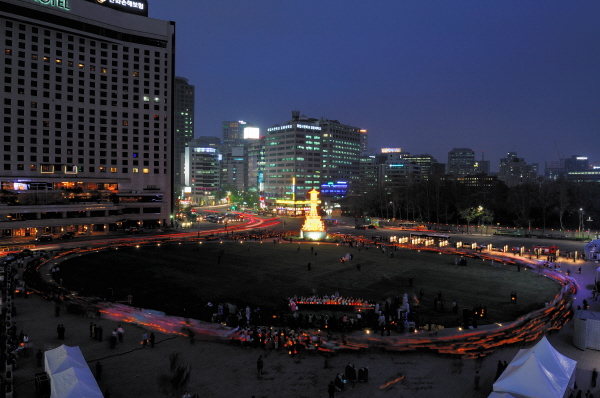 On this evening, special guests from the marginalized areas of our community and representatives from numerous embassies also attended the ceremony.

During the Lotus Lantern festivities, there will be over 50,000 lanterns adorning the streets of the Seoul area, including the Cheongyecheon Stream. Prayers for the victims of the Korean Navy ship that was sunk will be hung on the lanterns this year.

Many eminent guests attended this year’s ceremony, including Seoul mayor Oh Se-hun and representatives from all the major Korean Buddhist orders.