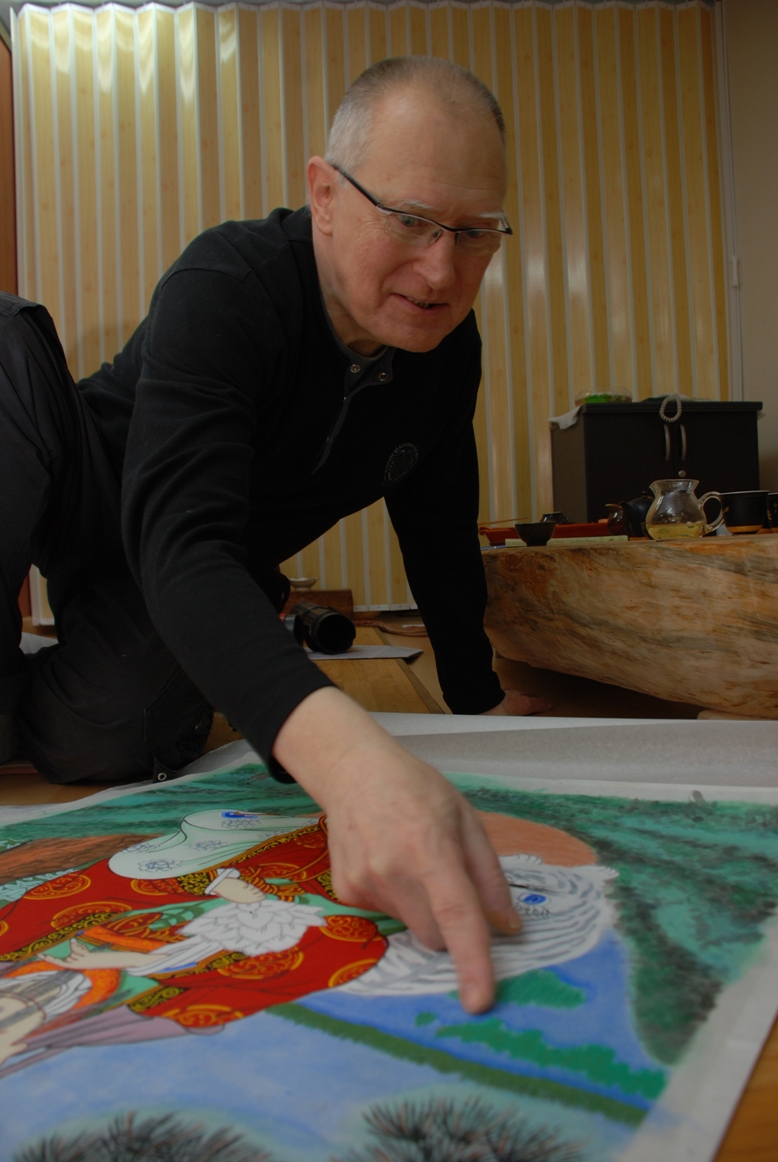 “I came on a whim. Now, it’s been 40 years since I landed in Korea. Ain’t that something?”

“My age? I’m a haebangdung (born around the time when Korea was liberated from Japan). That makes me 66 this year.”

Brian Barry was holding the taenghwa (Buddhist painting) of the mountain god and tiger, which is to be sent to for the Korean Taenghwa exhibition. His Korean, particularly the Jeolla Province accent is flawless. The third generation Irish American, who considers his Korean as the Jeolla Province’s standard Buan speech, was given the responsibility of finishing the work of the late Ven. Mangong, a great taenghwa artist. Barry’s artistic talents are that great.

Not only that, but he has translated a collection of 65 essays of Ven. Beopjeong. This book, “The Sound of Water, the Sound of Wind” was published this past February. Since 1986, he has been painting taenghwas as a form of practice. He has also translated books by Ven. Seongcheol and Ven. Ilta, and contributes to the training of dharma instructors for the Jogye Order. He has become an indispensable treasure of the Korean Buddhist community.

However, his life has not been all smooth. Barry studied political science at Connecticut University . At 33, he came to as a member of the Peace Corp. He first lived in the Byeonsan peninsula in Buan of the North Jeolla Province . After his service of two years in this unfamiliar land, he returned back to U.S. There, he couldn’t concentrate on his job and he kept remembering the face of the Buan boardinghouse lady who cherished him like a son. The strong smell of Korean food or the soulful sound from the folk drums would not go away from his mind. He missed and the Byeonsan peninsula so much, it was like homesickness.

While he was missing , the Peace Corp asked him if he wanted to go back to Korea . Without a second thought, he left. "There was no reason. I just came on a whim. I was going mad wanting to be in Korea.” So he came to a Korea and gradually became more engrossed into the Korean culture.

He settled in Korea, but he was plagued with a practical problem. Although, he taught English and translated, he had economic difficulties. Moreover, he didn’t understand the purpose of life. It was the beginning of his spiritual search, his search into “who am I?”

Barry would often have dreams of sitting in front of Buddha statues. In 1979, while passing by Jogyesa Temple, he was led to the dharma hall as if by an invisible force. He sat down at the end of the hall without thinking of much. He was just sitting there and the dharma hall was also still, when a shadow moved across the door. At that moment, he had an epiphany of sort and thought, “Ah, this is it!” He realized that he could find what he was looking for in Buddhism.

Whether it was the merit of taking refuge in the Buddhadharma, Barry soon got a job with Daewoo. He worked there for more than 20 years. He began to study Buddhism at Daewon Buddhist College in 1980 to find the “true self,” and in 1986 he had an experience that would change the direction of his life.

He was translating for an American architect who came to to study dancheong (Korean architectural decorative painting). He went to Bongwonsa Temple in Seoul and met Ven. Manbong. When he saw Ven. Manbong’s paintings there, his heart almost stopped from shock. Barry had given up an art major for political science due to his father’s opposition. He always had an interest in art, and Ven. Manbong’s taenghwas became the catalyst for reviving his forgotten passion for art.

That day, Ven. Manbong told Barry that he could come to the art studio. From the next day on, he visited the studio everyday. However, learning to paint taenghwas was not an easy process. In order to become Ven. Manbong’s apprentice, Barry had to draw taenghwa drafts of the ten kings 3000 times. It was so difficult, he left several times. However, each time he came back. Within two years, he finished the 3000 drafts to officially become Ven. Manbong’s apprentice.

Drawing taenghwas was merely a way of practice. The paint must be applied repeatedly over the draft for a lively and deep color to appear. Likewise there are many bodhisattvas and children that appear in taeghwas. To think that it takes two months to create a taenghwa 1.5 meters by 1.5 meters, it is difficult to imagine that anyone other than a practitioner could create such a work.

There have been many funny incidents because a western taenghwa master has a heavy Jeolla Province accent. In 1999, Barry was interviewed by CNN because he was drawing a taenghwa at the request of the Thai royal family temple. During the interview he used the Jeolla Province word, “geoshigi” (meaning “whatchamacallit”) so many times that his brother from the seeing the interview, thought “geoshigi” was the name of the temple. Barry has been recognized for his talents enough to be responsible for finishing the work of the late Ven. Mangong, but he sometimes daringly goes against tradition. For example, once, he gave blue eyes to the Mountain god and tiger. It could be because 90% Lithuanians have blue eyes. Beside this, there is another reason how he has become a treasure of . He has greatly contributed to spreading Korean Buddhism to the world. 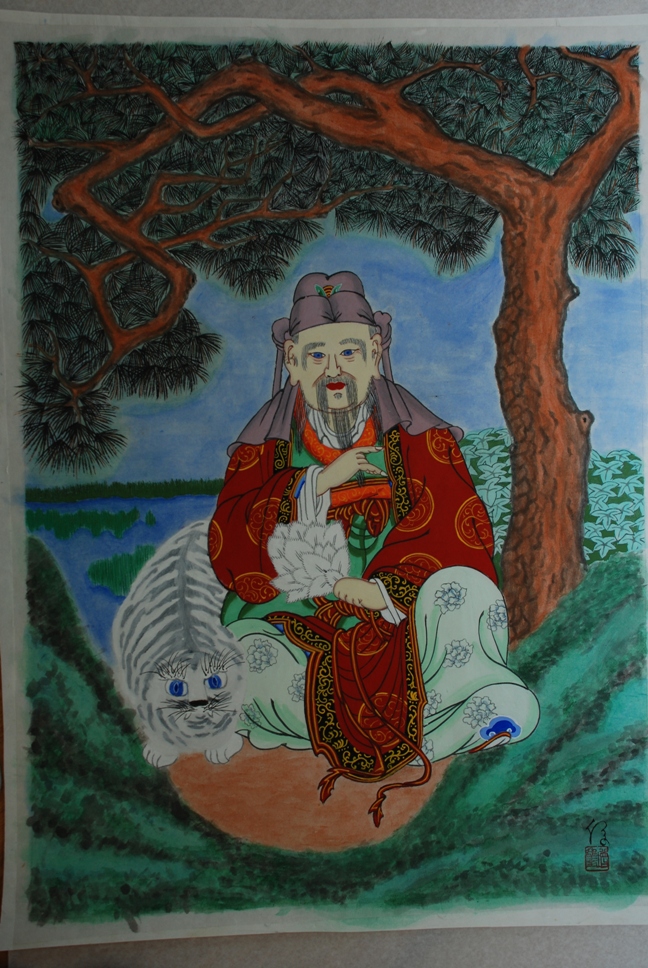 He received his dharma name of Dohae (Ocean Path) from Ven. Gwangdeok. He became the first western International Dharma Instructor of the Jogye Order in 1987. Thereby, he contributed to the creation of the Lotus Lantern International Buddhist Center . These connections led to other opportunities such as translating writings of the great Seon Master Seongcheol into two books, “Echoes from Mt. Kaya ” and “Opening the Eye.” In 2009, Barry also translated and freely distributed “Everyday Korean Buddhist Pratices” by Seon Master Ilta. He also finished a translation of a collection of essays by the beloved monk Ven. Beopjeong in 2003. Ven. Beopjeong passed away before writing the forward. The book was finally published in February after a long search for a publisher.

Barry has translated 40 books into English on Korean Buddhist art. In such ways, he has contributed greatly in the international promulgation of Korean Buddhist culture and Korean culture in general. For this, he received an award from Korea’s Ministry of Culture, Sports, and Tourism.

Then in 2001, Barry faced his greatest challenge. He had cancer in the kidneys and lungs. However, he never thought of the cancer as a disease, even through the four operations. He turned to the Buddha and considered the healing process as a practice. He gave up marriage because he was afraid he might not be able to paint taenghwas. Painting taenghwas was not merely a job, but a practice. That’s why he could have done it.

So Barry came on a whim and the curiosity to find the true self arose. He saw the shadow on the door to experience an epiphany. Finally, he found himself in his taenghwa art. To Brian Barry, not only is taenghwa painting a practice, but so is eating, sleeping, and being sick.