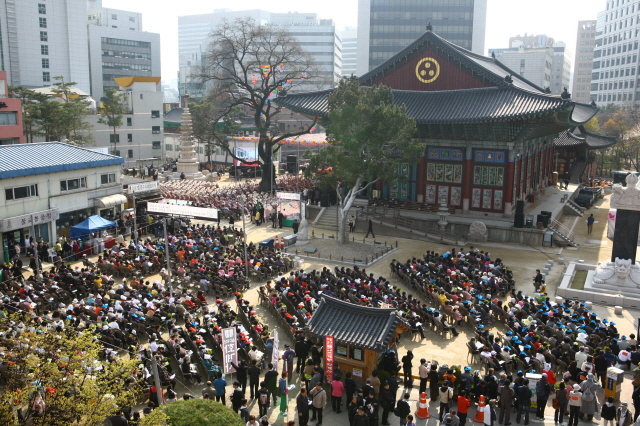 Ten thousand Buddhists rally to oppose the government’s development of the four great rivers. Prayers were offered for the peace of living beings, and the importance of the preservation of life and nature was emphasized. The sincerity of the Buddhist faithful could be felt as they bowed to the beat of the moktak (wooden clapper). The thought of the diverse living beings that were lost due to the development must have been in the minds those bowing before the Buddha. Other important points were: for humans to live together in harmony with nature and that peace and life should be preserved.

This day’s event was called “Dharma Service for the Life of All Beings.” The program began with offering the four great rivers (Han, Nakdong, Geum, Yeongsan) to the Buddha, and then the former Director of the Bureau of Education Ven. Cheonghwa recited a prepared statement. The rest of program was as follows: the chairperson of the Jogye Order Central Council Ven. Boseon’s speech, prayer and memorial ceremony, Buddhist student choir, a performance from singer An Chihwan, and the reading of the declaration statement. Over 1000 monks and nuns and over 10,000 lay people attended. 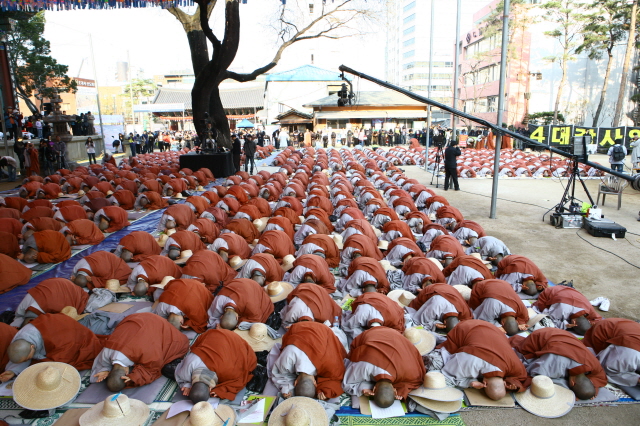 The main sentiment from the event was to let the rivers flow as they are naturally. In addition, the problems with the current development were pointed out. Ven. Cheonghwa said in his speech, “Rivers must remain as a place of rest that is ever attractive, warm, open, and comfortable.”

Ven. Boseon said, “We don’t hear the cry of living beings because we have become deaf and blind due to our material comfort and abundance. I pray that the beautiful sound of spring would ring forth on time from all the bends and turns of the four great rivers, which are the streams of life.”

The leader of this movement is Ven. Sukyeong, the representative of the Buddhist Environment Solidarity. He called the development “terrorism of the homeland and nature.” He said, “The development of the four great rivers is in a category of its own even when compared to the ecosystem disturbances and destruction of nature that we have seen. If the Buddhist community doesn’t do anything, we are going against the teachings of the Buddha.” 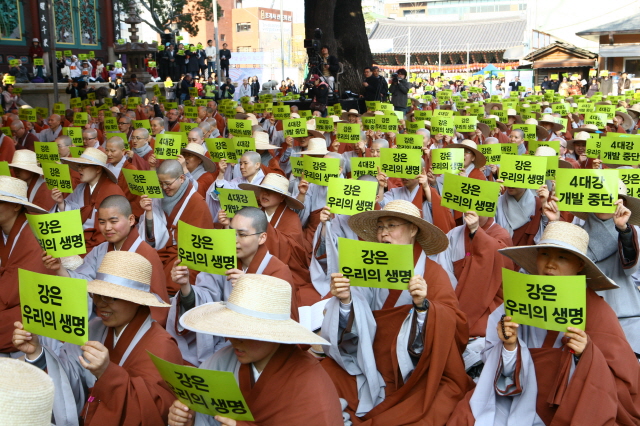 More than 10,000 Buddhists came together to urge the cessation of the development of the four rivers. The following are resolutions to live together and preserve life:

l        Absolutist government policies, which ignore the sincere appeals of the people and endanger nature and life of the citizens must stop

l        At the dharma centers, provide information on the problems created by the government development and collect signatures for petitions