North Korea’s national treasure-level cultural assets will be shown here for the first time since the Korean peninsular was divided by two Koreas. Among them were the great Seon master Naong Sunim’s cane, Gwaneumsa Temple‘s seated statues of Avalokitesvara, Bodhisattva of Compassion, and the gilt-bronze pagoda which was found in the five-story stone pogoda of Burilsa Temple.

The exhibition on North Korea’s National Treasure-level cultural assets will be held from June 10 as the first interchange event with the North Korea’s Choseon Central History Museum(director, Kim Song-hyun).

This special exhibition will present some 90 significant cultural treasures that are from the Pre-historic Era to the Joseon Dynasty. Especially, about 20 artifacts such as the cane of Seon master Naong Sunim(1320-1376) who was a teacher to King Gongmin in Goryeo Dynasty are drawing attentions because nothing about them has ever been opened to the public so far.

Major items also to be displayed: the bronze statue of Taejo Wang Geon(the founder of Goryeo Dynasty) excavated in 1993 at his mausoleum in Gaeseong, the incense bawl from Shingyesa Temple, antiquities from the Bronze Age such as bronze swords discovered in Shinam-ri, North Pyeongan Province and presumably Korea’s oldest musical instrument bone flute excavated in Seopo Port.
In a painting sector we can see Shim Sa-jeong’s ’Hwajodo(Bird and Flower Painting)’, Kim Hong-do’s ’Sinseondo(Picture of a Taoist hermit)’, Shin Yun-bok’s ‘Sonamu(A Pine Tree)’ and ’Ongchon Padodo, a painting depicting waves in Ongchon by Jeong Seon from Joseon Kingdom.

Yi Kun-moo, director of the museum, said "Most of the exhibits have never been introduced to people in the South. We are going to visit the North before the exhibition to assort and to investigate these cultural treasures" 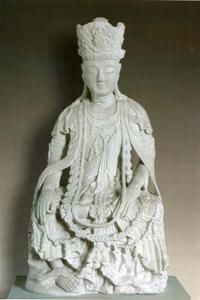 The seated statue of Avalokitesvara-120cm in height
One of the two seated statues of Avalokitesvara, Bodhisattva of Compassion, from the cave of Gwaneumsa Temple, Gaeseong, Hwanghaebuk-do Province, North Korea. The body of the statue looks well balanced and gorgeous with very delicate carving skills.