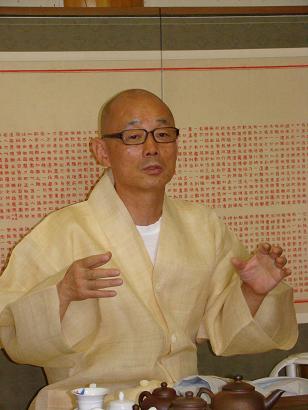 “Everyday has been a little nerve-wracking trying to keep the promise of the 1000-day prayer retreat. However, now, I’m a little sad that it’s coming to an end. I will endeavor to finish my duties as an abbot with a prayerful heart,” said Abott Ven. Myeongjin.

On December 5, 2006, Ven. Myeongjin began the 1000 days of prayer. It will end on August 30, 2009. Except for attending the funeral of former President Roh Mu-hyun on May 29, 2009, Ven. Myeongjin did not leave Bongeunsa temple. He offered 1000 bows everyday to make BongeunsaTemple a place of genuine practice.

Ven. Myeongjin said, “To keep this promise with Bongensa Temple members as well as Korean Buddhists, I would often set two alarm clocks on the days I went to bed late. There has not been a single day that has passed in leisure.” He continued, “There were times of distress, but with the faith and support of the faithful I will finish in good shape.”

Within the 1000 days of prayer, there were noticeable changes at BongensaTemple. All financial records have been made available to the public, making for transparent accounting. Members of the laity attended important temple meetings. The number of Bongeunsa faithful increased as did the temple income. In 2006, there were 200,000 faithful members of BongeunsaTemple. Currently, there are 250,000 members. In 2006, the fund was 8.6 billion wons (US $7 million). There’s been an increase of 20% each year. Now, the fund is at 12.2 billion wons (US $10 million).

There were some events, which the abbot wanted to attend like the candlelight vigils and the Yongsan incident. He did finally exit BongeunsaTemple to attend the historic funeral of former President Roh Mu-hyun. The former First Lady, Kwon Yang-sook is also a member of BoneunsaTemple.

Ven. Myeongjin plans to have a Dharma service on the morning of August 30 for an official end to the 1000-day prayer retreat. He plans to take the 1000 sacks of rice that has been collected for underprivileged children in the “1000 bags of compassionate rice” campaign to Gangnam District and Gyeongi Provice Departments of Education. He will also visit Yongsan to console the bereaved of the Yongsan incident. He also plans to do a two-month retreat at YonghwaMeditationTemple. He said, “I want to use the energy from the 1000 days of prayer for meditative introspection. It’s something I decided to do a long time ago.”