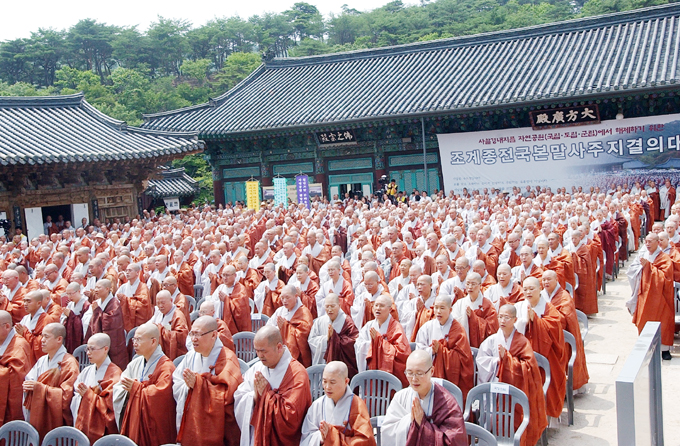 Over 1500 Jogye Order Abbots and other monastics met at Tongdosa Temple to discuss seeking greater autonomy for temples on national park land on July 2. In the middle of the July heat over 2000 (over 1500 monks and nuns) met in type of a rally to seek the lifting of restrictions on temples that reside on government land. The sentiment of this meeting was that the government has been very restrictive and even abusive for the past several decades. The Jogye Order abbots want the temples to be separated from national park land, so that hikers and visitors do not use the temples like a rest area or amusement place. They use the words of the great late Seon master Songchol:

The abbots also want the building restrictions lifted, so that new constructions can proceed. The head of the Jogye Order Ven. Jikwan said:

“The temple is a place where Lord Buddha resides. Not only is it a place of meditation for monks and nuns, but it is a place for Buddhists to practice. It has pained me to see some people treat the temples as an ordinary place due to a lack of understanding. It’s difficult to express the great sorrow in not being able to fulfill the functions and original purpose of temples due to the numerous government restrictions. There is a need to unify the laws from the various government departments.”

The following resolutions were developed at the meeting:

l        Education on these issues at individual temples