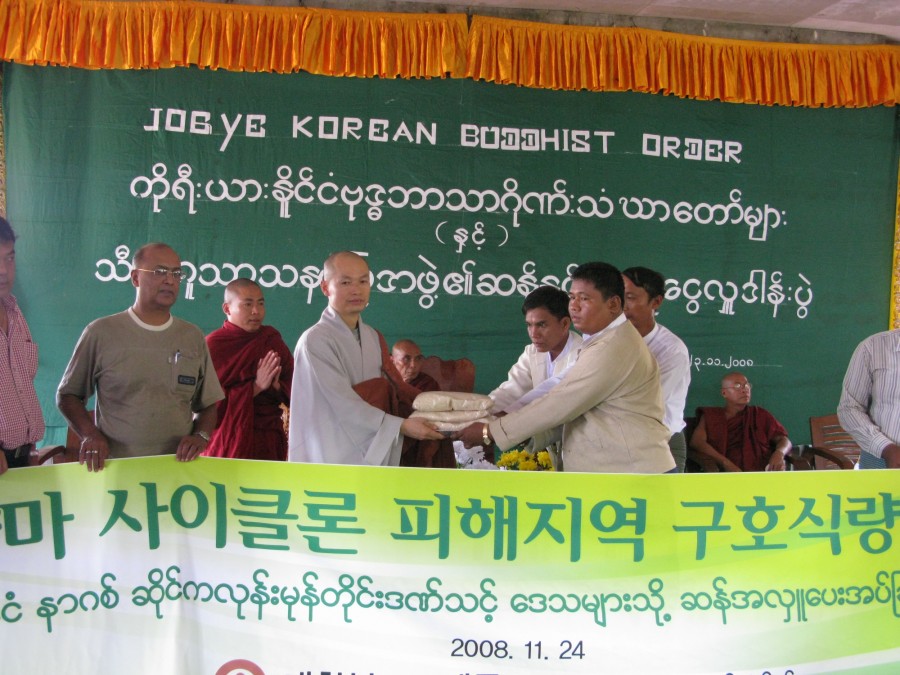 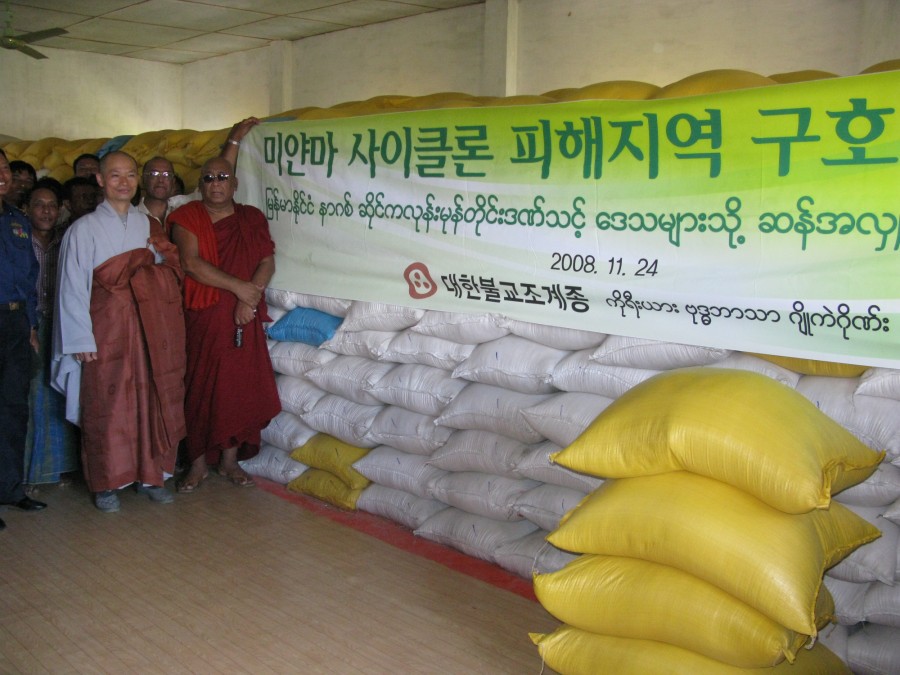 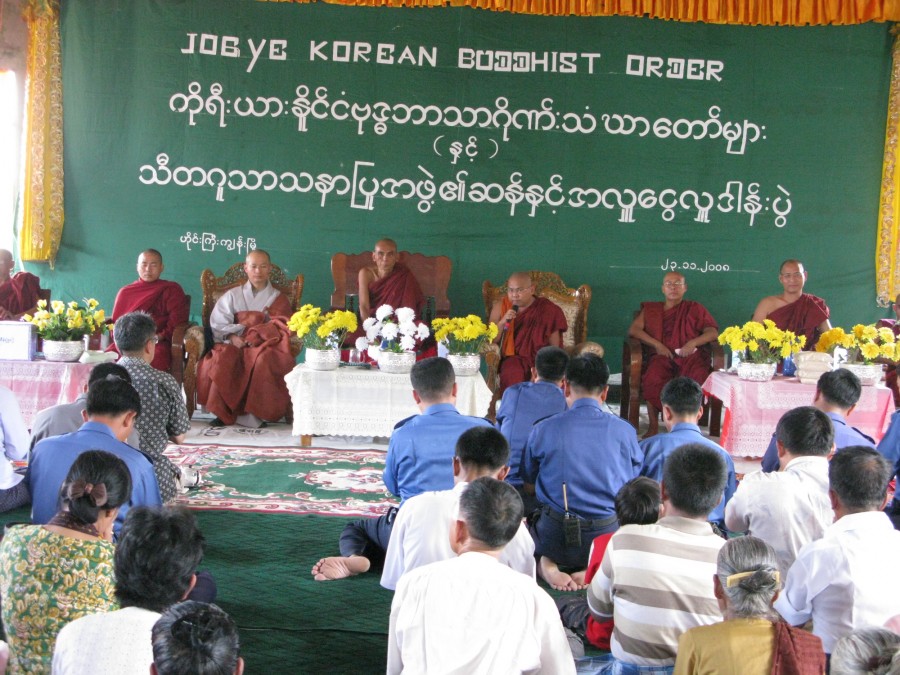 Representatives from the Jogye Order of Korean Buddhism visited Yangon, to survey the disaster area of Irrawaddy and offer 3000 bags of rice as relief aid.

“We came to offer the sympathy of Korean Buddhists.”

Ven. Jakyung, from Jogye Order’s Department of Social Affairs, was in Yangon, from November 20 to 26 in order to survey the disaster area of Irrawaddy , which had been devastated by cyclone.  He offered $40,000 (USD) of rice as relief aid on behalf of Korean Buddhists.  He also offered $10,000 (USD) as seed money for the building of schools and a hospital to be supported by the Jogye Order.

The effects of the cyclone “Nargis” are still clearly visible on the Irrawaddy Delta.  This cyclone caused more than 146,000 deaths and $10 billion (USD) in destruction.  It is considered the worst natural disaster in history.  The trees were leaning toward one side, and the houses could merely fend off the rain.  Most of the schools have suffered severe damage.

The houses had make-shift roofs made from wooden planks that seems to flimsy to withstand even a strong wind.  The schools were left in desolate conditions.  Still, some children were there to study.

The Jogye Order representatives offered the relief aid in a ceremony held at Mahasadama Shodikayama Dharma Center at Hainji Island on November 23.  More than 2000 attended as Jogye Order Head Ven. Jikwan’s address was read by Ven. Jakyung.  “We offer this aid as brother-nations following the same teachings and truth of Lord Buddha.  I hope for a swift recovery from the calamity to return to a peaceful life.”

The Irrawaddy State Religious Representative said, “The local people were aware of the rice offering by the Jogye Order of Korean Buddhism even before today’s ceremony.  The restoration is about 50% completed.  We are very grateful that you have visited this particularly hard-hit area.”

Everywhere the Jogye Order representatives went on the Island of Hainja , people would follow them around enthusiastically.  At the ceremony, the Dharma Center completely overflowed with people.  It was as if the entire population (approx. 1000 households) of the island attended.

“Mingulaba Wandabadey (Hello, nice to meet you).  We come from , a 7-hour plane ride away, to relay the sympathy of Korean Buddhists,” said Ven. Jakyung to the people’s applause.

Jogye Order representatives bought rice with the collection from Korean Buddhists and temples.  They also surveyed the land where the schools and hospital are to be built.

On November 24, the representatives moved to the Jongu area to offer rice.  At this ceremony, more than 10 monks attended.

The 3000 sacks of rice will feed more than 3000 households for two months.  The Jogye Order plans to complete the construction of schools and the hospital in the Yangon and Irrawaddy Delta area.  Seed money of $10,000 (USD) was offered to the Myanmar Sitagu International Buddhist Center . 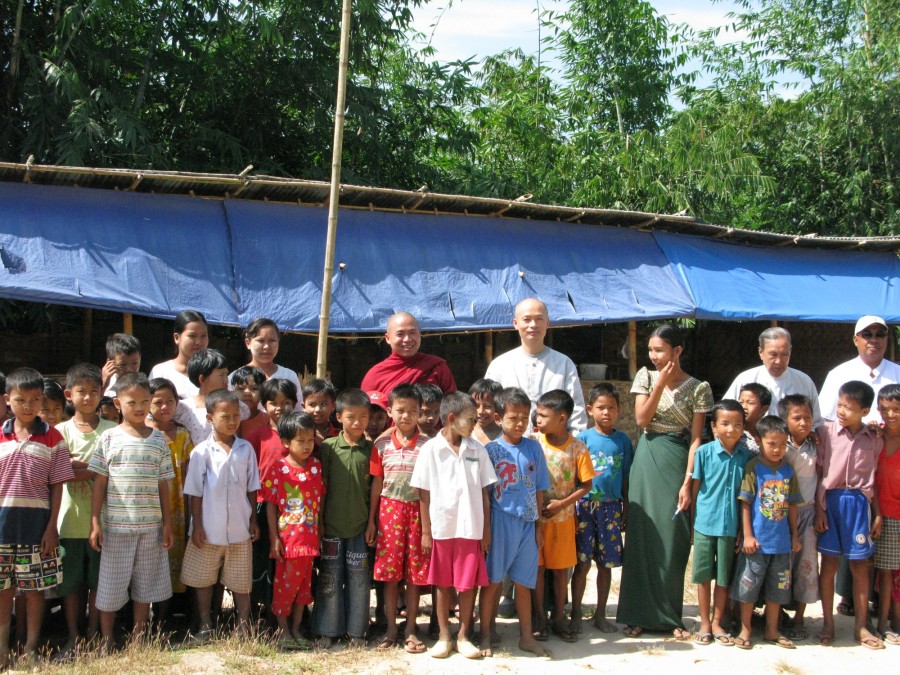