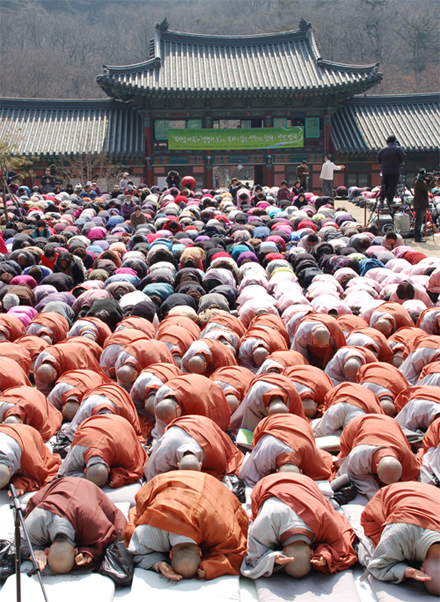 Voices against the Presidential campaign pledge

at the Extensive Penitential Dharma Assembly in Bongam-saTemple

“Let Buddha’s mind and introspection of life-loving eye on the environment take its course” some 2,000 Buddhists, monks and laymen together, raise their voices against the Grand canal plan.

A dharma assembly at Bongam-saTemple in the city of Moonkyung was held at 1 pm on March 7th in order to urge the complete abolishment of the highly controversial Grand Korean Waterway project.

In front of some 2,000 monks and Buddhists, Hamhyun, the abbot of Bongam-saTemple said, “ Bongam-saTemple opened its gate today for the first time, since its historical formation of the Bongam-sa Intensive Practice Community 61 years ago.  Hamhyun explained that the purpose of this rally at Bongam-saTemple , a spiritual and symbolic place of Dharma truth, was to change the absurdity of the grand canal project with the wisdom of an environment-friendly way; the course of the grand canal project would severely damage the whole country as well as her nature and ecology.  In their encouragement speeches, Beopdeung sunim, the Executive Director of the Precepts Adjudication Council in JOKB and Jeong-Kwang sunim, the Director of Taego Spiritual Center founded by the JOKB said, “The new government should listen to the sincere heartfelt warnings from the religious communities and it should completely withdraw the idea of constructing the Grand canal which will eventually damage the country.” “We all do honor and respect those religious groups on their walking protests until they accomplish their goal to stop the mass construction project,” said the two Masters.

“The construction of the Grand canal is to destroy the Land of Buddha ,” said Weol-Ju sunim.

At the assembly, the ex-Director of General Affairs of JOKB, Master Weol-Ju gave his dharma sermon as follows:

“No matter how hard I think about this project, it is definitely wrong to pursue.  The Grand Korean Waterway plan will most surely destroy our surroundings and nature, disturbing the very basis of this country, the place where we have lived ever since the foundation of the country by Dangun. While he was elaborating on the reasons for the Anti-Canal movement, the Master said that dharma lies in this mundane world, and Enlightenment is not away from it. Therefore, a search for Enlightenment out of this world is just like looking for the horns on a rabbit. 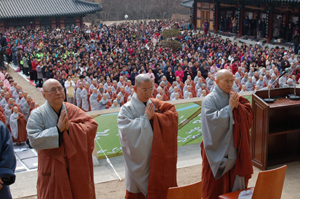 “The idea that forces Koreans to unwillingly follow should be given up,” said Soo-Kyung sunim.

The participants at this rally released an announcement, “A letter to all the people who live in the contemporary era.”  Spoken by Master Soo-Kyung, this letter says that the plan of the Grand canal is nothing but a way of making Korean people surrender to a new type of dictatorship“ Our society is being destroyed by ’materialistic violence’ in the name of economic development and construction.

The participants strongly urge that the President Lee Myung-Bak, a Christian elder, should reflect on the true meaning of “being faithful” (to the people), and that the President should bring this mammoth construction project to a complete halt.

Master Soo-Kyung further asserts, “Even if the Grand canal project is completely given up right now, our marching parade will not stop. We will keep enjoying all the scenic views along the rivers, and share a natural marvel in all forms of life with many people.

At this dharma gathering held in Bongam-sa Temple, some 300 sunims including Weol-Ju, Jeong-Kwang, Soo-Kyung, Dobeop (Chair of the Indra Net Community), Hamhyun, Cheol-San of Seon Center in Daeseung-sa Temple, Wondam of Suguk-sa Temple in Seoul, student monks from Hwaeom school of Silsang-sa Temple, and students monks from Buddhist college in Woonmoon-sa Temple as well as a National Parliament member of the United Democratic Party, Mr. Shin Myung, Mr. Yu Shimin, another lawmaker from the United Democratic Party,  Mr. Kim, Jiha, a poet, many concerned environmentalists, and Buddhists from various Buddhist organizations attended the rally. 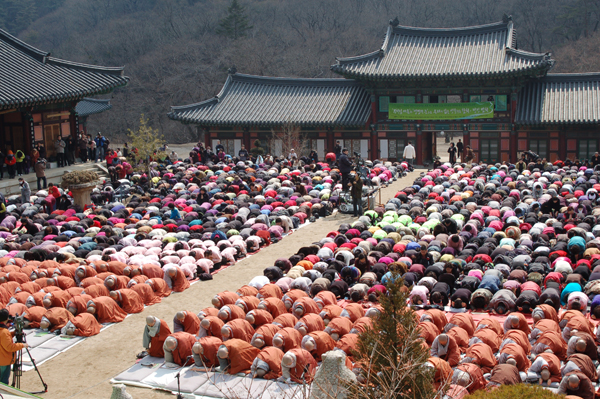